Campaign of Terror Begins for Jehovah’s Witnesses in Russia

Police in at least seven cities across Russia have conducted aggressive raids against Jehovah's Witnesses. In what appears to be a coordinated campaign, special police forces (OMON), at times wearing masks and carrying machine guns, raided Witnesses' homes, pointed guns at them, and detained both young and old for interrogations.

Arkadya Akopyan, with his wife, Sonya, and their two granddaughters

Over the past year, authorities have launched at least ten criminal investigations and jailed five Witness men, including Dennis Christensen, who has been in pretrial detention since May 25, 2017. Another Witness, 69-year-old Arkadya Akopyan, is currently on trial in the Republic of Kabardino-Balkaria. All could face prison sentences of from two to ten years merely for meeting together for worship.

On April 20, 2017, the Supreme Court of the Russian Federation banned the Administrative Center of Jehovah's Witnesses and all 395 of the Witnesses' local legal entities. During the Supreme Court hearing, the Russian government claimed that although it was liquidating the legal entities of Jehovah's Witnesses, individual Witnesses would be free to practice their faith. However, the government's claim is inconsistent with its actions.

Now that Russian authorities have successfully liquidated the legal entities of Jehovah's Witnesses and have begun confiscating the Witnesses' properties, they are turning their attack and focusing on people and their worship. It is now becoming a criminal offense for the over 175,000 of Jehovah's Witnesses in Russia to practice their faith.

April 20, 2018, Shuya, Ivanovo Region: Law-enforcement officers searched the homes of four Witnesses. The officers took Dmitry Mihailov to the police station, placed him in custody, and later released him. The authorities opened a criminal investigation and charged him under Article 282.2(2) of the Criminal Code with ‘participating in the activity of an extremist organization.’ He is not allowed to travel outside of Shuya until further notice.

April 19, 2018, Vladivostok: Police and the Federal Security Service (FSB) raided an apartment and took Valentin Osadchuk and three elderly women to the police station for interrogation. The authorities charged Mr. Osadchuk under 282.2(2) of the Criminal Code, which carries a prison sentence of two to four years, and put him in pretrial detention. On April 23, the Frunzenskiy District Court ordered to keep Mr. Osadchuk in pretrial detention until June 20, 2018. He is currently being detained at Investigation Prison No. 1 in Vladivostok.

April 18, 2018, Polyarny, Murmansk Region: Late in the evening, police and masked OMON officers carrying machine guns broke through the door of Roman Markin’s home. Officers forced him to the floor at gunpoint. His teenage daughter, on seeing the armed officers, immediately dropped to the floor and covered her head with her arms. The police searched the premises, after which they took Mr. Markin to the police station and placed him in pretrial detention.
That same evening, police searched the homes of 14 other Witnesses in the area and confiscated cell phones, electronic tablets, and other personal belongings. Police then took the Witnesses to the police station for interrogation. Local authorities initiated a criminal case against Mr. Markin, as well as against another local Witness, Viktor Trofimov. Both were charged under Article 282.2(1) of the Criminal Code with ‘organizing the activity of an extremist organization.’ If convicted, they face prison sentences of from six to ten years. Both men remain in pretrial detention in Prison No. 1 in Murmansk.

April 10, 2018, Zaton District, Ufa: Between 6:30 a.m. and 7:00 a.m., investigators and OMON officers raided and searched the homes of several Witnesses. During the searches, officers interrogated the Witnesses. In one case, an officer told one of the victims: “You will be let go as soon as you state that you are not a member of the organization of Jehovah’s Witnesses.” In another case, an officer told a victim: “We are ridding the earth of you.” All the Witnesses were taken to the police station for fingerprinting and further questioning.
While raiding the home of Mr. and Mrs. Khafizov, officers pointed their weapons at the couple and began searching the premises. After the search, a policeman grabbed Mrs. Khafizova by the arm, shoved her into the police car, and took her to the station for interrogation. Mr. Khafizov is not one of Jehovah’s Witnesses. 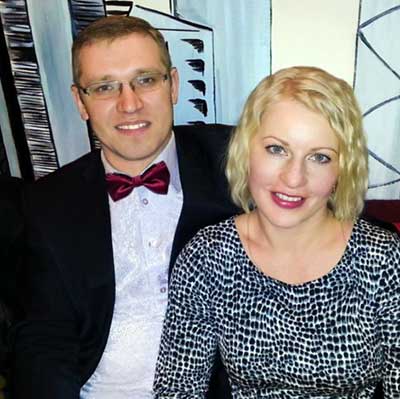 Anatoliy and Alyona Vilitkevich, prior to his arrest

Officers raided the home of Anatoliy Vilitkevich and arrested him. They told his wife that she would not see her husband “for a long time.” Authorities have charged him under Article 282.2(1) of the Criminal Code with ‘organizing the activity of an extremist organization’ and are holding him in pretrial detention until June 2, 2018. If convicted, he faces up to ten years in prison.

March 2018, Oryol: In addition to the ongoing criminal case of Dennis Christensen, the authorities initiated a second criminal investigation against another Witness, Sergey Skrynnikov, following the searches of seven homes in Oryol in May 2017. Mr. Skrynnikov has not yet been indicted. He is being charged under Article 282.2(2) with ‘participating in the activity of an extremist organization.’ If convicted, he faces a prison sentence of two to four years.

February 7, 2018, Belgorod: Large groups of law-enforcement officers raided at least ten homes of the Witnesses. The officers forcibly threw several of the homeowners to the floor or pinned them to the wall. The police searched the homes and confiscated electronic devices, passports, photographs, and money. They then took all the Witnesses to the police station, interrogated them, and released all of them except Anatoly Shalyapin and Sergei Voikov. Police detained the two men for 48 hours before finally releasing them. However, both men are not allowed to travel outside of Belgorod.

January 23, 2018, Kemerovo: Police raided and searched 12 homes of the Witnesses and confiscated all electronic devices, religious literature, and many documents. Prior to the raids, a man pretending to be one of Jehovah’s Witnesses had attended the Witnesses’ meetings and secretly recorded them and then gave the recordings to the police. Based on these recordings, the authorities initiated a criminal investigation.

Beyond these disproportionate police and FSB actions, Russian authorities have decreed that the State can seize children of Jehovah’s Witnesses for “resocialization.” On November 14, 2017, the Supreme Court Plenum of the Russian Federation ruled, in Resolution No. 44, that parents may be “deprived of parental rights by a court” if they involve their children in a religious organization that has been banned as “extremist.”

On November 23, 2017, the Ministry of Education and Science issued a nationwide “recommendation” calling for the “resocialization” of children exposed to “religious-extremist . . . ideology.” The Ministry singled out just two groups of children—those of ISIS members and those of Jehovah’s Witnesses. It noted that “tens of thousands of children and adolescents” have parents who are Jehovah’s Witnesses. No Witness children have been taken from their parents so far.

Where Does the Campaign of Terror End?

No other member state of the Council of Europe has initiated such a severe attack on a peaceful religious minority. Jehovah’s Witnesses in Russia can no longer meet openly for worship or to read and study the Bible. To avoid arrest and criminal prosecutions, they must worship in secret, as they had to do during the Soviet era.
Jehovah’s Witnesses worldwide are deeply concerned about their fellow believers in Russia and what this government-sponsored campaign will mean for them emotionally, spiritually, and physically. Philip Brumley, General Counsel for Jehovah’s Witnesses, stated: “The Russian government should stop these abuses and abide by its international commitments to respect human rights and religious freedom. Now that the authorities have shifted from attacking the Witnesses’ legal entities to imprisoning individuals, what is next for Jehovah’s Witnesses in Russia?”