International Convention «Law and Freedom of Belief in Europe, an arduous journey»

In the prestigious setting of Sant'Apollonia Auditorium at the homonymous XIV century convent complex located in Via San Gallo, in the historic center of Florence, the international convention of the European Federation for the Freedom of the Belief (FOB) took place on 18th and 19th January, under the auspices of the Secretary General of the Council of Europe (Mr. Thorbjørn Jagland), of the patronage of the Tuscany Regional Council, of the Parliamentary Assembly of the OSCE (Organization for Security and Cooperation in Europe) and of the University of Florence. 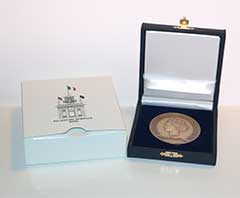 The Medal of the President of the Italian Republic was conferred to the convention. Prof. Silvio Calzolari (Secretary of FOB), presenting it together with attorney Alessandro Amicarelli (President of FOB), publicly thanked the President of the Republic “for having expressed his appreciation for FOB’s initiative, as an event of particular cultural and social value, through the attribution of a representation prize, a medal, which honors us".

After the greetings of Prof. Silvio Calzolari (Secretary of FOB), the President of the Council of the Region of Tuscany, Dr. Eugenio Giani, took the floor and brought the greetings from the administration he presides since from May 2015. It was then the turn of Honorable Riccardo Migliori, past president of the OSCE Parliamentary Assembly, who reiterated what he already expressed in Florence at the presentation of the Proceedings on 7 April 2017, namely that the importance and the goodness of FOB’s initiatives are, in fact, even bigger and more influential than FOB itself believes.

Attorney Alessandro Amicarelli presented the appeal of the Federation to national and European authorities for the protection of the freedom of belief and disbelief, and for the protection of the fundamental rights of religious minorities. This appeal calls for a concrete commitment by the various member states of the European Union to adopt the FoRB (Freedom of Religion or Belief) guidelines unfortunately still not sufficiently considered or even disregarded here and there in the countries of the Union.

Attorney Amicarelli therefore declared open the proceedings of the convention by introducing Prof. Pietro Nocita, director of the magazine Criminal Justice and past president co-founder of FOB, who moderated the first session dedicated to the 'Philosophy and theory of law', of which he was also the first speaker with a highly esteemed speech on 'The Legal Status of Religious Denominations Other Than the Roman Catholic’. 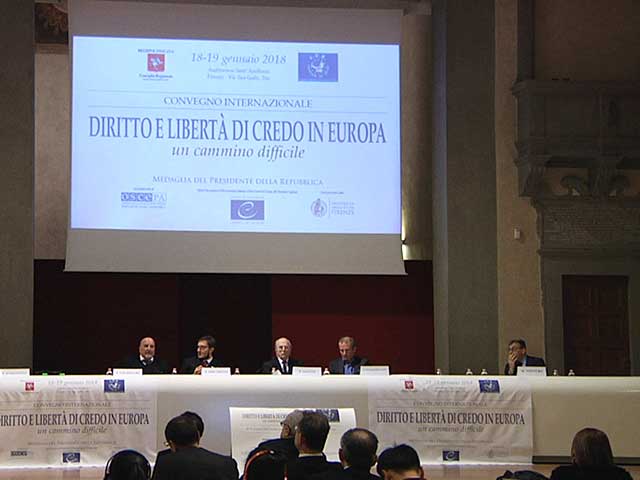 It was then the turn of the intellectual creator of the themes of the convention, lawyer Fabrizio d'Agostini of Turin and then, gradually, the rest of the speakers as per the planned program.

The convention, organized in collaboration with the associated Soteria International, the European Interreligious Forum for Religious Freedom (EFIRF), the European Coordination for Freedom of Conscience (CAP), was aimed to promote, without timidity, the defense of freedom of belief and religion in a hope for peace, peaceful coexistence and mutual respect and recognition.

Numerous members of associations working for the protection of the fundamental human rights, such as that of freedom of belief, were present: Prof. Massimo Introvigne (Center for New Religions Studies, CESNUR), Dr. Willy Fautrè (Director of Human Rights Without Frontiers, HRWF), Martin Weightman (Director of All Faiths Network, AFN), Dr. Rosita Šoryté (President of the International Observatory of Religious Liberty of Refugees, ORLIR) and many others including a large delegation of the Church of Almighty God led by Dr. Ruiqing Xu, the Imam of Florence and president of UCOI Izzedin Elzir and Dr. Andrea Bottai (National Councilor of the Italian Buddhist Institute Soka Gakkai, IBISG).

In the hall was also present a stand of Pacini Editore SpA of Pisa, a renowned publishing house established in 1872 which the reference publisher of the Federation.

Among the numerous public, in addition to representatives of the academic world including important jurists such as Prof. Francesco Onida and Prof. Giuseppe Casuscelli, also representatives of religious and spiritual communities such as Dr. Andrea Bottai (National Councilor of the Italian Buddhist Institute Soka Gakkai, IBISG), Father Fausto Sbaffoni (prior of the Florentine Convent of San Marco), and others. 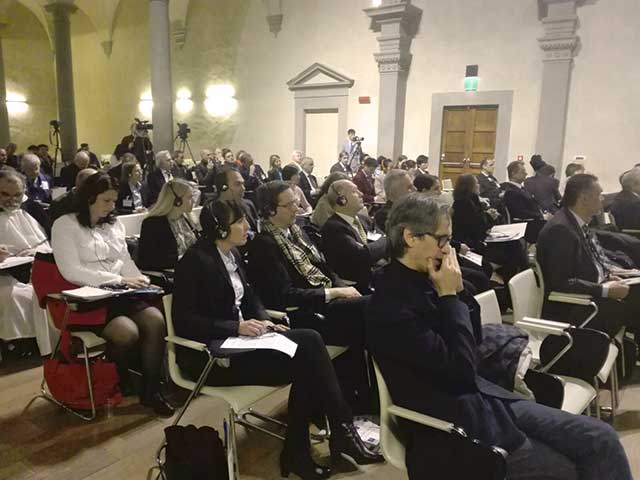 During the two days of the convention, a number of important issues were discussed, including: the sociology of religions (with a view to both the issue of religious freedom and that of the new geography of religious minorities), ecclesiastical law and the legal aspects of religious confessions, the ideological and legal obstacles to the right to freedom of belief in Europe (among which the secular state, the drift of anti-sectarianism, the alarmist propaganda against the new religious movements and the consequent attempts to establish the controversial crime of "mental manipulation").

The session moderated by Prof. Introvigne titled 'ideological and juridical obstacles to the right to freedom of belief in Europe' focused on these latter themes: the spotlight was turned on a questionable legislative initiative such as the French law About-Picard which has unjustly penalized a large number of religious groups, the lack of neutrality of the French state on these issues and the controversial FECRIS (the European Federation of Research and Information Centers on Sectarianism), an NGO (an abbreviation that literally means non-governmental organization) which, however, seems to betray its own qualification since it is financed by the Paris government, as FOB has repeatedly denounced.

The second day of the works ended with a round table attended by representatives of the various associations for freedom of belief in Europe, and during which the various representatives of the religions present reiterated the problems existing in the various countries of origin between which the existence of rights only on paper but in truth scarcely protected when not properly trampled (dramatic, in this sense, is the case of the Church of Almighty God in China). 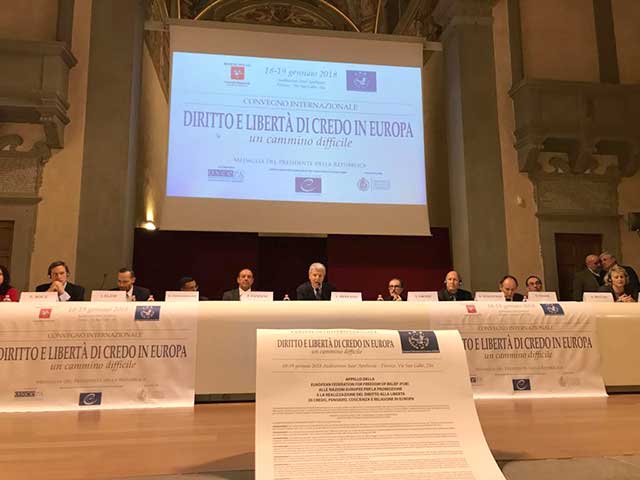 Of particular interest, for the juridical aspects that has touched, was the report of Prof. Nocita who spoke of the legislative superstructures present in the Italian legal system, which instead of guaranteeing the implementation of the Constitution diminish it or subordinate it to a machine sometimes oppressive, as well as cumbersome, especially when it comes to allowing religious minorities to have a space in society and fully assert their fundamental rights.

Equally prominent has been the report of Prof. Ventura, a European jurist, who pointed out and highlighted the inconsistencies between laws at the European level and stressed the need for the Union to put its administrative system in order by seizing the already available opportunities. In this way, the FOB convention did not just launch a cry of alarm; it also indicated a very specific path that Europe can take to improve things.

This is really necessary because, as the various speakers have gradually indicated each one from their own specialist perspective, if the existing protections are not actively maintained and guaranteed, inevitably we will end up opening the door to some liberticidal drifts.

In fact, at the end of the event, on the occasion of the final greetings, Prof. Introvigne presented a very brief but very interesting and sensitive analysis of the social genesis of religious persecutions, a phenomenon unfortunately no longer limited to dark phases of history but terribly present in various parts of the world. The spiral begins with intolerance, continues with discrimination and then leads to persecution: a thesis, this, presented during a convention held in Rome in 2015 under the aegis of the OSCE.

Covered in FOB event, was also the issue of hate and alarmism campaigns that prepare the ground for religious discrimination and violence which is a keystone of the Federation's activities: in fact, it is precisely this that makes FOB and its work even more important and crucial, that is, the objective of preserving freedom of conscience and the right to believe or not believe, not only in Italy or in Western European countries (in to which this prerogative is apparently still guaranteed), but also where there are already signs of serious and far more serious violations of fundamental rights such as Russia and China.

Widening awareness on these issues is even more important in the countries where religious freedom is apparently guaranteed, precisely because failure to intervene whenever there are signs of intolerance could result in the triggering of the mechanism of discrimination and hatred which, as a consequence, lead to discrimination, persecution and from there even faster to violent repressio.

The example brought by Introvigne, simple but very effective, is that of a little ball placed on an inclined plane: if the little ball is not stopped at the start, its descent becomes so rapid that attempts to stop it become impossible.

That’s the intent of FOB: to stop the small ball before it is too late.

The convention was graced by the short but very intense performances of Vincenzo Zitello (bardic and celtic harp) and Flavio Cucchi (classic guitar).

Go to this page to see all video recordings of the convention.