America and the Worldwide Religious Freedom

The new order contains a number of instructions for the State Department and federal agency heads when it comes to promoting religious freedom abroad. It involves civil society by saying «Religious communities and organizations, and other institutions of civil society, are vital partners in United States Government efforts to advance religious freedom around the world».

An invitation that FOB has already repeatedly accepted by participating through its President in the first two "Ministerial to Advance Religious Freedom" meetings organized by Secretary of State Mike Pompeo and held in Washington DC in 2018 and 2019.

Therefore, we cannot but rejoice at this clear stance taken by the Trump administration. We fully agree when the US President says that religious freedom «is fundamental for the flourishing of our society.» NGOs such as FOB have been preaching this for years, urging the authorities of various countries by all means. 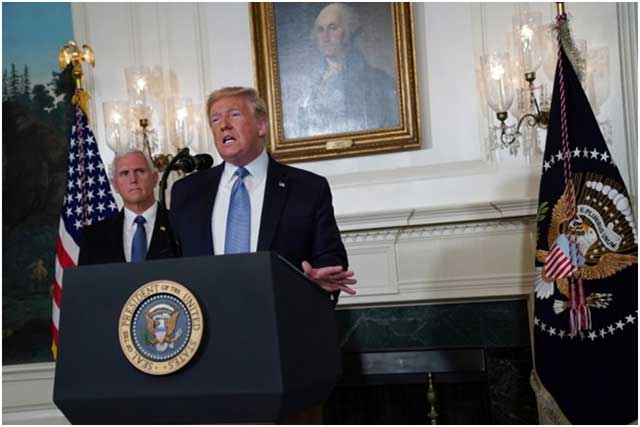 Unfortunately, the heads of governments in this part of the Atlantic apparently support the cause of religious freedom, but their statements have never resulted in anything practical to demonstrate that Religious freedom is Europe's first freedom.

On the contrary, many European states have worked to limit religious freedom in the old world. Representatives of public and political institutions at various levels have given support to the activities of small anti-religious groups, and in some cases the same state is directly engaged in activities to combat religious minorities disagreeable to some.

For example, the Republique Française, which proudly shows off the famous motto Liberté, Égalité, Fraternité, instead of urging its civil servants to protect freedom of belief, more than 2 years ago established the "Interministerial Mission in the Fight Against Cults” (MIVILUDES), through which it financed with public funds a series of private anti-religious associations and a European federation of anti-cult associations spread all over the continent called FECRIS (European Federation of Centers of Research and Information on Cults) producing a climate of intolerance and discrimination that has negatively influenced many EU countries and even non-European countries, such as Russia and China.

Germany has set up and financed a task force within the domestic intelligence service BfV (Bundesamt fur Verfassungsschutz) for twenty years aimed at spying on and prosecuting religious minorities, placing a well-known anti-cults exponent at the head of it. Even the German example has produced disasters in various European countries.

Italy instead established fifteen years ago a special police body under the Ministry of the Interior called S.A.S. (Anti Cults Team), which collaborates throughout the country with various anti-religious groups carrying out farcical investigations that have developed mainly in the media.

Instead of protecting religious freedom, the European Union itself has granted FECRIS the participatory status with the Council of Europe since 2005. In recent times they have refused to withdraw this status although abundant evidence has been provided that the activity of this group disqualifies it for that status.

Thanks to the support of some European states, anti-religious groups have negatively influenced the politics of many nations. To mention a couple of cases, MILS "consultants" exported the "French method" to China twenty years ago, contributing to the beginning of the persecution against Falun Gong, and there is evidence that they are still at work today. While in Russia Alexander Dvorkin, vice president of FECRIS, advised the Minister of Justice on "religious cults" by spreading a climate of intolerance in that great country.

It is well known that in Russia, China and other eastern countries religious freedom is a utopian dream and religious persecution reaches levels that in the West would seem horror stories. But the same abyss that exists between these countries and Europe is comparable to the abyss that divides the latter from the United States, at least in terms of religious freedom.

Unlike the U.S., Europe does not deal with violations that occur in the rest of the world, indeed it sometimes favors them. It does nothing effective to defend the religious freedom of its citizens, indeed, knowingly or not, it works to limit it.

The difference in approach is abyssal, the United States work to support religious freedom in the whole world, while the old world states travel in the opposite direction: spontaneously or suborned, they establish and finance bodies that, evidently, work to conceal that freedom. All this in disdain of the rights guaranteed by the various national constitutions and by the Charter of Fundamental Rights of the European Union.

In his recent Executive Order, however, in Section 2 "Prioritization of International Religious Freedom", Trump states that «Within 180 days of the date of this order, the Secretary of State (Secretary) shall, in consultation with the Administrator of the United States Agency for International Development (USAID), develop a plan to prioritize international religious freedom in the planning and implementation of United States foreign policy and in the foreign assistance programs of the Department of State and USAID».

Rather than finance anti-religious organizations more or less directly as happens here, the White House tenant, calls for the State Department to work with the Department of the Treasury to develop «recommendations to prioritize the appropriate use of economic tools» to advance religious freedom in countries of particular concern or on the special watch list. Under Section 3, Trump’s order stipulates that the State Department and USAID need to budget at least $50 million per fiscal year for «programs that advance international religious freedom, to the extent feasible and permitted by law and subject to the availability of appropriations.»

It is not new that the United States of America wants religious freedom to be respected worldwide. The institution of the United States Commission on International Religious Freedom (USCIRF) dates back to 1999, under the Clinton Administration, today chaired by commissioner Tony Perkins, former president of the Family Research Council (FRC), a public policy organization that provides research and advocacy on issues related to religious freedom.

USCIRF is an independent, bipartisan U.S. federal government commission, the first of its kind in the world, dedicated to defending the universal right to freedom of religion or belief abroad. USCIRF reviews the facts and circumstances of religious freedom violations and makes policy recommendations to the President, the Secretary of State, and Congress. USCIRF Commissioners are appointed by the President and the Congressional leadership of both political parties.

USCIRF Vice Chair Gayle Manchin, said in a statement that the commission has long called on the U.S. government to develop an "overall strategy for promoting religious freedom abroad" and "country-specific action plans."

"We welcome the fact that this Executive Order requires the State Department and USAID to do exactly that,” Manchin said. “We also appreciate the express reference to U.S. officials working for the release of religious prisoners of conscience, which is a high priority for USCIRF.”

Trump's order, appreciated at home, does not just set priorities, solicit interventions and finance initiatives, it goes far beyond and establishes that «programs that advance international religious freedom» should include those that «anticipate, prevent, and respond to attacks against individuals and groups on the basis of their religion,» as well as programs that «help ensure that such groups can persevere as distinct communities.»

The programs should «ensure equal rights and legal protections for individuals and groups regardless of belief, improve the safety and security of houses of worship and public spaces for all faiths and preserve the cultural heritages of religious communities.»

Outside the United States, the executive order also states that Pompeo will direct chiefs of missions in countries that are included on the State Department’s list of «countries of particular concern for international religious freedom violations and the religious freedom special watch list, to develop comprehensive action plans to inform and support the efforts» of the U.S. government «to encourage the host governments to make progress in eliminating violations of religious freedom.»

The economic tools mentioned in section 6 of the order can include «increasing religious freedom programming, realigning foreign assistance to better reflect country circumstances, or restricting the issuance of visas.» The tools can also include sanctions under the Global Magnitzky Act, which allows the U.S. to target perpetrators of human rights abuses through the seizure of U.S. assets or travel bans.

Meanwhile, Congress has passed a law that provides for sanctions against officials who violate religious freedom in China, where Christians, Uighurs, Falun Gong and other religious communities not recognized by the government are persecuted. The new rule did not please the Chinese ambassador in Washington who immediately protested on behalf of his government: «We urge the United States to remedy their mistake immediately, to stop using Xinjiang-related issues (editor's note: the Region where the persecution is more ferocious) to intervene in China's internal affairs».

"The executive order stresses that religious freedom is not just a human right," said Tom Farr, president of the Religious Freedom Institute, but "a moral and national security imperative." Farr clarified that the act offers "certainty" that the government will take attacks on believers seriously, given the adoption of "important measures".

Nina Shea, director of the Center for Religious Freedom at the Hudson Institute, said the order would encourage greater "activity in the countries that appear on the State Department's Special Watch List."

For our part, we hope that the US example inspires European governments, possibly before their countries are included in the US State Department's "Special Watch List". Not for fear of the super power with stars and stripes, but for a jolt of dignity and pride, if not civilization and common sense.

Here the copy of the executive order.