The 15th of March 2018 on the occasion of the 37th UN Human Rights Council atty. Amicarelli, chairman of FOB, has represented at the United Nations, the European Federation for Freedom of Belief at the event “Deterioration of Religious Freedom in Eastern Europe” organised by the UN accredited NGO and FOB associate, CAP-LP, Coordination of Associations and Individuals for Freedom of Belief.

Dr Amicarelli introduced the action of FOB emphasising that a number of violations, persecutions and denials of rights, as well as investigations and police raids and attacks on minority groups, occur and are being registered every year across Europe, as reported by NGOs and human rights associations, and they regard both individuals and religious groups as a whole.

Often partisan TV programs and unfair journalists, in conjunction with anti-cultic and anti-spiritual organisations such as the French FECRIS, do target specific groups and this causes these groups and their members, who are also being targeted, to be made subjects of unfair treatment. Dr Amicarelli also reported about the case of the Italian SAS, Anti Cult Squad (Squadra Anti Sette), a unit of the Police that fights against groups considered as sects and highlighted that the Council of Europe as well as the UN instruments do not allow any use of words that diminish the dignity or have a pejorative meaning such as sects and cults.

Due to the actual situation, some years ago a group of scholars, lawyers and activists and members of minority groups, that had been working together on specific projects, realised they needed to do more than just meeting for conferences every now and then, and in order to move the next level up, FOB, a federation of individuals and groups advocating the same principles and sharing the same views in respect of Freedom of Belief, was created in 2015.

After three years of work in conjunction with the federated associations FOB launched the "Call to the European Nations to promote and Implement Freedom of Belief, Thought, Conscience and Religion in Europe" by using all the legal instruments that are in place and that are many and that if correctly implemented and the relevant policies duly enforced will certainly ensure freedom of thought, conscience, religion and belief for all.

Dr Amicarelli pointed out that those States that discriminate and carry out policies against specific religious minority groups in Europe, are the same States that had agreed upon the minimum human rights standards contained in the international human rights instruments that FOB uses as means to protect freedom of belief of all the individuals, including also the refugees and those seeking international protection, that are often deported to their countries of origin were they will be likely to be persecuted as the States where they apply for refugee status consider their groups as extremist ones or as sects or they just deny the status with simplistic arguments.

FOB will keep denouncing the actions of illiberal organisations that want to destroy freedom of belief, in some cases with the support of the State authorities, as it is happening in Eastern Europe, and likewise will keep working, in a positive and propositive way, with the State authorities for the full implementation of the policies and so that international obligations are duly respected.

FOB initially presented the "Call to the European Nations to promote and Implement Freedom of Belief, Thought, Conscience and Religion in Europe" at the occasion of the International Convention on "Law and Freedom of Belief in Europe, an arduous journey" held in Florence the 18-19 January 2018 and that received the accreditation of the OSCE Parliamentary Assembly and of the Secretary General of the Council of Europe and that was also granted the Honorific Medal of the President of the Republic of Italy - the Call is now being disseminated throughout Europe. In the Call FOB recalls all the instruments protecting human rights and specifically freedom of thought, conscience, religion and belief, such as the Universal Declaration on Human Rights, the International Covenant on Civil and Political Rights, the European Convention on Human Rights, the EU Guidelines on Freedom of Religion and Belief and several other documents adopted at OSCE level and many others too. 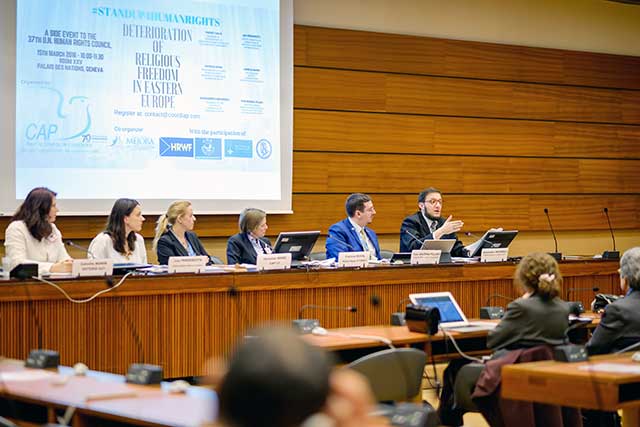 After recalling these provisions, FOB calls on States to take concrete actions to remove the obstacles that prevent the realisation of freedom of belief for all and to adopt specific measures to favour of such change, namely by banning the imposition of greater obligations for minority religions in the dissemination of religious literature, by letting the granting of spiritual assistance in prisons and hospitals, by ensuring the non interference of anti-religious and anti-spiritual organisations in the pacific life of religious and spiritual groups and of their members, by facilitating the study of different religious traditions, including also the modern and contemporary ones in a neutral way by using material produced by independent authors not by the official or majority denominations, by favouring the adoption of agreements between States and religious groups, where such type of agreements does exist, allowing the minority groups to legally exist and legally carry out their own initiatives and activities and much more.

FOB continues carrying out its activities in conjunction with and counting on the support of federated groups and individuals and thanks to the constant productive dialogue with representatives of the public authorities at different levels, nationally, Europe-wide and internationally too.