In desperation, they demonstrated before the Chinese consulates in Almaty, Kazakhstan and Istanbul, Turkey. Each had a story of persecution and abuse.

by Leila Adilzhan — It is still cold in Almaty, Kazakhstan, but this did not deter women who have their loved ones detained in Xinjiang from taking to the streets and demonstrate in front of the Chinese consulate. On March 8, Women's Day, we pay our respects to the world's women. But these Kazakh mothers, wives, sisters, and daughters got no respect from the CCP. Ethnic Kazakhs continue, together with Uyghurs and other Turkic Muslims, to be detained in Xinjiang, either in the dreaded transformation through education camps or in prisons.

Halida Akhytkhan has lost her entire family. "In 2018, she says, they arrested my three sons – Rahimbergen Satipaldi, Rahimbergen Orazjan, and Rahimbergen Ahimetjan – and their wives. Then put them all into the concentration camps. My daughters-in-law were sentenced to prison terms from 2 to 6 years, while 28 years were given to my two elderly sons, and 10 years to my youngest son." Halida is very popular on the Web, where she tells her story as a grandmother of 14 boys and girls living in Xinjiang – but she does not know where they have been taken now.

Their men are accused of "separatis” or "religious extremism.” But Gulbaran Omirali says Azamat Aibolat, the 23-year-old son of her brother, was arrested just for performing namaz, the prayer in direction of the Kaaba in Mecca, and he believed it was not forbidden. He was wrong. In April 2018, he was arrested, and he was later sentenced to 15 years in jail.

Bikamal Kaken is the wife of Alimhazi Mukhay. "I haven't seen him in the last four years, she says. I do not have clues whether he is alive or not.” She knows he was sentenced to 9 years in prison for planning to flee to Kazakhstan and sending there his family. A little girl, the daughter of Alimhazi Mukhay, also wanted to participate in the protest. "I am not well today, she says, but I still come to help my father. Dear president [of Kazakhstan], I trust you can help us to bring my father home.”

Nurjauar Muhamethan also has a brother sentenced to 12 years in prison for performing namaz, something increasingly perceived as provocative in Xinjiang. 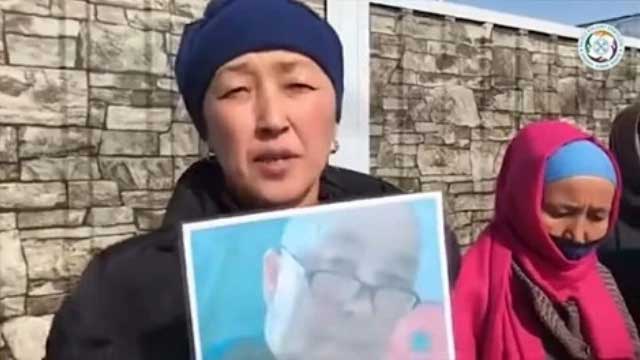 Tursingul Nurahay's husband, Zharkinbek Kasimbay, was arrested in Bole city, Xinjiang, and sentenced to 10 years in prison. "His crime was to have lived in Kazakhstan for a while, she explains, and to love the Kazakh nation and culture.”

Gulpayam Kazibek reports that her mother, Anarhan Hanatbek, was sentenced to 12 years in jail. She is now in Yining City's No. 7 Women's Prison.

Nurzat Yermekbay, has another namaz story. "My brother, Birlesbek Yermekbai, was sentenced to 12 years in prison for the reason of performing namaz,” she reports.

Kumishan Baban is the sister of the well-known singer and composer Kalysbek Baban, the author of more than 60 songs. Both he and his wife Giminkhan Bagdangul were taken to the camps in 2015. They were later released but remained under surveillance. In December 2019, Kalysbek was arrested again and is currently in a prison in the Kutubi district of the Sanji region.

Paryda Kabilbek reports that her husband, Rahizhan Zeynolla, after returning to Xinjiang from Kazakhstan, was accused of espionage and sentenced to 13 years in prison. Having served the full term, he hoped to be free, but was taken to the transformation through education camps. "All requests by relatives to meet him have been denied,” she says. Paryda had some interaction with personnel from the Chinese consulate. One told her, "What if China will conquer Kazakhstan in the future?” – words that, when reported, caused a great indignation in Kazakhstan. 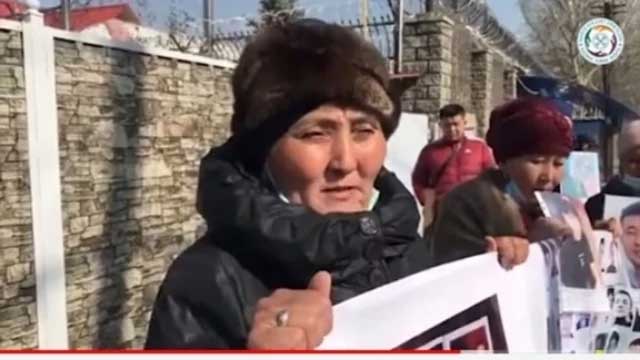 For the son of Zauatkan Tursin, a young man called Baymurat Naurizbek, it went the other way round. After he was released from a transformation through education camp, he was arrested and sentenced to ten years in prison. He is now in the Wusu jail.

In addition to Kazakhstan, women protest also in front of the Chinese consulate in Istanbul. They include Gulaisha Oralbay who advocates with her daughter Malika for two sisters and one brother – Bagila Oralbay, Baktygul Oralbay and Dilshat Oralbay. The latter, Dilshat Oralbay, is an award-winning author and translator. He was sentenced to 25 years in prison. Baktygul Oralbay was the owner of a publishing house, She was sentenced to a jail term of 19 years. Bagila Oralbay had a hair beauty studio, and got 15 years. The family was never allowed to see the court decisions, and Gulaisha suspects the reason behind the heavy sentences was that they were prominent members of the ethnic Kazakh intellectual community in Xinjiang. 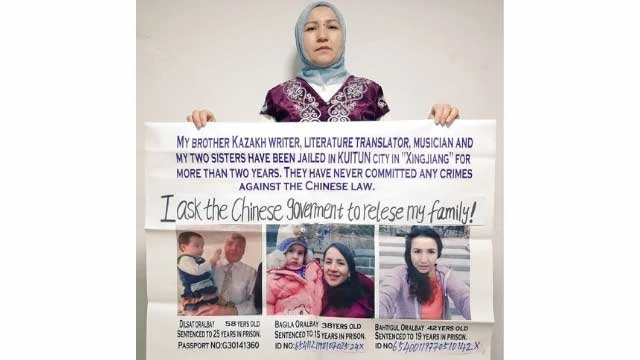 Gulaisha Oralbay advocating for her siblings in Istanbul

These women who demonstrate in Kazakhstan and Turkey are, at least, free. Others are themselves in the Xinjiang camps, where torture is common, and rape is a routine. Will women in the free world stand for the rights of the victims of the CCP?