Following the advice of the State Council, the new text no longer includes parts that would have put religious liberty at risk.

We reproduce the article written by the excellent Massimo Introvigne and published by Bitter Winter magazine to contribute to the widest possible dissemination of this important news.

On December 9, the French Council of Ministers passed an amended text of the anti-extremism law, which accepts the objections and comments of the State Council. The latter reflected the prevailing opinion about both French and international scholars.

Last week FOB published a paper by President Alessandro Amicarelli, picked up by various NGOs on their websites, in which he analyzed the dangers that this controversial draft law contained, with particular reference to Article 38 which would have created a regime of discrimination and would have limited the activities of hundreds of religions and movements.

The most dangerous provisions from the point of view of religious liberty that were included in the original text of the draft law have now disappeared.

First, the total ban of homeschooling is no longer part of the law. According to the new Article 21, homeschooling may be authorized on a yearly basis by the school authorities, for reasons including “the special situation of the child, provided that the persons responsible for his or her education justify their ability to offer an instruction in the family respecting the prevailing interest of the child.” “Religious and philosophical persuasions” are not enough to request that children be homeschooled, but the notion of “special situation” may indeed allow for a liberal grant of the authorizations.

Second, places of worship can no longer be shut down by administrative authorities for sermons or distribution of literature promoting “discrimination,” a vague concept that would have put, for example, the expression of views on abortion and homosexuality traditional in certain religions at risk. Only “incitation to violence and hate” remains as ground for shutting down a place of worship in the new Article 44.

Third, the new Article 35 authorizes the local “prefect” to prevent a religious entity from receiving funding or other help from abroad only in presence of “a threat that is real, current, and serious enough to affect a fundamental social interest.” The comments of the State Council on this delicate issue, and European Union case law, have been taken into account, even if there is still the risk that overzealous “prefects” may adopt an excessively broad interpretation of the “serious and current threats” and “fundamental social interests.”

Fourth, and most importantly, it would not be possible to liquidate by administrative fiat a religious organization because it exerts “psychological pressures” on members, or incites or commits “acts against human dignity.” As we observed in our own criticism of the law, which was shared by the State Council, “human dignity” is a concept that may be subject to different interpretations. For instance, the so-called “ostracism,” i.e. the fact that some religious organizations counsel their devotees not to associate with “apostate” ex-members turned into opponents of their former religion, is constructed by some as being “against human dignity,” notwithstanding the fact that in various countries courts of law have declared it part of the freedom of religious bodies to organize themselves as they deem fit.

The notion of “psychological pressures” is reminiscent of the scientifically discredit theory of “brainwashing,” allegedly used by “cults.” As the State Council observed, these provisions in the old text of the law may have been aimed at introducing a tool for the swift administrative liquidation of groups labelled as “cults” (sectes), without passing through the final decision of a court of law. But this would have put religious liberty at risk.

In the new Article 8, these reasons allowing the dissolution or liquidation of a religious association are no longer mentioned. 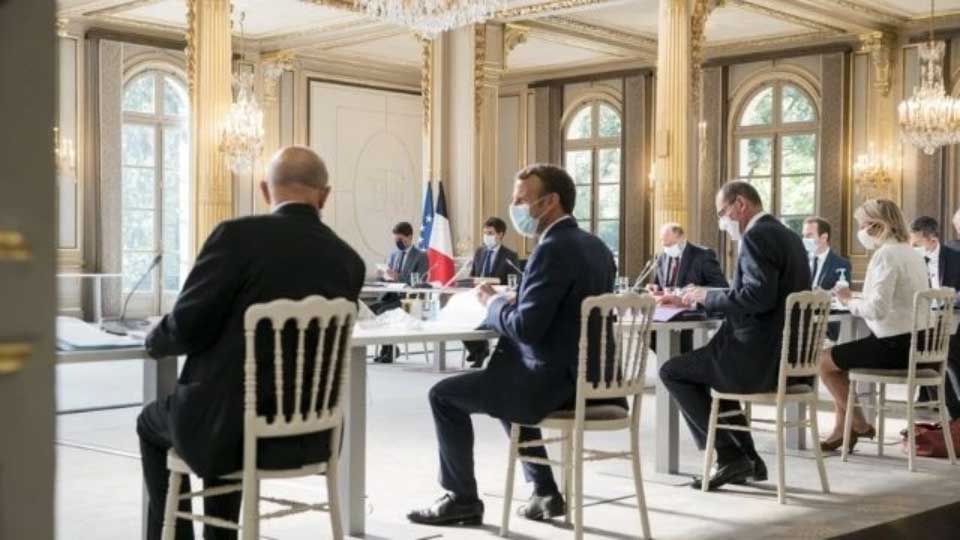 The French Council of Ministers (source: French Presidency of the Republic)

The law should now move to the Parliament, where it can be further amended. It seems difficult that the Parliament can ignore the clear remarks of the State Council, and the questions of constitutionality it raised. On the other hand, an anti-cult lobby is highly active in France and may try to include again provisions aimed a restricting the religious freedom of the groups it condemns as “cults.” Bitter Winter is proud to have participate in this important discussion, and will continue to monitor the progress of the draft law.