They said that the installation in Austria, in the cities of Vienna, Leopoldstadt and in Meidling, of some signs with the words: Achtung! Politischer Islam in deiner Naehe (Beware political Islam is near you) was just an innocent provocation. In fact, those signs indicating the presence of an Islamic site nearby was only the logical consequence of the presentation by the Minister for Integration, Susanne Raab (OeVP) of the so-called Map of the Places of Islam (Islamland karte), i.e. of mosques and Islamic cultural centres, present throughout Austria.

The publication of the map drew a great deal of criticism, first and foremost from the Austrian Muslim Youth (MJO), which threatened a legal action against the government of Prime Minister Sebastian Kurz. The Community of the Believers of Islam in Austria (Islamische Glaubens Gemeianscheft in Oesterreich, IGGIO) has also taken legal action. Minister Raab defended his action by stating that the publication of the mapping was only meant to bring "political ideologies of Islam" under control, and that it had nothing to do with the installation of the signs. In the final analysis, they were just a "provocation" by xenophobic right-wing organisations.

In any event, the publication of the map and the appearance of the posters were considered contrary to any integration policy. The Protestant Church also expressed concern, and Bishop Michael Chalupka called on Minister Susanne Raab to remove the government website mapping the addresses of organisations and those affiliated with Austrian Muslims. Criticism and protests were also voiced by Daniel Hoeltgen, spokesman for the Council of Europe, and by Turkish Prime Minister Recop Tayyp Erdogan.

This chorus of dissent was also joined by the Imam of the Milan Mosque, Yahya Pallavicini (COREIS) with an editorial published by formiche.net on 05/06/2020).

As FOB Secretary, I proposed to my friend Yahya to publish his article also on the FOB website. It is with great pleasure that we present his editorial, which I hope will be the first of many more.

The map published by the Austrian government equates every citizen of the Islamic faith and every person of culture who studies Islam with a potential criminal, provoking a witch-hunt. The intervention of Imam Yahya Pallavicini, president of Coreis, the Italian Islamic Religious Community, and coordinator of Eulema, the Council of Muslim Leaders of Europe. 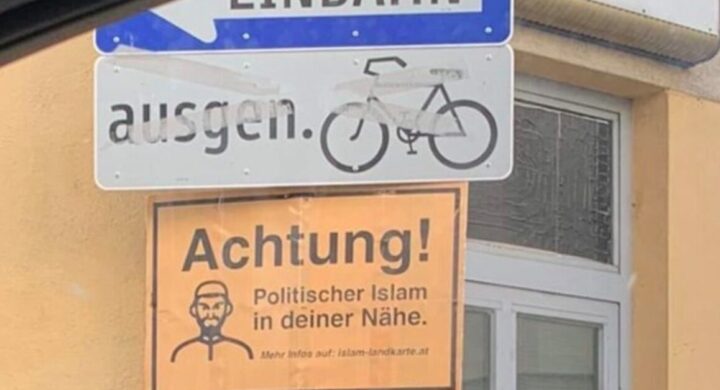 This week the Austrian government published an 'Islamic Map' with a list of addresses of private individuals, associations and cultural centres that are summarily listed as being linked to political, radical and extremist Islam. It seems that 620 mosques and organisations in the country are included in this list. The government representatives who worked on the selection of this list are unclear about the identity of those included: some say they are all potentially a threat to national security, others say it is a mapping of the heterogeneous composition of internal pluralism among Muslims in Austria. Austrian Minister for Integration Raab defends the decision to publish this list, which he believes will foster greater transparency and allow Muslims to have greater awareness.

Many political analysts and security policy experts have been critical, declaring the method counterproductive, a naive provocation to mistrust a whole community of citizens and believers. The mayor of Vienna protested against the map, and the Council of Europe issued a statement formally requesting the immediate removal of the map from the website and the protection of confidentiality of the addresses. The day after its publication, some citizens decided to celebrate this 'black list' by putting up posters in the vicinity of the addresses indicated on the 'Islamic Map' with the words: Achtung! Attention! Political Islam is next to you!

We will not comment on whether this vulgar demonstration by a minority of Islamophobes is in bad taste or whether it is a direct consequence of the short-sightedness of the Austrian government's political propaganda choices on issues of prevention and social cohesion. What we are interested in stigmatising is the return and spread of feelings of discrimination and hatred against a section of human society on the pretext of religious or cultural diversity.

This serious and at the same time gross error on the part of the Austrian government is evidenced by the confusion between Muslim associations and cultural bodies interested in Islam in Austria and the subversive branches of terrorism. In this way, every citizen of Islamic faith and every culturally educated person involved in the study of Islam is equated with a potential criminal, provoking a Muslim inquisition and witch-hunt.

This "Islamic Map" reminds us of the initial apartheid strategy against the civil liberty of the indigenous people in South Africa abolished in 1991 or the racial laws against the Jewish community in Italy repealed in 1944. In 2006, the declaration of the Human Rights Council finally defended equal opportunities and full citizenship for American Indians after "mapping" their "authorised reservations"!

As a second-generation European citizen and Muslim theologian, the dialectic of victimhood and vindication does not belong to us, it does not interest us and we leave it to those who can only vent this militancy to shout in a debate of sterile polemics and artificial quibbles. What we are interested in recalling in a constructive and serious manner is the interpretation of civilisation and intellectual openness that characterises every person who is still sensitive to the dimension of the spirit, the sacred and the universality of the human race.

The decay of every civilisation is manifested by the ostentation of a demonstration of force that excludes intelligence and the search for knowledge about the meaning of truth and depth in life and social responsibilities, thus expressing only a formalist and ideological castling of identity power. This wave or psychosis can lead to widespread and collective contagion, but in order to assert itself it must necessarily invent an enemy to oppose, attack and destroy the cultural, philosophical and spiritual articulations that have developed over centuries of human history.

The pretext of exploiting the corruption or decadence of the system or of an individual family to exasperate one's reasons for a revolution or ethnic cleansing or general demonisation is part of the brainwashing of the false masters of these extremist currents that are well known to experts in the prevention of anti-radicalism, both when it degenerates into terrorism and when it takes on the guise of a government party.

The emergency, after the effort to save the lives and health of mankind from the pandemic, is to find an effective antidote to this political and intellectual crisis that can only provoke and propose new ghettos, separatism, prescription lists, prohibitionism, protectionism, all groundless solutions to false problems decontextualised from reality and exaggerated to fill the ignorance about the nature, function and destiny of man.

Enlightened rulers, honest scientists and humble and sincere teachers of every religious doctrine have been able to contribute throughout history to providing answers and tools, satisfying the thirst for research of people still able to interpret the reflection of human dignity in the memory of God and in responsible respect for life in the world. This interdisciplinary, multi-religious and depersonalised alliance needs to be enhanced in order to continue to provide an orientation of wisdom in the awareness of the subversion and infiltration taking place among the currents of thought and power in the West that are contrary to the roots and vision of the fathers of Europe.

What is at stake is the freedom and dignity of religious pluralism, but also the continuity of a civilisation.