The President of the European Federation for Freedom of Belief (FOB) Attorney Alessandro (Alex) Amicarelli, participated to the opening event held at the American Senate that marked the beginning of the Religious Freedom Week organized by Secretary of State Mr Michael Pompeo in Washington. Together with CESNUR* director Prof. Massimo Introvigne and and Mrs Rosita Šorytė, Lithuanian diplomat and President of ORLIR**, Mr. Amicarelli is actively working to help members of several minority groups overcome persecution, including also among others, the Church of Almighty God, a Chinese new religious movement originated in China in the 1990's, that was present with a delegation. The President of FOB said: "Over the last years we have witnessed an increasing culture and practice of violence and intolerance against religious minorities, particularly in some areas of Russia and in China; the Western countries not being totally unaffected by such problems" and he also added "There is an actual need for increasing the standards of protection and implementation of Freedom of Religion and Belief in the world. We really appreciate the initiative of Mr Pompeo who had the great vision of organizing such an important event gathering experts from several countries" and then he concluded by saying "Today we make a call to all the people of good will, and there are many in the world starting from all of us here today: Let's stay united and keep working together. Let's make all our efforts worth and work more. Let's educate the youth to the importance of freedom of religion and belief. Let's keep lobbying the MPs, and the other State representatives making them aware of all the issues pertaining to religious and spiritual minorities. Let's work together to make freedom of religion and belief a reality for all without exception!"

24 July 2018 – The first side event of a week centered on the meeting of 80 foreign ministers in Washington D.C. was hosted by Bitter Winter and devoted to the persecution of Uyghurs, Falun Gong, and The Church of Almighty God in China.

80 foreign ministers arrived in Washington DC on July 23, invited by U.S. Secretary of State Mike Pompeo for the first ever “Ministerial to Advance Religious Freedom,” which will continue throughout the week.

In addition to the plenary meeting, a number of side events are also scheduled, some of them on Capitol Hill. The first side event was hosted by Bitter Winter together with a number of religious communities persecuted in China. Editor-in-Chief Massimo Introvigne introduced Bitter Winter, discussed “reformation through education camps” in China and the massive fake news campaigns launched by the Chinese Communist Party to defame The Church of Almighty God and other groups it persecuted as “heterodox.”

Rosita Šorytė, president of the International Observatory of Religious Liberty of Refugees (ORLIR), called for an increased awareness of the persecution in China, which should lead to asylum be granted to refugees of The Church of Almighty God. She also mentioned the Zou Demei case in Detroit, where a leader of the same Church faces deportation back to China, where she may be executed.

Attorney Alex Amicarelli, president of the European Federation for Freedom of Belief (FOB), detailed the cases filed with the U.N. Working Group on Arbitrary Detention in Geneva against China on behalf of two members of The Church of Almighty God detained in China. Before the discussion, the audience heard moving testimonies from and on behalf of victims of torture in China of The Church of Almighty God, Falun Gong, and Uyghurs. Stories of one million Uyghurs detained in the dreaded camps, including soccer stars, actors, intellectuals, of torture and organ harvesting of Falun Gong members, and of systematic violence against the Christians of The Church of Almighty God moved to tears the audience, which included academics, seasoned politicians and diplomats, and human right activists. 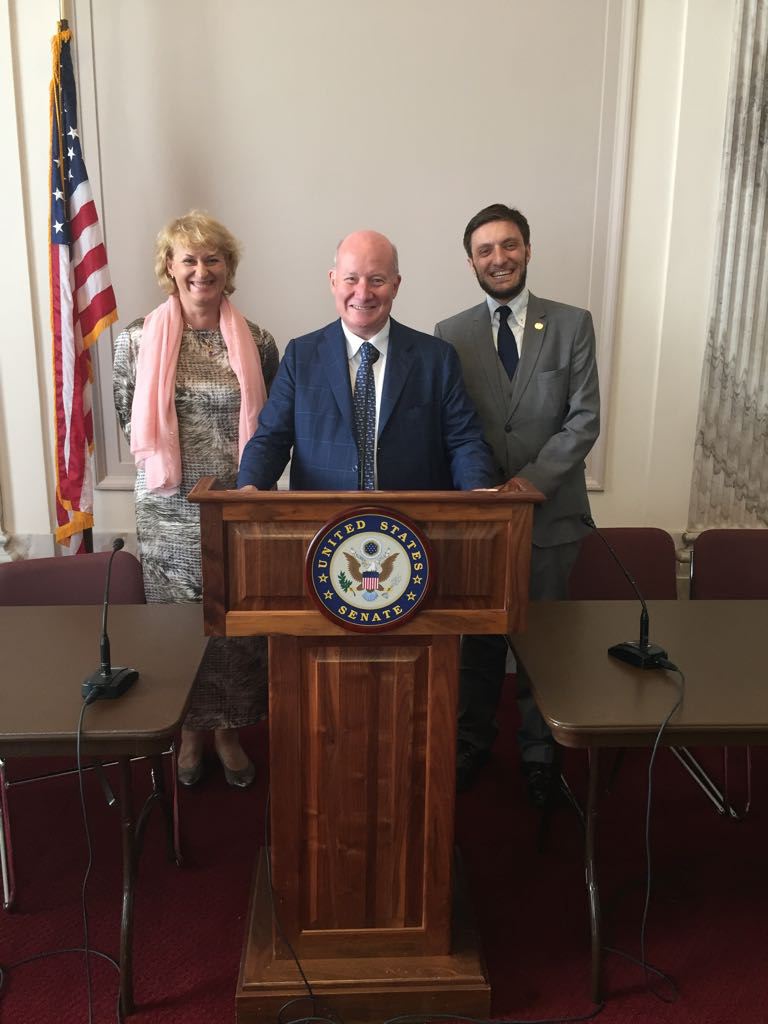