by Marco Respinti — On Monday, February 22, 2021, the House of Commons of the Canadian Parliament in Ottawa voted to support a motion, which formally recognizes as genocide the crimes committed by the Chinese Communist regime against the people of the Xinjiang Uyghur Autonomous Region (XUAR), which its Muslim Uyghur and other Turkic inhabitants call East Turkestan.

The measure passed with 266 votes to zero. It was introduced by the Conservative Party on Thursday, February 18. The Liberal Party, which leads the government, abstained.

While it also urges the Canadian government to follow on the same line, it contains an amendment, proposed by Bloc Quebecois MP Alexis Brunelle-Duceppe, which calls on the International Olympic Committee to move the 2022 Winter Olympic Games out of China, if the genocide continues. This amendment passed with 229 favorable votes to 29.

Of course, when it was announced that the House would vote on the motion, Beijing reacted strongly. On Saturday, February 20, the Chinese ambassador to Canada, Cong Peiwu, said that there “is no so-called ‘genocide’ in Xinjiang at all” and that the then-announced vote amounted to interference in Chinese domestic affairs.

Monday’s motion followed a very important 58-nation initiative, launched by the Canadian government itself on Monday 15. Its aim is to prevent countries from detaining foreign citizens for diplomatic leverage: a statement relevant in itself, but of course even more so in Canada, where the fate of Michael Spavor and Michael Kovrig remain uncertain. Spavor and Kovrig are Canadian nationals whom Beijing has been detaining for more than two years, following the arrest in Canada of Huawei’s Ms. Meng Wanzhou, the executive of the top Chinese telecommunication company accused of manufacturing the most sophisticated high-tech system for spying and controlling people in China and abroad. Punctually, China labelled this decision as “hypocritical and despicable.” 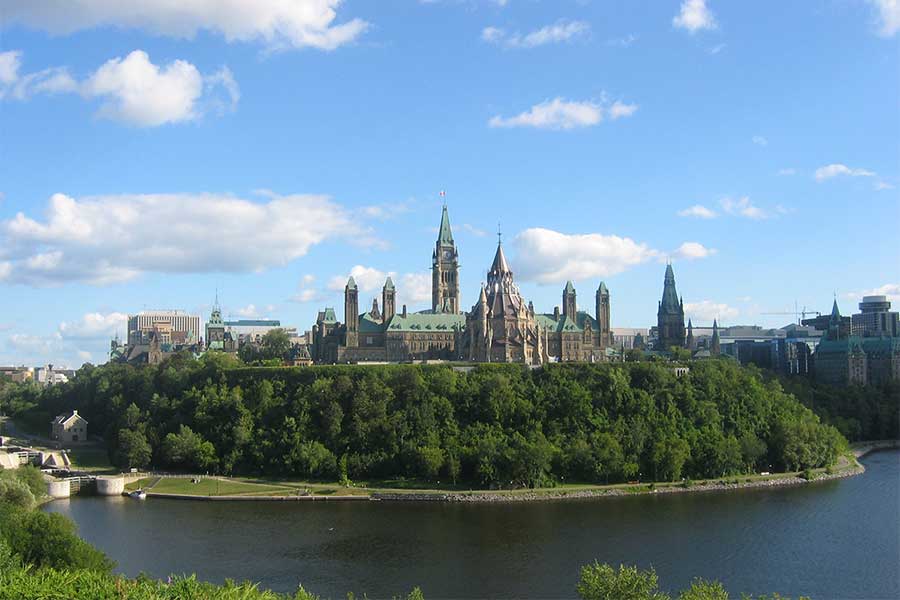 The Canadian Parliament in Ottawa (credits)

Monday’s vote has been in the air for a while. On October 21, 2020, the Subcommittee on International Human Rights of the Standing Committee on Foreign Affairs and International Development of the Canadian House of Commons released a statement calling the persecution of the Uyghurs a genocide. Then, on January 24, 2021, two Conservative MPs, Michael Chong and Garnett Genuis, urged the Canadian government to officially condemn China for its treatment of Uyghurs and other ethnic and religious minority groups, using again the word “genocide.” This came after two important precedents, one foreign and one domestic.

Just across the border, former US Secretary of State, Mike Pompeo, left office on January 20 stating that China is committing genocide in Xinjiang. Soon after, his successor under the new Administration, Antony Blinken, repeated the same word, once more provoking Beijing’s strong protests. Domestically, even before the US, the Canadian government announced a “comprehensive approach” “in coordination with the United Kingdom and other international partners” to defend “the rights of Uyghurs and other ethnic minorities” in XUAR. In a joint statement on January 12, the Canadian minister of Foreign Affairs, François-Philippe Champagne, and the minister of Small Business, Export Promotion, and International Trade, Ms. Mary Ng, announced “measures to address the risk of goods produced from forced labour from any country from entering Canadian and global supply chains and to protect Canadian businesses from becoming unknowingly complicit.”

The announced measures include “the prohibition of imports of goods produced wholly or in part by forced labour; a Integrity Declaration for Canadian companies; a Business Advisory on Xinjiang-related entities; enhanced advice to Canadian businesses; export controls; increasing awareness for Responsible Business Conduct linked to Xinjiang; and a Study on forced labour and supply chain risks.”