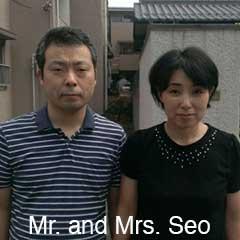 Japanese judges confirm that kidnapping and detaining believers for the purpose of coercively “de-converting” them is a crime.

by Willy Fautré — On 27 November, the Hiroshima High Court in Japan found guilty five persons involved in the kidnapping and confinement of a married couple for the purpose of forcibly de-converting them. The accused will have to pay damages to the victims: 610,000 yen (about 6,100 EUR) to the husband and 1,110,000 yen (11,100 EUR) to the wife.

In July 2014, Koji Seo and Yuko Seo were kidnapped by their own families for forcing them to leave the Unification Church founded by Reverend Sun Myung Moon (UC). The whole operation was then masterminded by Pastor Mamoru Takazawa, a well-known recidivist in these matters.

As a rule, in Japan, the few cases that managed to reach a court were never recognized as criminal cases. Seo’s case did not escape “the rule.” They finally managed to file a civil lawsuit in May 2016.

Originally, eight persons were in the dock:

However, two of them died during the proceedings. Pastor Takazawa passed away in 2015 before the civil lawsuit was filed in May 2016, and Etsuji Seo died before the first judgment by the Hiroshima District Court was issued on 18 February 2020.

Miyuki Kubo was instrumental in convincing the parents to kidnap and confine their (adult) children. She also played the role of guardian in the confinement apartment under the direction of Pastor Mamoru Takazawa, for the purpose of forcing Koji and Yuko Seo to leave the UC. Masahiro Kubo, her husband, was an accomplice in the kidnapping and transporting of the couple.

Who was Pastor Takazawa?

Pastor Takazawa recognized his involvement in several court cases of abduction and deprivation of freedom for the purpose of de-conversion.

In the final decision of the case brought by Kozue Terada against her kidnappers — her parents, Pastor Takazawa and Atsuyoshi Ojima (a lay assistant at a Lutheran Church) —, the Osaka High Court (9th Civil Section) ruled on July 22, 2004 that Kozue Terada’s parents and Takazawa had jointly perpetrated an illegal act by imposing “persuasion sessions” against her will, in a situation where she was under physical restraint, and condemned them to jointly pay 200,000 yen (about 2,000 EUR) for depriving Kozue Terada of her freedom of movement (joint tort). Ojima was declared innocent on the grounds that his persuasion activity had been limited to a “conversation,” which was not illegal.

The defendants decided not to appeal the judgment of the High Court, which is therefore final.

The first case when the Japanese courts sentenced kidnappers and deprogrammers was the well-known case of Toru Goto, who was abducted and confined during 12 years and five months, from September 1995 to February 2008. On November 13, 2014, the Tokyo High Court issued a ruling ordering five people (three close relatives of the victim, an Evangelical pastor, and another person) to pay damages to Toru Goto. His brother, sister-in-law, and younger sister were ordered to pay together the total amount of 22 million yen (about 220,000 EUR). The professional deprogrammer, Mr. Takashi Miyamura, was ordered to pay 11 million yen (110,000 EUR).

As the confinement period of Mr. and Mrs. Seo was less than a week, the damage estimation can be considered much better in comparison with Toru Goto’s case.

“The Report of the UN Human Rights Committee on Japan in 2014 had a very influential role in the decision of the Japanese court. It was the result of your efforts and we appreciate it very much,” said Norishige Kondo from the Family Federation for World Peace and Unification-Japan (FFWPU-J) to Human Rights Without Frontiers (HRWF).

In December 2011, HRWF published a report titled “Japan: Abduction and Deprivation of Freedom for the Purpose of Religious De-conversion” based on interviews of UC victims conducted in Tokyo, Seoul and Barcelona in 2010-2011. And in July 2013, HRWF contributed to the 111th session of the UN Human Rights Committee with a report titled “Abductions and confinement for the purpose of religious de-conversion”.

After the case of Mr. and Mrs. Seo, the Unification Church, which claimed over 4,000 cases of kidnapping and deprogramming attempts from 1966 to 2011 with a peak for the years 1987-1995, did not have any more incidents to report.

Willy Fautré, former chargé de mission at the Cabinet of the Belgian Ministry of Education and at the Belgian Parliament. He is the director of Human Rights Without Frontiers, an NGO based in Brussels that he founded in 1988. His organization defends human rights in general but also the rights of persons belonging to historical religions, non-traditional and new religious movements. It is apolitical and independent from any religion. He has carried out fact-finding missions on human rights and religious freedom in more than 25 countries. He is a lecturer in universities in the field of religious freedom and human rights. He has published many articles in university journals about relations between state and religions. He organizes conferences at the European Parliament, including on freedom of religion or belief in China. For years, he has developed religious freedom advocacy in European institutions, at the OSCE and at the UN.