Ma Zhiwu, from Ningzia Hui Autonomous Region, has been in prison for most of the last twenty years. He will remain there for the next decade and more.

by Marco Respinti — On December 17, 2020, Ma Zhiwu, a Falun Gong practitioner from the predominantly Muslim Ningzia Hui Autonomous Region was sentenced by the Guyuan Intermediate Court to 14 years in jail, both under article 300 of the Chinese Criminal Code, which punishes those active in a banned religious group labeled as xie jiao (“heterodox teaching,” often wrongly translated as “evil cult”), and for allegedly “inciting subversion of the power of the state.”

Ma, who worked as a driver for the Safety Supervision Office of Ningxia Yinchuan Railway Branch, started practicing Falun Gong in 1998, when he was 27. He had picked up the wrong time, as the CCP’s massive crackdown on Falun Gong will start in 1999. 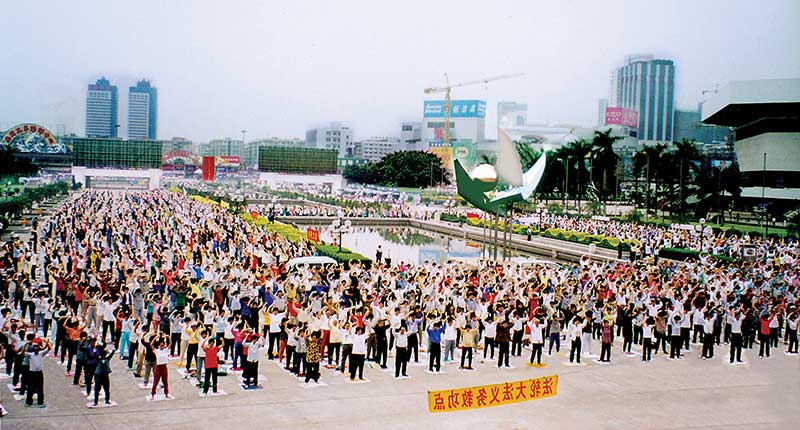 By the mid-1990s, Falun Gong exercise sites with thousands of participants, like this one in Guangzhou, were a common sight throughout China (credits)

Ma was promptly arrested, and sentenced to three years in a laogai, a reeducation through labor camp. According to Rights Defender, who is advocating for Ma as a prisoner of conscience, he was repeatedly tortured.

After serving his term in the laogai, he continued to protest against what he saw as an unjust detention. He was arrested again and, as a recidivist, was sentenced by the Guyuan Intermediate Court to another six years in jail.

Upon his release, he was kept under surveillance. The police concluded he was still active in Falun Gong, and arrested Ma for the third time. On September 12, 2010, he was sentenced by the same Guyuan City Intermediate Court to a jail term of three years and six months.

Upon his release, he lived in different parts of China, but in June 2020 decided to return to Ningxia, where the unemployed Ma believed it would have been easier to find a job. But as soon as the local police knew he had returned, he arrested him again. On June 25, his arrest was recorded, and he was committed to trial.

This time the Guyuan City Intermediate Court regarded Ma as a particularly serious case of recidivism, and sentenced him to 14 years in jail. He will remain in the Guyuan City Detention Center until 2034. By then, assuming he will be still alive, Ma will have spent in jail 26 and a half years out of the 36 since he converted to Falun Gong, all for the only crime of practicing and propagating his religion.

(Credit image at the top of page: Joffers951)