by Massimo Introvigne — Lithuania, which suffered itself Communist persecution, is the third country in Europe after the Netherlands and the United Kingdom whose Parliament has officially declared the horrors China is inflicting on the Uyghurs a “genocide.” Outside Europe, similar declarations came from the United States and Canada.

The vote of May 20 by the Lithuanian Parliament is important, because Lithuania is the first country that is part of the Belt and Road Initiative to take such a brave stand on the Uyghur genocide, showing to other countries that Belt and Road memorandums cannot tie the hands of democratic countries when human rights are at stake.

In fact, the resolution, passed in the Seimas, the Lithuanian Parliament, with a vote of 86 to one and seven abstentions, goes beyond Xinjiang, and indicts the CCP for its massive violations of human rights and religious liberty.

Lithuania, the document says, “strongly condemns China’s massive, systematic and grave human rights violations and crimes against humanity.” It asks “the United Nations to initiate a legal inquiry into the Uyghur genocide in Xinjiang detention camps,” and calls on the European Parliament and the European Commission “to review the EU’s cooperation policy with China and formulate a clear position on China’s massive, systematic, and serious human rights violations, crimes against humanity, and the Uyghur genocide.” 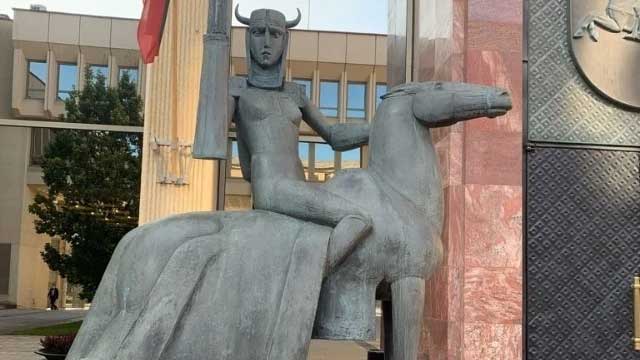 Statue of Grazina, the main character of a poem by Adam Mickiewicz and a symbol of freedom, in the Great Courtyard of the Lithuanian Parliament. Photo by Massimo Introvigne.

The text also mentions Hong Kong, calling for the revocation of the National Security Law, and Tibet, where it urges China to lift “restrictions on freedom of expression and political rights,” admit “independent human rights experts to Tibetan territory,” and open “a dialogue with the Dalai Lama on preserving Tibetan cultural and religious heritage, and restoring freedom of religion.”

This is the most comprehensive parliamentary document passed to-date on the CCP’s genocidal practices, and the Chinese reaction has been predictably furious.  In an official answer, the Chinese Embassy in Vilnius called it “another shoddy political show based on lies and disinformation.” The document, said the Chinese Embassy, “grossly interferes in China’s internal affairs of Xinjiang, Hong Kong and Tibet and domestic policies against cult and any other illegal religious activities and gravely violates the basic norms governing international relations. The Chinese side expresses indignation and strong condemnation,” and believes that “these moves are doomed to shameful failure.”

Having condemned Lithuania’s alleged interference in China’s internal affairs, Chinese “wolf warrior” diplomats immediately interfered in the internal affairs of Lithuania, as they called on “visionary people upholding justice in Lithuania” to protest the parliamentary resolution.

What is more likely to happen is that more “visionary people upholding justice” would manifest themselves around the world, and cause other countries to join in condemning the different genocides perpetrated by the CCP—and follow up with appropriate political and economic measures.