The notorious Alexander Dvorkin and some of his friends claimed they are those who are persecuted—by the U.S. and Bitter Winter.

by Massimo Introvigne — Imagine if Cheng Quanguo, the CCP Secretary in Xinjiang who is under sanctions in the United States for his crimes against humanity, appeared in the West claiming he is persecuted by the Uyghurs and their friends in the democratic world, and hailing his concentration camps as model practices other countries should imitate. Or, in the 1930s, if Heinrich Himmler and Joseph Goebbels had lectured at a conference in Paris introducing themselves as victims of a persecution by the Jews, their American supporters, and the scholars who had written against Nazi anti-Semitism. Comedians who would propose this as a satirical show would be accused of bad taste.

Yet, this is precisely what happened last month in Paris, when a man accused by the United States and by Western (and some Russian) scholars of masterminding the worst Russian violations of religious liberty lectured, supported by a handful of friends, promoting what happens in Russia as a model, and claiming that he is the real victim of persecution.

In 1992, Alexander Dvorkin, a Russian who had become an American citizen, returned to Moscow from the United States, where he had spent fifteen years, converted to Orthodox Christianity, and embraced the theories of the anti-cult movement. Back in Russia, he was hired by the Russian Orthodox Church to coordinate its activities aimed at suppressing competition from both domestic and imported religious groups, which were now free to operate after the fall of the Soviet regime.

After Russia had passed laws allowing the courts to ban religious groups labeled as “extremist,” in 2009 Dvorkin was appointed as head of the government’s Council of Religious Experts, with a crucial role in designating which groups should be regarded as “extremist” and repressed or “liquidated,” as happened to the Jehovah’s Witnesses in 2017. Dvorkin also tried to export the Russian model of repression abroad, visiting China and Hong Kong to support the regime’s crackdown on groups labeled as xie jiao and becoming the vice-President of the European anti-cult federation FECRIS, originally created in France at the same address of the French anti-cult organization UNADFI, which is still a member organization. In 2020 USCIRF, the United States Commission for International Religious Freedom, asked the American government to publicly censor Dvorkin and FECRIS “for their ongoing disinformation campaign against religious minorities” and for supporting religious persecution in Russia.

On February 25, 2021, Dvorkin appeared at a conference organized in Paris under the inoffensive title “Nation State and the New Transnational Forms of Religious Consciousness,” sponsored by the International Center for the Study of Eurasia, which appears to be mostly operated by Russians. His speech was, in its own way, extraordinary.

Besides being an egregious example of a persecutor passing himself off as a victim, the speech shows what kind of ideology supports Russia’s policy against the religious minorities it labels as “cults” (which Dvorkin calls when speaking in English “totalitarian sects”).

Dvorkin claimed that “in the 1990s, the new Russia, painfully acquiring its shape, faced a massive invasion of totalitarian sects, which instantly attracted thousands and tens of thousands of new adherents to their ranks… The Gorbachev Law on Freedom of Conscience (1990) contributed to giving the cults free rein, and they achieved spectacular successes.”

Thanks to the efforts of Dvorkin and the Russian anti-cult movement, Russian legislation was changed, and “a new law on freedom of conscience and religious organizations was passed in 1997. The law was the result of difficult compromises and agreements, but still, to a certain extent, it made it possible to limit the activities of cults. The real progress in the Russian state’s attitude toward cults began sometime after 2015, and more or less coincided with the deterioration of Russia’s relations with Western countries.”

This “deterioration,” Dvorkin claimed, had the positive effect of favoring the repression of “cults.” “Legal actions began, which could no longer be delayed or stopped through political will (as was the case in Yeltsin’s years), since relations with Western partners were already bad and deteriorating at any rate.” The result was that “a number of cults, the most famous case being the Jehovah’s Witnesses, were banned in Russia under the laws against extremism,” and other groups are now targeted.

On the one hand, “while many Western countries that once set an example in the fight against cults, such as France, Germany, Belgium, and Austria, are gradually revising their positions under U.S. pressure, Russia, on the contrary, is stepping up its anti-cult fight.” This does not seem to be true about France. On the other hand, Dvorkin acknowledged that Russian campaigns were not entirely successful, with “cults growing stronger and gaining connections.” Dvorkin blamed Western scholars such as “Eileen Barker, Massimo Introvigne, James Richardson and others [who] made frequent visits to Russia, both at the invitation of the cults (to speak at trials, at scientific venues, at hearings before government agencies, etc.) and at the invitation of secular institutions.”

About the undersigned, since Dvorkin cannot be misinformed about what happens in his field in Russia, he is just consciously lying. I am not a “frequent” visitor to Russia, and have never been there invited by new religious movements, but have spoken at four conferences on religious liberty in Moscow.

One was organized by the Russian Orthodox Church, the second by the Department for Inter-Regional Cooperation, National Policy and Relations with Religious Organizations of the City of Moscow, the third and the fourth by the St. Gregory the Theologian’s Charity Foundation, founded with the participation of Metropolitan Hilarion of Volokolamsk, chairman of the Department of External Church Relations of the Russian Orthodox Church (who called me in an interview “a well-known Italian sociologist and scholar of religion”).

Perhaps Dvorkin regards the part of the Russian Orthodox Church who does not support his radical positions as a “cult.” The only instance he found where I lectured to members of what he calls “a small but extremely destructive cult” was to the Applied Sciences Association in Odessa. Apart from the fact that this Association is not, strictly speaking , a religious movement, Odessa happens to be in Ukraine—although, considering his extremist political positions, perhaps Dvorkin also claims Odessa for Russia. 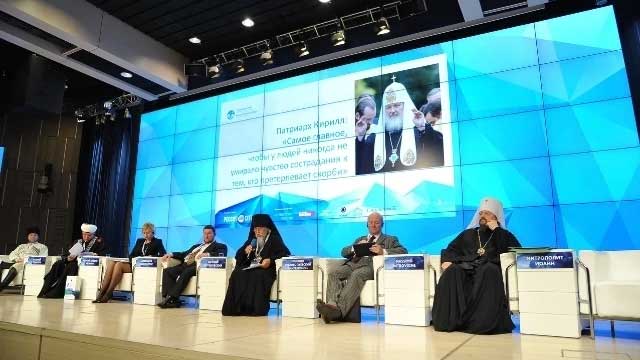 Massimo Introvigne at the Forum organized by the Department for Inter-Regional Cooperation, National Policy and Relations with Religious Organizations of the city of Moscow, October 16, 2014.

Through our writings and trips to Russia (real or imaginary), Dvorkin added, Western scholars of new religious movements corrupted a “new generation” of “Russian sociologists of religion, some of whom were trained in the West.” When they joined the efforts of the U.S. governments and Western scholars, Dvorkin found himself persecuted. Or so he claimed: “International campaigns of hatred and defamation are conducted against representatives of the anti-cult movement. In Russia, all this is personified primarily in my humble persona, against whom the cults, their engaged defenders and, alas, the U.S. State Department and Congress, which have long joined this campaign and support totalitarian sects, have united.”

Playing the anti-Western and anti-American card is common in Russia, but what is interesting is Dvorkin’s attempt to sell his toxic merchandise in the West. He came to the conference accompanied by some minor sidekicks, including Gerry Armstrong, an American anti-cult activist who in 2014 wrote to Vladimir Putin calling him a victim of “massive Western campaigns” of “black propaganda,” and asking Russia to intensify its persecution of Scientology.

Another FECRIS anti-cultist called Luigi Corvaglia contributed two of his bizarre pet theories he normally presents in obscure Italian publications, that USCIRF is just a bunch of Christian Republicans who engage in “hate speech,” and that Bitter Winter is the only source claiming that The Church of Almighty God is persecuted in China.

Obviously, USCIRF is a bipartisan commission of the U.S. federal government whose members are selected by the President of the U.S. and the Congressional leaders of both parties, Democrat and Republican.

The current USCIRF chair is a Democrat, and when the report criticizing Dvorkin and FECRIS was prepared, the USCIRF chair was a Buddhist. Well before Bitter Winter started being published, several countries had recognized the persecution of The Church of Almighty God and granted asylum to its refugees.

While we are flattered by the importance anti-cultists attribute to Bitter Winter, we are not the main source of information about the heavy jail terms Church of Almighty God members are sentenced to in China. The main source is the Chinese government itself, which regularly publishes such decisions in its mammoth data base of court cases.

A conference where such theories were seriously presented raises questions about its motivations. As a footnote, I was asked to participate with a paper on “cults and sects,” and answered with a mail dated January 14, 2021, that, “as you may know, I do not use the notion of ‘sect’ and ‘cult,’ and believe such categories do not serve any useful scientific purpose.” On January 15, the organizers answered that they “want[ed] to bring together different expert points of view on the subject and have a meaningful discussion’’ and insisted they would like to include my different perspective. Two days before the conference, on February 23, they wrote that, “Due to the unforeseeable circumstances we have to cancel the session of our conference where your participation was scheduled.” Perhaps it was the word “conference” that had created a misunderstanding. At least in its part about Dvorkin and “cults,” this was not a scholarly conference intended for a “meaningful discussion” between “different points of view,” but a shameless propaganda event defending the Russian repression of religious liberty.