The Ghent Case Against the Jehovah’s Witnesses: A Chronology Below is a timeline presented at the Webinar by Willy Fautré. 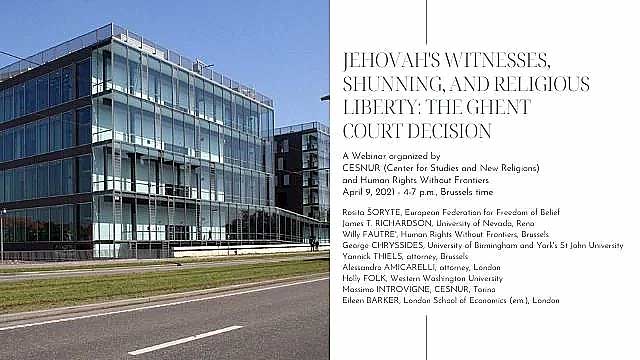 The criminal investigation that got into the spotlight earlier this year did in fact start in 2015.

Who are the claimants?

The statements of the claimants

The position of the CCJW

The verdict and its consequences

On 19 March 2015, a former Jehovah’ Witness who had freely chosen to recant his faith, filed a criminal complaint against the Christian Congregation of the Jehovah’s Witnesses in Belgium (CCJW).

On 5 January 2016, Substitute Public Prosecutor Isabel de Tandt transmitted the criminal file to the Federal Judicial Police. She stated in her cover letter that this is “a file against the Jehovah’s Witnesses regarding defamation and, more specifically, regarding their defamation policy.”

On 29 January 2016, the Federal Judicial Police issued a Pro-Justitia listing the CCJW and its Board of Directors as the subjects of the criminal investigation.

On 10 April 2018, after over two years of silence, the Public Prosecutor officially notified the CCJW of an investigation that had been ongoing since January 2016. Three CCJW board members were then invited for a hearing.

On 15 May 2018, the CCJW responded to that invitation by a letter to the Federal Judicial Police of East Flanders in which it requested a number of details about the criminal investigation: the grounds of the accusation and the author thereof. In its letter, the CCJW specifically addressed the issue of disfellowshipping and stressed that courts in Liège, Mons and Brussels had confirmed this practice is protected under Article 9 of the European Convention on Human Rights.

In that letter, the CCJW indicated its objections to the investigation (due to the little information provided by the police) and asked the Public Prosecutor to dismiss this investigation but indicated, “Of course, we are fully prepared to work with you to clarify this issue”. There was no response whatsoever to this offer.

On 13 May 2020, after two more years of silence by the judicial authorities, the CCJW received a copy of the 11 May 2020 summons charging it with crimes under Article 22 of the Anti-Discrimination Act.

The main issue raised by the criminal case is the questionable assimilation of the CCJW’s shunning policy with a form of discrimination and incitement to hatred.

However, Courts in Belgium had already ruled on similar complaints of alleged discrimination.
On 10 January 2012, the Court of Appeal of Mons rejected J.L.’s discrimination claim.

Last but not least, on 7 February 2019, the Court of Cassation rejected J.L.’s appeal against the judgment of the Court of Appeal of Brussels.

On 16 February 2021, the trial started against the CCJW at the criminal court of Ghent (East Flanders) on the alleged grounds of discrimination and incitement to hatred with a particular focus on their shunning (ostracization) practice in cases of disfellowshipping (excommunication) and disassociation (voluntary resignation).

Four lawyers pleaded for the main plaintiff and over a dozen more former or inactive Jehovah’s Witnesses who had joined him in the proceedings. They took two hours and a half for presenting their arguments and the situation of their clients about their alleged family ostracization. Their plea was supported by the lawyer of UNIA, an inter-federal independent public institution financed by public money that fights discrimination and racism and promotes equal opportunities. Finally, the public prosecutor formally asked that CCJW would be convicted for the alleged crime.

The CCJW was defended by two lawyers, who pleaded for about an hour and a half. They stressed to the judge that the claimants were in fact asking to have the Bible condemned, as it is the basis for the religious beliefs and practices adopted by Jehovah’s Witnesses. This would be the first time since the 16th century that a court in Western Europe would find the Bible criminally guilty, they said.

Half a dozen journalists were present to cover this unusual trial.

Who are the claimants? [⬆︎]

The main plaintiff had not been excluded from Jehovah’s Witnesses but had left of his own will. His wife and their children were not excluded and did not resign, although they too joined the case as claimants.

Only two former Jehovah’s Witnesses had been excluded, one of them becoming a civil party on the very day of the trial.

Six had freely decided to recant their faith.

Five had neither left nor been excluded. They are still considered Jehovah’s Witnesses, though inactive.

The statements of the claimants [⬆︎]

In statements relying more on emotions than on facts, the claimants made various allegations concerning alleged inhuman ostracization actions by their family members who are still Jehovah’s Witnesses.

However, in a number of cases, the claimants’ assertions concerning the alleged moral misbehavior of their family members were contradicted by the latter’s written and signed testimonies. This was for example the case of the brother-in-law of the main claimant.

The claimants also relied on statements of three more persons making various allegations about how their friends and family members who are Jehovah’s Witnesses have allegedly treated them unfairly. However, strange though it may be, these persons too were never excluded or resigned of his/her own will, which made their testimonies rather irrelevant.

The position of the CCJW [⬆︎]

In balance, the CCJW provided the Court with nine statements of individuals who had been excluded and who had since been reinstated as Jehovah’s Witnesses. These testimonies shed quite a different light on the matter. They explain how they had been fairly treated by congregation elders, family, and others in the congregation when they were disfellowshipped.

The cases raised at the Court in Ghent are obviously and exclusively family matters. It would be reductive to restrict the explanation for perturbated family relationships to the official policy of the CCJW. So many different situations may that explain difference of views and values within a family as many of the protagonists have experienced in their own circumstances.

The CCJW considers it is not legally responsible for the intra-familial relations between its members and former members, as it is an individual decision.

All organized religions have exclusion or excommunication procedures in their statutes and Jehovah’s Witnesses are not an exception. Such procedures, rooted in the teachings of the Bible, have been determined by their Governing Body in the United States, the highest theological level of their Church. They are applied in all the countries of the world where they are active, including in Belgium.

In the Belgian case, the decisions of disfellowshipping and of social distancing from excommunicated and disassociated members raised in the court were taken at the level of the local congregations, not by the CCJW.

In their conclusions provided to the Court before the trial, the CCJW says that they do not segregate excluded or resigning members as these can always attend their religious services. They also point out that baptized Jehovah’s Witnesses who no longer actively associate with fellow believers, are not shunned.

Clarifying the relations between Jehovah’s Witnesses and disfellowshipped or disassociated family members, they also say: “In the immediate household, although the ‘religious ties’ the expelled or disassociated person had with his family change, … blood ties remain. The marriage relationship and normal family affections and dealings continue.” In other words, normal family affection and association continues.

The verdict and its consequences [⬆︎]

The court totally disregarded the arguments of the CCJW and on 16 March 2021 condemned the legal entity to the payment of a fine estimated at 96,000 EUR on the grounds of discrimination and incitement to hatred. The CCJW has appealed the court decision.

What the whole case in Ghent is all about is an attempt to oblige the Witnesses to change their Bible-based religious practices. This is a dangerous verdict as it breaches the autonomy of religions as guaranteed by the Belgian Constitution and the European Court of Human Rights.

If this decision happened not to be overturned, its consequences would be incalculable in Belgium and abroad. It would have repercussions on other religious communities where conversion, apostasy, and exclusion are followed by family and social ostracization or worse.

It would also open the door to the prosecution of the Catholic Church in Belgium and any other country as their priests are forbidden from blessing same-sex couples and could be accused of discriminating against homosexuals.