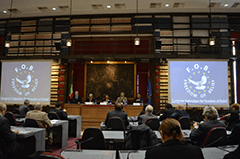 On December 21, 2015, the European Federation for Freedom of Belief held its presentation conference at the Chamber of Deputies.
The event, organized in the prestigious “Hall of Globe” of Montecitorio Palace thanks to Hon. Luciano Ciocchetti, was attended by about seventy people, among whom also representatives of nine religious and spiritual minorities:

Since FOB was born to be of service, promote and defend the person, whose dignity is not tied to the belief or non-belief of belonging, most of the event was devoted to giving a voice to those who not only have a great knowledge of issues related to freedom of belief, but who are also, in their own way, activists concretely engaged in this field. The conference opened with the first session during which the President, professor Nocita and Hon. Ciocchetti introduced the works.

Professor Pietro Nocita underlined the complex relationship existing between religion, law and politics, identifying FOB’s function as one aimed to “educate minds to recognize each religious belief” in peaceful coexistence, refraining from undertaking alternative or repressive measures”. He also pointed out that what seems something new in a given context and that is repugnant to the collective consciousness, can easily be stigmatized as “cult”. In fact, all religions must be respected and each religious organization must comply with the laws of the State.

Hon. Luciano Ciocchetti enhanced the commitment of FOB, especially given the current crisis in which we live and the presence of terrorist phenomena in which religion is mystified in order to commit criminal acts. He added that the activity of FOB is important because it promotes religious culture and aims to thwart regulations and laws that may affect the right to religious freedom. Finally, he expressed the hope that in Italy a legislation will be finally passed on this issue to overcome that on permitted religions of the Fascist era.

The Secretary, Raffaella Di Marzio, outlined the main aspects of the Federation, starting with its characterization as a "project of research-action" and, therefore, association of individuals and organizations federating to achieve the aims and activities in line with the Italian and European societies, more and more multi-cultural and multi-religious. FOB is at the service of the Italian and European institutions as a project that lives and works only thanks to the activity and knowledge of all its components. During the report were highlighted the historical passages that led to the birth of the Federation, established on January 26, 2015. After reviewing the reports of FOB for 2015, first of all that presented at OSCE last September, the proposals for 2016 and  the projects that the Federation intends to carry out in future years were presented, with the support of its members and of all those who want to join this initiative.

Vice President Alessandro Amicarelli framed the action of FOB in the European panorama and in the main purpose of the Association, which is to support the European institutions in implementing the guidelines established by the EU in June 2013 (FORB).

The second session was attended by distinguished speakers, all members of the Scientific Committee of FOB, who indicated other fundamental elements of the purposes and activities of the Federation, each in relation to their field of academic or professional specialization.

Dora Bognandi presented an overview of the difficulties encountered in the past years for the approval of a law on religious freedom, difficulties still persisting.

Luca Bauccio dealt with the theme "The sect that doesn’t exist, between scandal and falsehood: when the judicial trial belies the media trial". He identified in the stigma and prejudice, also spread by the media, the reasons of modern witch hunts whose consequences are often very serious for those who are labeled and discriminated against, as it happened, for example, in the case of Arkeon association.

Prof. Luigi Berzano focused on religious freedom in secular societies and spoke about the risks that this runs in modern societies.

Senator Marco Perduca addressed the topic "The cult of freedom and hence of the law", pointing out the dangers of the proposals of legislative initiatives aimed at the re-introduction of the crime of plagiarism (mental manipulation) in our system, and the ' abnormal presence, in Italy, of a police unit set up specifically to fight "cults" (anti-cult squad).

Finally, Thierry Valle, Camelia Marin and Peter Zoeher presented the situation of freedom of religion and belief in Europe, both as a general matter and specifically in France and Austria.

The third session’s protagonists were three witnesses who shared with the participants their experiences.

In particular, Alessandra Pesce, faithful of the Church of Scientology, recounted her traumatic vicissitudes, dating back to 1988, when she suffered an attempt of deprogramming, which failed. Mauro Bombieri, director of communications of ISKCON, reported recent incidents of violence against the Hare Krishna community in Bangladesh, and finally Giuseppe Pasta, of the Church of Jesus Christ of Latter-day Saints, shared the moment of his conversion from Catholicism to Mormon religion, launching a message of great respect for all faiths.

In conclusion of the event it was underlined how the future projects of FOB unfold in various fields (cultural, educational, legal, political) and how the capability to realize them also depends on the support that members, sympathizers and supporters will want to give to this European Federation, which means, by choice, to remain independent from governments and that, therefore, has no other support than that of those who are part of it and who share its aims or who, while not adhering, however, are willing to support individual initiatives and specific projects.

The conference for the presentation of FOB was undoubtedly a great success, not only for the quality and quantity of participation, but also for the high level of contributions of the speakers and for the impact that the experiences shared by the witnesses had on all people present.  The event established a clearly palpable convergence of ideas, values and shared projects between people of different religious, political and philosophical orientation who, however, have found in the aims of FOB a common denominator, which is that of respect for the human person and the defense of her inalienable rights, including that of freedom of religion and belief.