Shincheonji: Chairman Lee has been arrested 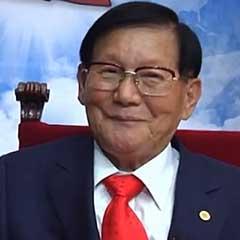 In the night between July 31 and August 1, 2020 (UTC+09:00), Chairman Lee Man Hee, the founder and leader of the South Korean religious movement Shincheonji, has been arrested.

He is accused of having contributed to his movement’s alleged lack of cooperation with the authorities after a member was infected with COVID-19, of having embezzled funds belonging to Shincheonji for building the Palace of Peace, and of having maintained an event in 2019 that the authorities had asked to cancel because of a “typhoon alert.”

The charges are ludicrous. We have demonstrated in our second White Paper that there is no criminal negligence in how Lee and Shincheonji handled the COVID-19 crisis. The Palace of Peace is where three of us met Chairman Lee and is clearly used for Shincheonji events. The “typhoon alert” was a false pretext used by some politicians to prevent a duly authorized event—there was no typhoon.

We protest the arrest of an 89-year-old respected leader on obviously trumped-up charges, and we will promote all the appropriate initiatives to react against a travesty of justice, an attempt to destroy a religious movement, and a serious breach of religious liberty.