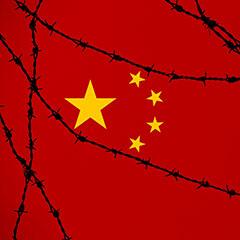 The prominent scholar and expert of religious movements Massimo Introvigne reported in this article the Chinese reactions to the heavy criticisms expressed in the annual report on Human Rights of the US State Department. It is at least paradoxical that the leaders of the Chinese Communist Party reacted by accusing the US of violating human rights. It is not that the United States on the issue of human rights are exempted from criticisms, at least, for example, with regard to the death penalty, which has been definitively abolished only in 19 out of 50 the States but the comparison to China does not hold up.

In the Land of the Dragon human organs are being harvested from those condemned to death. And death penalties are issued with extreme ease and with the most unjust motivations, as in the case of the followers  of the Falun Gong who, for decades, have been arrested, convicted, imprisoned, tortured, killed and their organs harvested for the sole reason of doing a spiritual practice disliked by the regime. The same happens to the Uyghurs Muslims, to the Christian faithfuls of the Church of Almighty God and to many others who "insist" in believing and practicing religions declared Xie Jiao (literally heterodox teachings, meaning doctrines or opinions different from those accepted as true). In practice, another way to define "cults" those beliefs that are not accepted, in this case, by the one-party regime that "recognizes" (in fact manages) only those few religions that subjugated to the dictates issued by the Zhonganhai palace (the Beijing headquarters of Chinese government and the Chinese Communist Party).

China should accept the criticisms of the State Secretary Mike Pompeo with more humility and immediately start a real human rights reform ceasing to persecute its citizens for religious reasons, and not only that. But it will never do it as long as there are States like the European ones which, for mere economic reasons, close their eyes to the atrocities that are committed in that country. For example, Italy and France are getting ready to welcome President Xi Jinping and talk about joining the New Silk Road with the signing of dozens of trade agreements, but no mention to human rights. We will therefore be accomplices of the abuses committed in that country and our wallets will drop blood like their hands. Think about it when you buy some items made in China.

For example, the other aspect that FOB, and so far only FOB, has denounced in the recent article "Hatred and religious intolerance, a sign of the times or desired effects?", is the decades-long connivance of Europe (especially of France) with the endless massacre of the religious people taking place in China.

It was the forerunner of the controversial French “anti-cult” group FECRIS (European Federation of Centers for Research and Information on Cults and Sects) to export to China the "French method" of persecution of the religious movements that was immediately applied to the followers of the Falun Gong. Not many know that almost twenty years ago, in November 2000, under the presidency of Jiang Zemin, the French “anti-cult guru” Alain Vivien, the then president of the deceased MILS (Interministerial Mission for the Fight Against the Sects), went to China with the Neapolitan spouse Patricia Cassano, at the time director of the CCMM (Center Contre le Manipulations Mentale), to attend a meeting in Beijing and discuss about "the problem of cults”. In practice they went to that country as foreign consultants in order to export the “effective” French methodologies for combating the Falun Gong and other religious minorities.

Years ago, our federated CAP LC (Coordination des Associations & Particuliers pour la Liberté de Conscience) denounced – unheeded – the Chinese travels of the Vivien spouses and CCMM itself had described in a bulletin of the time how "France was often quoted [by the Chinese government] as an example, because of the breadth and consistency of the measures adopted to respond to the sectarian threat." In the same bulletin, the association of Vivien family reproduced two pages of the Chinese government propaganda against Falun Gong that was based on their suggestions.

The Vivien’s report on cults that gave rise to an endless series of religious persecutions in France dates back to 1983, when he was a deputy. After the birth of FECRIS in the 90s, it was thanks to Vivien and the funds that his office placed at the disposal of the "anti-cults" (including the association directed by his wife, of which Vivien became president in 1998), that the persecution of the religious minorities spread to other European countries and China. Just as it has been happening in Russia since some years, where FECRIS’ vice president Alexandr Dvorkin is working.

As we wrote in the cited article, in 2017 also the Italian councilor of FECRIS, the psychologist Luigi Corvaglia, president of the association CeSAP (Center for Psychological Abuse Studies) of Bari continued the work of Vivien in China, after taking part in the anti religious activities of Dvorkin in Russia.

It is good to remind that FECRIS and CCMM in France received funds and support from a government body: the MILS, now replaced by the MIVILUDES (Mission Interministerielle de Vigilance et de Lutte Contre les Derives Sectaries), Just like CeSAP and other Italian "anti-cult" associations are recognized and supported by the SAS (Anti-Cult Squad) of the Ministry of the Interior.

For these reasons we believe that the heavy and grounded criticisms of the US State Department should deservedly be extended to France and Italy. This does not relieve China of the responsibilities that it undoubtedly has for the ferocious crimes being committed every day against thousands of faithfuls of religious denominations considered Xie Jiao, but no doubt that the European anti-cult are accomplices to this.