While found not guilty of having obstructed the COVID-19 prevention efforts, Shincheonji’s leader was sentenced (wrongly, in our opinion) for other charges.

Fourth in a series of four articles

by Massimo Introvigne — In late Winter last year, Shincheonji, a religious movement few non-Koreans had ever heard about, became a household name overnight as the ultimate “plague-spreading cult,” after one of its members was identified as an (involuntary) “superspreader” of COVID-19 in South Korea. Shincheonji and its leader, Chairman Lee Man Hee, were accused of having obstructed the anti-COVID-19 effort by not cooperating with the health authorities. Chairman Lee himself was arrested. 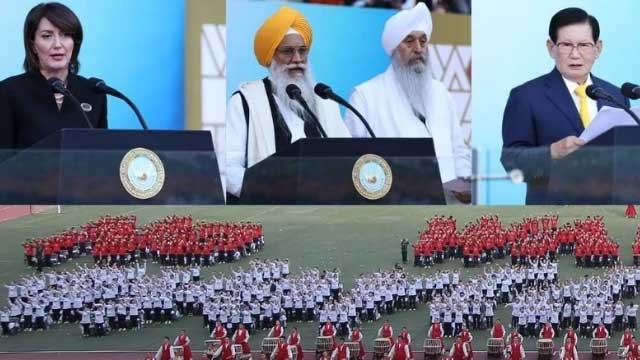 The contested event: Ms. Atifete Jahjaga, Former President of the Republic of Kosovo, Singh Sahib Giani Gurbachan Singh Ji, Chief of the Sikh Golden Temple, and Chairman Lee at the 2017 anniversary of the World Peace Summit.

As discussed in the previous articles of this series, the Suwon District Court on January 13, 2021 concluded that Chairman Lee had not breached any provision of the Infectious Disease Control and Prevention Act (IDCPA), and in fact he and Shincheonji had cooperated “promptly” and “actively” with the health authorities as requested.

While cleared of all COVID-related charges, Chairman Lee was nonetheless sentenced to three years with probation in connection with unlawful activities he had allegedly performed before the COVID-19 pandemic. I discussed in the previous article of the series the charges of “embezzlement of funds,” and am now addressing the accusation that he organized “illegal events.”

Looking at these cases, it seems that Shincheonji was the victim rather than the perpetrator of any wrongdoing. The same scheme repeated itself: Shincheonji or one of its related organizations rented premises for an event; the rental agreement was cancelled due to pressures by the movement’s anti-cult opponents; Shincheonji deemed the cancellation illegal and held the event. The leaders and members of Shincheonji and related organizations did not enter the premises by force. Thousands of persons, including foreign dignitaries, attended the festivals, which took place peacefully and without incidents. Complaints by the rental agencies, which look as having been filed to appease militant opponents of Shincheonji, were dismissed, or withdrawn. However, in 2020, these “dead horses” were revived, and cited as one of the reasons for arresting and prosecuting Chairman Lee.

The “illegal” events mentioned by the prosecution were organized to celebrate the yearly anniversaries of the World Peace Summit, organized by the peace and humanitarian association of which Chairman Lee is founder and chairperson,  HWPL, on September 18, 2014, and were held respectively at the Olympic Park Peace Plaza in Seoul in 2015 (attendance: 57,000), at the stadium at Hwaseong Sports Town in 2017 (50,000), at the Ansan Wa Stadium in 2018 (40,000), and at the Suwon World Cup Stadium in 2019 (60,000). There is no doubt that HWPL has been founded and is led by Chairman Lee, i.e., by the same person who founded and leads Shincheonji. On the other hand, those who have studied HWPL have concluded that its aim is not to convert others to Shincheonji, but to promote world peace, the rule of law, and humanitarian aims. These are rooted in the worldview of Shincheonji, but HWPL events are not used to proselytize on behalf of Shincheonji.

Accusations that Chairman Lee and Shincheonji held “illegal events” were resolved well before 2020. And indeed, in the cases of the Peace Plaza, the Ansan Wa Stadium, and the Suwon World Cup Stadium, the Suwon District Court concluded that “these cases had been already investigated in the past and cleared.” It found Chairman Lee not guilty in connection with these three events.

However, when examining the 2017 case, the court found Chairman Lee guilty of having “known and directed” actions misleading the City of Hwaseong into believing that the organizer of the event was a “volunteer organization,” while it was Shincheonji.

What happened in that case was that, under pressure from the anti-cult group called National Association of the Victims of Shincheonji, the city of Hwaseong tried to cancel the agreement it had signed five days before the event, which the lessees did not accept. In the end, officers of the city of Hwaseong attended the event, were satisfied that the HWPL meeting was not a proselytization rally for Shincheonji, and asked for the payment of the rent (which followed shortly) to close the matter.

Just as in the other cases, the anti-cultists had told the authorities that the stadium will be used for religious ceremonies, which would be against the rental rules. However, the local authorities attended the event and agreed it was not religious.

These were peaceful events with the presence of hundreds of foreign dignitaries, including leading politicians such as the former Presidents of Croatia, Stjepan Mesić, and of Romania, Emil Constantinescu. What emerges from the events was, on the contrary, that the National Association of the Victims of Shincheonji and local fundamentalist Christian churches actively promoted discrimination against Shincheonji, and intimidated local lessors by threatening mass demonstrations. This discrimination was extended to HWPL, by falsely arguing that it was organizing religious proselytization events on behalf of Shincheonji, which was not the case.

In 2020, rather than acknowledging that Shincheonji and HWPL had been at the receiving ends of acts of intolerance and discrimination, the South Korean prosecutors blamed the victims, and filed criminal charges against Chairman Lee for cases where local authorities had already concluded that no crime had been committed.

The case of the Hwaseong Stadium does not appear to be structurally different from the others, for which Chairman Lee was found not guilty. Hopefully, this matter too may be clarified on appeal.