On June 28-30, Alessandro Amicarelli, president of the European Federation for Freedom of Belief, attended at the International Religious Freedom (IRF) Summit 2022 that took place in Washington, D.C. Amicarelli discussed in two breakout sessions about Tai Ji Men. He visited Taiwan before and was invited to teach courses on human rights and religious freedom there. He praised Taiwan’s incorporation of the two international covenants on human rights into Taiwan’s domestic law in 2009. This is a very significant step towards full democracy in Taiwan, he said, adding that the final recommendations of the third review of the two covenants in May of this year failed to mention freedom of religion. He noted that since the Tai Ji Men case is still unresolved, he and other scholars and human rights activists would continue their efforts to urge the Taiwanese government to improve by organizing monthly seminars and publishing articles and books.

Furthermore, on July 1, 2022, Alessandro Amicarelli attended at the seminar organized by CESNUR, the Center for Studies on New Religions, and Human Rights Without Frontiers on “Effective Parliamentarism and the Tai Ji Men Case”, which was held after the United Nations International Day of Parliamentarism, June 30. Speaking at the seminar, Amicarelli distinguished between “parliamentarism” and “effective parliamentarism.” No democracy is perfect, he said, and no parliamentarism is fully effective. Taiwan’s parliamentarism was born comparatively quickly and, while being a significant step towards a full-blown democracy, still does not guarantee the full respect of human rights, as evidenced by the Tai Ji Men case. He also reiterated that the Tai Ji Men case and tax justice problems should have been discussed during the 2022 revision of Taiwan’s compliance with the Two Covenants.

Defending Religious Freedom to Make the World a Better Place

Its first plenary session opened on the morning of June 29 under the theme of “Why IRF Matters in the Modern World.” As Co-Chairs of the Summit, Ambassador Brownback and Dr. Swett welcomed all participants and highlighted the importance of defending religious liberty for all.

“Religious freedom for everyone, everywhere, all the time. That’s what we are about. That’s what we are pursuing.” Ambassador Brownback reiterated the motto of the summit, lamenting, “Unfortunately, that motto is not the reality in the world today. Unfortunately, it’s not even close.” “The most abused human right in the world today is religious persecution,” he added. According to a joint statement issued by Ambassador Brownback and Dr. Swett, nearly 80% of the world’s population lives in countries with significant restrictions on what they can believe and how they can worship. He encouraged everyone to fight for the defenseless, speak for the voiceless, and respect all religions everywhere. “This is the friendship summit,” emphasized Amb. Brownback, urging people to come together across various faiths and traditions and start working together to make the motto a reality.

“IRF (International Religious Freedom) matters in the world also because it is intimately implicated in our own national security, and in the national security and wellbeing of societies around the world. We know that countries that do a good job robustly protecting freedom of religion, conscience, and belief are more peaceful, are more prosperous. They provide more opportunity for their citizens, and they do not threaten other countries. Sadly, the converse is also true.” She stated that nations that persecute people of faith and suppress religious freedom also suppress other fundamental human rights; thus, it is not just about defending those who have been persecuted for their faiths, as important as that is; it is also about defending the pillars of strong, democratic, and free societies. People are experiencing unprecedented material wealth, but they are also experiencing unprecedented hunger, and the only way to satisfy that desire is to seek truth for themselves and live their lives with integrity, according to Dr. Swett.

Other influential leaders, such as Guatemalan President Alejandro Giammattei; U.S. Secretary of State Antony Blinken; and Prof. Mary Ann Glendon, learned hand professor of law, emeritus Harvard Law School, also shared their thoughts about religious liberty. Secretary Blinken also stressed the importance of defending religious freedom, expressed his gratitude for organizations that monitor violations of religious freedom, and invited civil society organizations across faiths and beliefs to continue partnering with the United States and with each other to defend freedom of religion so that all nations and communities will be better off.

During the second plenary session on the theme "Global IRF Snapshot in 2022," more leaders, as well as organizations and individuals suffering from religious persecution, shared their experiences. Nadine Maenza, former chair of the United States Commission on International Religious Freedom (USCIRF), talked about issues of religious freedom in Syria.

Bishop Mansour stated, “The stories that we hear are heart-wrenching, but the courage that we see is beautiful. To believe in religious liberty is to find joy in advocating alongside other religious leaders to promote the primacy of conscience, equal citizenship, and the abiding truth that governments are responsible to people, not the other way around. Governments are not an end in themselves, but a means to an end. And that end is to guarantee all citizens the God-given right to pursue their deepest-held convictions, to practice according to their conscience of faith privately and publicly without fear.”

Among the persecuted organizations is Tai Ji Men Qigong Academy, and its unjust case was discussed in two breakout sessions of the IRF Summit on June 30. The theme of the first one was "The 2022 Review of Taiwan's Implementation of the Two UN Human Rights Covenants and the Tai Ji Men FORB Case.” Internationally renowned scholars and human rights activists, such as London-based Dr. Alessandro Amicarelli, president of European Federation for Freedom of Belief; Dr. Donald Westbrook, a lecturer for the Library & Information Science Department at San Jose State University, USA; Charlotte Lee, an attorney in Taiwan, and others shared their insights on the violations of the ICCPR and ICESCR in the Tai Ji Men case. They also discussed the implications of the case on the international community. 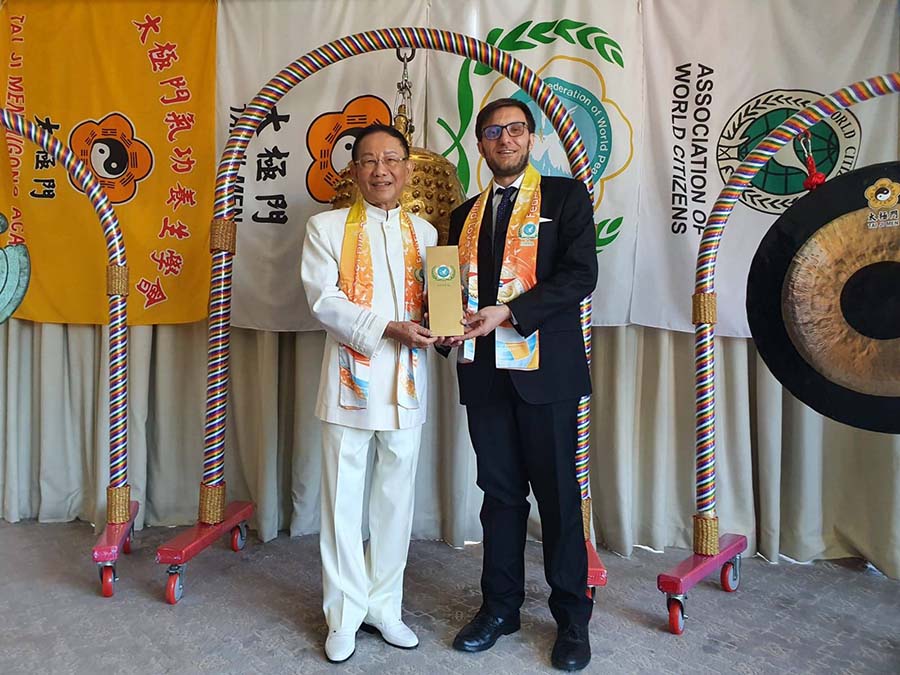 The theme of the second was "Tai Ji Men: International Ambassadors of Peace and Goodwill and Their FORB-Case," which was discussed from different perspectives by Marco Respinti, director in charge of the world famous magazine Bitter Winter; Dr. Holly Folk, professor of humanities and social sciences at Western Washington University, and other human rights activists.

The Tai Ji Men case in Taiwan is actually quite simple. While the prosecutors in the Kaohsiung and Hsinchu had declared that no illegal act was found in the practices of Tai Ji Men and that they had closed the case or were about to close the case after receiving anonymous and ill-founded reports against Tai Ji Men. An unscrupulous prosecutor in Taipei, however, induced a tax collector Shih Yueh-sheng to commit purgy, falsely claiming that Tai Ji Men evaded taxes.

While Taiwan’s Supreme Court in 2007 declared Tai Ji Men not guilty of tax evasion or any other charges, the National Taxation Bureau ignored the Supreme Court’s decision and issued illegal tax bills to Tai Ji Men. In 2020, Tai Ji Men’s sacred land was unlawfully auctioned and then confiscated based on the ill-founded tax bill.

To uncover the lies, reveal the truth, and uphold justice, conscience, religious freedom, and human rights, Tai Ji Men has been courageously fighting against the injustice vested on them for over 25 years and seeking international support to exert pressure on the Taiwanese government to stop using taxation as a weapon against religious and spiritual groups and protect religious freedom–the pillars of a democratic and free society–to realize the motto “religious freedom for everyone, everywhere, all the time” so that all nations and the world will be better off!