France: “All the World Envies Us for the MIVILUDES” The revamped anti-cult mission tries again to export its defamation of Jehovah’s Witnesses and other religious organizations internationally.

by Massimo Introvigne — Considering how the French governmental mission against “cultic deviances” is routinely denounced by leading NGOs specialized in religious liberty and by governments, including the United States’, which publish reports on international freedom of religion or belief, the claim by its former president and member of its new Guidance Council, Georges Fenech, in an interview of May 20, that “all the world envies us [France] for the MIVILUDES” may appear just as an exercise in typical French dark humor.

MIVILUDES, the Inter-ministerial mission for monitoring and combating cultic deviances (dérives sectaires), established in 2002, is the successor of the Inter-ministerial Observatory of Cults (sectes, 1996–98) and the MILS, Inter-ministerial mission for combating cults (sectes, 1998–2002). The French word “secte” serves the same derogatory function of the English word “cult,” and is translated by most scholars as “cult” rather than “sect.” It has been recently revamped and re-financed thanks to the effort of Marlène Schiappa, a politician who has decided to jump on the anti-cult bandwagon for her own reasons. Since July 2020, Schiappa serves as Minister Delegate in charge of Citizenship, attached to the Minister of the Interior, i.e., in the position dealing inter alia with “cults.”

As American scholar Stuart Wright recently wrote, France has an “extraordinary government policy of religious intolerance” against new religious movements: “To say this approach was unique in international policy would be an understatement.” Fenech himself in the same interview called the MIVILUDES “a French exception.”

Yet, for 25 years MIVILUDEs and its predecessors have tried to export the French model of the “war on cults” to other countries—normally without much success, but there are exceptions. 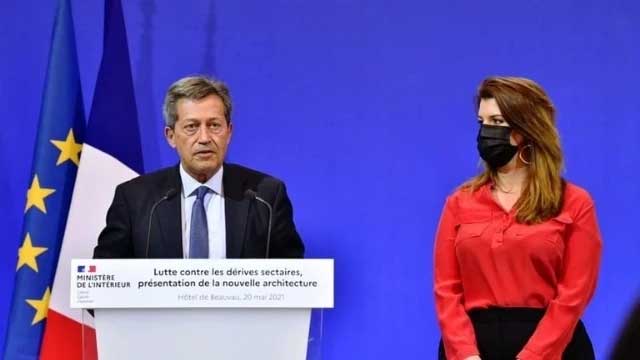 The revamping of MIVILUDES (May 20, 2021): Fenech and Schiappa. From Facebook.

The MIVILUDES itself explains on its website that it is part of its mission to inform other countries, through a cooperation with the French Ministry of Foreign Affairs, of “its activities of monitoring and combating cultic deviances.” But it does more. It believes it should “promote at the European level [and beyond] an attitude of fighting cultic deviances.” The yearly reports of the MIVILUDES detail how MIVILUDES officers travel every year to different countries, participate in international meetings, attend and support anti-cult conferences to promote the “French model,” spread (negative) information about groups targeted as “cults” in France, and react to criticism of the French anti-cult politics by scholars, NGOs, and governments.

What result did these massive efforts achieve? Only rarely does MIVILUDES report about its contacts with Russia and China, two countries where the repression of religious minorities labeled as “cults,” including the Jehovah’s Witnesses in Russia and dozens of groups in China, is carried out through arbitrary detention, torture, and even extra-judicial killings. A cooperation exists, and the main Russian and Chinese anti-cult Web sites regularly advertise the MIVILUDES activities and translate some of its statements, including against the Jehovah’s Witnesses. However, the harsh repression of religious minorities in China and Russia is not a result of French efforts. It existed before the MIVILUDES and is a product of a fight against religious pluralism inherent in the nature of the local regimes. Yet, any support by democratic countries to practices of persecution and repression in Russia and China can only be qualified as shameful.

There was certainly considerable agitation to export the MIVILUDES to Australia, particularly through former anti-cult Senator Nick Xenophon. He called for the establishment of an Australian MIVILUDES to “monitor and control the activities of cults in Australia.” Xenophon was also instrumental in organizing the meeting of Fenech, when he was president of the MIVILUDES, with a senior Australian prosecutor in Canberra. However, Xenophon’s efforts failed. He eventually left politics and decided to work for defending Chinese company Huawei against accusations that it may represent a security risk in Australia because of his ties with the Chinese Communist Party.

MIVILUDES states that France “is unique with Belgium and, to a lesser extent, Germany and Austria, in having adopted a system both legal and administrative of monitoring and combating cultic deviances.” In Germany and Austria, campaigns against “cults” were joined by governmental institutions, but their origins lie in the work of the anti-cult commissioners (Sektenbeauftragten) appointed by the Protestant and Catholic churches. Again, they existed before the MIVILUDES, and the logic is different from France, where the anti-cult campaigns are aimed at protecting the peculiar French notion of secularism (laïcité) rather than the dominant position of the majority churches. This does not prevent MIVILUDES from supplying derogatory information on minority religions to German and Austrian institutions.

Belgium, particularly in its French-speaking part, has old and deep ties with France, and in 1998 it created the CIAOSN, Centre for information and advise on harmful cultic organizations. It is similar to MIVILUDES and its predecessors, although with less powers. CIAOSN does not intervene directly in “combating” “cults,” but forwards its advice and recommendations to other branches of the government.

There is little doubt that CIAOSN is deeply influenced by the MIVILUDES, and Fenech himself boasted about the French institution’s influence in Belgium. A case in point is the 2018 report published by CIAOSN about the Jehovah’s Witnesses’ reaction to cases of sexual abuse among their members. Apart from its factual mistakes on the specific issue of sexual abuse, the report opened with a general criticism of the Jehovah’s Witnesses clearly inspired by MIVILUDES propaganda.

It would be, however, a mistake to assess the international role of MIVILUDES only by examining its direct contacts with foreign institutions. In fact, the MIVILUDES exerts a larger influence through its symbiotic relation with FECRIS, the European Federation of Centres of Research and Information on Cults and Sects, which is an umbrella organization for anti-cult movements in Europe and beyond. The MIVILUDES’s Web site calls FECRIS one of its two “associations-partners.” The other is the Australian Cult Information and Family Support (CISF), which has ties with ex-Senator Xenophon. CISF, discussing Xenophon’s criticism of Jehovah’s Witnesses and others, once reported approvingly about a definition of the Jehovah’s Witnesses as “a cruel religion with no soul.”

In its yearly report for 2008, which focused particularly on its international activities, the MIVILUDES detailed its close and continuous cooperation with FECRIS and FECRIS affiliates in different European countries, while criticizing CESNUR (the parent organization of Bitter Winter), the British INFORM, and centers cooperating with them in other countries for using the expression “new religious movements” rather than “cults” and for studying rather than “combating” them.

In countless events, MIVILUDES and FECRIS have introduced themselves as partners, with a division of labour where MIVILUDES helps FECRIS to receive French taxpayers’ money, and spreads domestically and internationally derogatory material on “cults” prepared by FECRIS. This year, the MIVILUDES announced that it will finance projects against “cults” with the unprecedent sum of one million euros. It is easy to predict that most of this money will go to FECRIS-affiliated organizations. 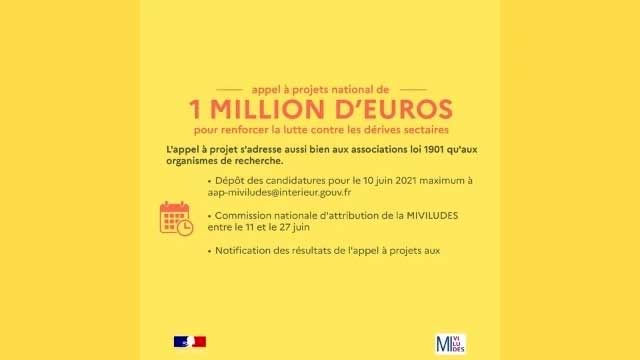 FECRIS has been identified by the U.S. Commission on International Religious Freedom (USCIRF) as a main international threat to religious liberty. It has recently been found guilty of spreading false and libelous information about the Jehovah’s Witnesses by the District Court of Hamburg in Germany. This should have sounded familiar to the MIVILUDES and Fenech, as they have been involved in several similar cases in France. In 2019, Fenech had been found guilty by the Justice Court of Caen, in a civil case, of having violated the presumption of innocence of the Church of Scientology in an interview where he took for granted that the Church was guilty of wrongdoings for which it was being investigated, but nobody had been incriminated.

In Caen, the judges said that Fenech spoke “as former president of the MIVILUDES,” trying to elicit the impression in his audience that, since he had represented the government in this field, what he said was presumably true—which was not the case.

The same dynamic is at work in the international activities of the MIVILUDES exporting its slander against the Jehovah’s Witnesses and other organizations. It tries to elicit the impression that since a government agency diffuses this information (largely coming from FECRIS and its affiliated organizations), then it should be true.

In 2020, USCIRF asked the United States government to “counter propaganda against new religious movements by the European Federation of Research and Information Centers on Sectarianism (FECRIS) at the annual OSCE Human Dimensions Conference with information about the ongoing involvement of individuals and entities within the anti-cult movement in the suppression of religious freedom.”