Religiocide: How to Kill a Religion A new book discusses how religions end. Some are killed—by democratic states.

by Massimo Introvigne — There are countless books on how new religions are born, something that happens almost every week in the world. But how do religions die? A new book The Demise of Religion: How Religions End, Die, or Dissipate (London and New York: Bloomsbury) edited by well-known scholars of new religious movements Michael Stausberg, Stuart A. Wright, and Carole M. Cusack addresses this fascinating question through an introduction and nine chapters presenting case studies.

Being myself a scholar specialized in new religious movements, I find all chapters fascinating. The case studies confirm what previous research amply demonstrated. Religions do not die when their charismatic leaders die, nor when their prophecies fail. As Eileen Barker aptly notes, we do not even need more recent examples, early Christians waited for an imminent end of the world and the glorious return of Jesus, yet Christianity did not disappear when these events failed to materialize. Religions do not die when their leaders are accused of serious crimes and incarcerated or executed: again, this happened to Jesus, and Erica Baffelli shows that Aum Shinrikyo did not really “end” after its founder Asahara Shoko and some of his closest aides were found guilty of horrific crimes and executed (in fact, two branches of the movement are still active in Japan). Religions do not die when they are persecuted in totalitarian countries such as China: as Falun Gong and The Church of Almighty God demonstrate, religious movements are uniquely apt at surviving underground, and escaping from China to freely practice their faith in democratic countries is difficult but not impossible.

Yet, religions die. Some merge with larger organizations, or their members convert en masse to a different faith, some simply succumb in the Darwinian struggle for life among thousands of competing religions. Those who forbid marriage and procreation, such as the Shakers, may become extinguished for demographic reasons. When attacked, some may believe that accommodating their critics and renouncing their most distinctive features would guarantee their survival. Sometimes, the opposite happens, as Eileen Barker discusses through the cases of the Jesus Army and the Children of God, later renamed The Family, both still existing but at serious risk of extinction. Other religious movements may decide to self-annihilate themselves with final homicides and suicides, as it happened in the cases of the Peoples Temple, Heaven’s Gate, the Order of the Solar Temple, and Uganda’s Movement for the Restoration of Ten Commandments of God, four cases (in fact, quite different from each other) discussed by Carole Cusack and Jim Lewis in the final chapter.

Bitter Winter is about religious liberty, though, and the most interesting and alarming way of dying for a religion is what Stausberg calls “religiocide,” i.e., the deliberate annihilation of a religion by state actors through “religious cleansing.” Stausberg mentions some historical cases, such as the Cathars exterminated by Catholic crusaders in the Middle Ages, or the Lakota Sioux’s Ghost Dance movement, destroyed by the U.S. Army through the Wounded Knee massacre of 1890.

In a masterful chapter, Stuart Wright discussed more recent “religiocides” perpetrated by democratic states, i.e., the United States and France. The crime, Wright notes, may only succeed when it targets small groups. He mentions the attempted, but failed, “religiocide” of Scientology in Australia in the 1960s, through laws aimed at putting it out of business in the country. Scientology was large enough to resist, and in a democratic country laws may always be modified or declared unconstitutional.

When “religiocides” succeeded, this happened in two different contexts, Wright argues. France has a unique “war on cults” policy, which is supported by specialized government agencies, police units, and laws. The United States went through a “child abuse [and, more generally, sexual abuse] revolution” from the late 1970s on. It achieved several positive results, but also made it easier for anti-cultists to create “moral panic about ‘threatened children,’” eliciting draconian state responses even in cases where accusations later proved untrue.

Correctly, the case of the Branch Davidians and the 1993 police raid that destroyed them in Waco, Texas (only a handful of members survived and continued the religion for a while) is classified as “religiocide” rather than self-annihilation. A U.S. congressional investigation, whose report was published in 1996 and is quoted by Wright, concluded that, rather than suicides by the Branch Davidians, the 76 casualties were due to the “gross incompetence” of the authorities. Had they not decided to carry out a spectacular raid against a “cult,” they may have arrested David Koresh “outside the Davidian residence,” where he did not remain all the time (until the religious center was put under siege).

Wright also classifies as “religiocides” the demise of the United Nuwaubian Nation, an African American community in Georgia, and the Yearning for Zion Ranch in Eldorado, Texas, a “satellite community” of the Fundamentalist Latter Day Saints, the largest among several groups of schismatic Mormons who insisted on practicing polygamy after the mainline Church of Jesus Christ of Latter-day Saints had renounced it in 1890. The leader of the Nuwaubians was convicted of child molestation (although scholars have doubts on his real guilt), and in Eldorado clearly some had married underage girls. However, as the book demonstrates, crimes committed by the leaders, even if real, normally do not lead to the demise of a religion. In the cases of the Nuwaubians and Eldorado, the groups had been transplanted in conservative southern rural areas respectively from Brooklyn and Arizona, were widely unpopular, and the measures taken by the authorities went beyond the punishment of guilty individuals and indicated the aims of “killing” the religious groups.

France, Wright notes, is a different case, as it has an official policy of “war on sects [cults.]” “To say this approach was unique in international policy, Wright says, would be an understatement.” Groups labeled as sectes are “disenfranchised and barred from participation in customary public activities.” France, Wright notes, even introduced a law criminalizing “mental manipulation (manipulation mentale), a French rendition of the pseudo-scientific, discredited notion of ‘brainwashing.’”

This “extraordinary government policy of religious intolerance” failed to put out of business large groups, which sometimes managed to win in court against the authorities, confirming that in a democratic context “religiocide” only works with small movements.

The story of four of them—the New Age community called Horus, the Center for Teaching Biodynamism, the small prayer group Amour et Misericorde (based, like many others, on Marian apparitions not recognized by the Catholic Church), and the Aumist Religion of the Mandarom (which in fact still exists, but greatly reduced in numbers)—, as reconstructed by Wright, is both sad and paradoxical. These groups were “killed” because they were targeted by what Wright calls “powerful state-sponsored anti-cult organizations” such as UNADFI and others.

Concerning the Mandarom, Wright mentioned that a case that may potentially bankrupt them (another way of perpetrating “religiocide”) was the subject of the movement’s appeal to the French Supreme Court of Cassation. After the book was published, the Cassation ruled against the Mandarom, whose last resort is now the European Court of Human Rights. 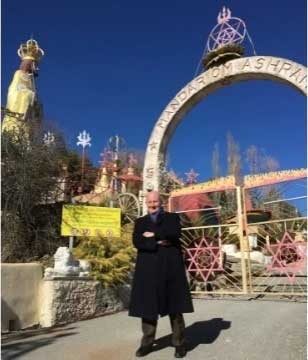 Targeted for “religiocide”: the Mandarom during a 2017 visit by author Massimo Introvigne.

In the case of Biodynamism, it seems that the main complaint of the anti-cult ex-member who denounced the group was that her husband has left her for the movement’s leader, Sophie Berlamont. Eventually, Berlamont won her case at the Supreme Court of Cassation, but in the meantime, she had been arrested and her group effectively destroyed.

In examining how religions die, Wright concludes, “scholars need to be acutely aware of how states play a significant role in determining which religions succeed and which ones fail.” Modern states “have the power to pick winners and losers in the religious marketplace.” This does not only happens in “authoritarian regimes.” “It is imperative to understand how democratic states may become harsh instrument of repression and even unwitting allies of partisan political interest groups seeking to restrict or discredit nontraditional religions.”