International Religious Freedom Summit: Why It Was A Great Success 1,000 religious leaders and activists gathered to continue the work Ambassador Sam Brownback carried out on behalf of religious liberty.

by Massimo Introvigne — Once, there were the Ministerials to Advance Religious Freedom, where the U.S. Department of State invited foreign ministers of dozens of countries to gather and discuss religious liberty. Once, too, there was a U.S. Ambassador-at-large to promote international religious freedom, which during the Trump administration was former governor Sam Brownback.

So far, the Biden administration has not appointed an Ambassador-at-large for religious freedom, nor has it organized additional Ministerials on the subject. But this has not prevented Ambassador Brownback, now as a private activist, to continue his work and gather 1,000 religious and human rights leaders in Washington DC for an International Religious Freedom Summit on July 13-15, 2021.

It was not about political nostalgia for the past administration’s activities but a truly international and bipartisan event. Secretary Blinken also spoke, via video, and announced that an Ambassador-at-large for international religious freedom will soon be appointed again. The Summit’s message was that, while continuing to support the initiatives on behalf of freedom of religion or belief by the Department of State, the civil society can and should take this noble cause in its own hands.

Katrina Lantos Swett, the former chair of the U.S. Commission on International Religious Freedom (USCIRF), co-chaired the event with Brownback. The latter insisted that it is time to go beyond the mere notion of “tolerance,” building relationships of love between different religious traditions. 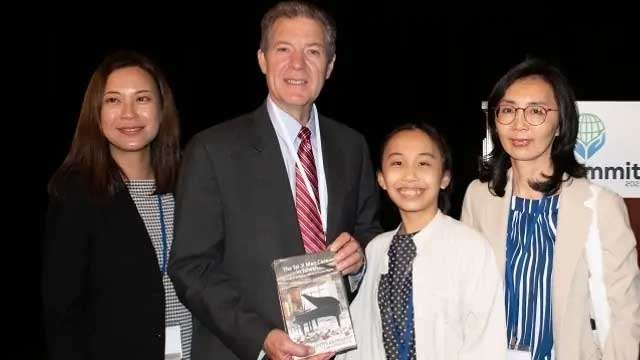 Ambassador Brownback at the Summit, here with dizi (disciples) of Tai Ji Men

In the main sessions and side events, speakers talked about religious persecution around the world, with China as the most blatant case, but less well-known situations were also presented. For instance, one important topic was the fate of Christians in Iraq. Statistics are a matter of controversy, but they may have been reduced to 400,000 compared to one million and a half only twenty years ago. Christians, as well as Yazidis, have greatly suffered from ISIS persecutions, but a multiplicity of factors explain their difficult predicament.

One significant participant was Metropolitan Hilarion of Volokolamsk, chairman of the Moscow Patriarchate’s Department for External Church Relations. Russia has been critical of American efforts in defense of religious liberty, because they criticized Russian persecution of Jehovah’s Witnesses and other minorities, emphasizing the support given to discrimination of minorities by the Russian Orthodox Church. Brownback saw Hilarion’s participation as a welcome initial step towards a dialogue about the situation in Russia and the role of the Orthodox Church, in addition to the already existing cooperation in defense of Middle Eastern Christians.

Roman Catholic Cardinal Timothy Dolan of New York, who chairs the U.S. Bishops Conference Committee for Religious Liberty, spoke at the official dinner about problems of religious liberty that exists also in the West. “Our enemies— and their name is legion, he said—dismiss us as self-protecting, self-serving fanatics who simply want to protect our narrow privileges and rights while suffocating enlightened progress.” In fact, the Cardinal noted, it is impossible to credibly advance religious liberty claims internationally if it is not fully protected at home.

Brownback vowed to maintain religious liberty as a truly bipartisan issue and a cornerstone of U.S. foreign policy.

Bitter Winter was a partner in the Summit, and also participated in a side event about the Tai Ji Men case in Taiwan.

Brownback also unveiled plans to hold another International Religious Freedom Summit in the U.S., preceded by regional summits in the Middle East and Asia.