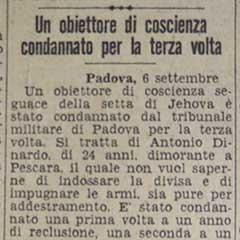 Holocaust victims, derided, discriminated against, subject to virulent attacks by anti-cult organizations and fake news fabricated ad hoc, Jehovah's Witnesses have always been an example of integrity and altruism that materialized with epochal human rights achievements. This was the case for the freedom of therapeutic choice and for the right to conscientious objection, now recognized as an inalienable right.

A survey promoted by the national headquarters of the Christian Congregation of Jehovah has brought to light the heroic efforts sustained by young Witnesses during the period spanning from 1960 to 1990. We publish below an article of Nonviolent Action of 29 May 2020 with the comments of jurists, academics and writers, some of whom were at the forefront of that great battle.

For our part, a heartfelt thanks goes to the courage, perseverance and foresight of Jehovah's Witnesses who, even today and in too many parts of the globe, are subjected to prison because of their ideas and their religious faith.

10,000 years in prison (but they may be many more): the impressive contribution of Jehovah's Witnesses to the recognition of the Right to Conscientious Objection in Italy 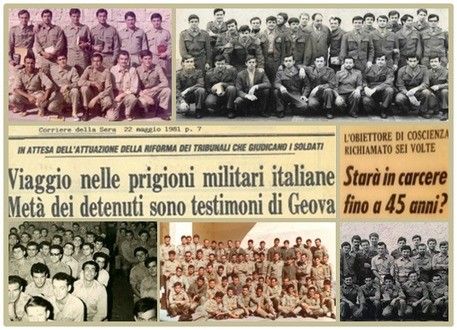 More than fifty years, half a century have passed since the first struggles of conscientious objectors to gain recognition. Then they were considered cowards, traitors, enemies of the state, deserters, unsociable, ambushes, dangerous subversives to put in prison. Instead, they were the few citizens obedient to the Constitution: they really repudiated the war.

They asked for a law that would legalize the objection to military service and establish an alternative civil service, because the defense of the homeland could be done even without weapons, with nonviolence.

Thousands of boys from the 60s, 70s and 80s of the last century have spent part of their youth in military galleys to assert a right, which was also a duty of conscience.

Among them many Jehovah's Witnesses.

They are those who in terms of numbers and years of punishment have paid the most.

Today, that military service has been suspended, and civil service is a mass phenomenon, involving foreign boys and girls and young people, we must really thank and be grateful to those young people who have been protagonists of a long silent but winning struggle .

10,000 years in prison (but they may be many more): the impressive contribution of Jehovah's Witnesses to the recognition of the Right to Conscientious Objection in Italy

A survey conducted by the religious denomination reveals the huge price paid by thousands of Jehovah’s Witnesses in Italy, especially in the decades 1960-1990, for refusing to take up arms.

Today, international law recognizes conscientious objection to military service as a fundamental human right, but it has not always been so. In many countries, including Italy, recognition of such a right was a civil achievement paid for at great cost. “If we obtained recognition of conscientious objection in Italy,” wrote Waldensian pastor Alberto Taccia, “we owe it largely to young Jehovah’s Witnesses who endured months-long imprisonment in military prisons, only to be dismissed thereafter with a humiliating diagnosis of religious delusion or psychophysical inability.”[1]

Jehovah’s Witnesses have always viewed military service as incompatible with Jesus’ love-based ethics and with the command to love one’s enemies. How many Jehovah’s Witnesses in Italy paid for their conscientious objection by being sent to jail in the last one hundred years? And how many years did they spend in jail? Since it is not possible to give a precise answer to these questions by simply referring to court papers, the central office of the confessional body decided to conduct a survey by asking those Witnesses who are still alive. The results provide an estimate (albeit with rounded-down figures) of the huge impact that the stand of young Jehovah’s Witnesses who were conscientious objectors, especially in the post-World War II era, had on Italian society. It was found that among Italian Jehovah’s Witnesses who are still alive, at least 14,180 served a prison term for refusing to render military service. To a large extent, this took place between the late 1960’s and the late 1990’s. All told, survey respondents spent 9,732 years in prison.

Jehovah’s Witnesses made up “the vast majority of youths who were imprisoned for refusing to render military service,” observed historian Sergio Albesano. “By their massively sharing in the refusal of joining the military ranks, they actually originated a political case and helped bring the problem to the attention of public opinion.”[2] The stand of Witnesses who were conscientious objectors also impressed former Prime Minister Giulio Andreotti, who wrote in 1983: “In the 1960’s, when I was Minister for Defense, I wanted to comprehend the reasons behind the ever-increasing cases of objection to military service on the part of youths who were members of Jehovah’s Witnesses […]. Talking with one of them in the Forte Boccea prison, I was impressed by the evident religious inspiration and non-involvement in any political speculation; it was not by chance that they subjected themselves to years-long prison terms, as they persevered in refusing to wear a uniform (there was no law for objectors yet, a law whose development they contributed to furthering).”[3]

As testified by parliamentary reports, thanks to those objectors’ contribution, after many years of debate and postponement the authorities were moved to approve a law that finally granted conscientious objection a full legal recognition: Law No. 230 of July 7, 1998. Involuntary drafting was later suspended in 2005.

“What stands out as evident is the connection between conscientious objection legislation and the evolution of Italian democratic society as a community of free persons,” stated Professor Sergio Lariccia. “Today, conscientious objection is included among the inalienable human rights, and even though its cultural origins are also rooted in religious matters, this conquest has benefited everyone. We owe a debt of gratitude to those who contributed with their own lives to guarantee our freedoms as well.”

Here are comments from some among the most important historians and experts in the field of conscientious objection (in strict alphabetical order) on the contribution of Jehovah’s Witnesses to the recognition of this fundamental right. The full version of the comments is  available in the online journal Azione Nonviolenta [Non-Violent Action].

(comments collected in April and May 2020)

(Historian of Anti-Militarism, author of the book "Storia dell'obiezione di coscienza in Italia" [History of Conscientious Objection in Italy][4]):

“The impressive figures of this survey—which are, besides, certainly reductive as respects the real situation, because many objectors died since then, and therefore they could not respond—bring honor to Jehovah’s Witnesses, who by reason of their religious creed steadfastly endured such an adverse situation as imprisonment, not because they had committed anti-social acts, such as stealing and killing, but actually for refusing to learn to kill. […] It is about time they were granted our full respect.”

(Lawyer and Full Professor at the Department of Law of the University of Pisa, Chairman of Associazione dei docenti universitari della disciplina giuridica del fenomeno religioso [Association of the Professors of the Law Discipline of the Religious Phenomenon], ADEC, member of Centro Interdisciplinare Scienze per la Pace [Sciences for Peace Interdisciplinary Center], CISP):

“I believe that the testimony of the faith of Jehovah’s Witnesses has always been neglected: Nazi discrimination against them is not widely known, as are not widely known the discriminations they suffer nowadays. The collection of faith testimonies that you carried out is a point of strength for all of us, who at such a difficult time are coming to terms with the important role played by spiritual strength and faith’s consistency in daily life.”

“At a time when military chaplains defined objection as ‘an insult against one’s motherland, having nothing to do with the Christian commandment to love, and an expression of cowardice,’ the firm stand of many Jehovah’s Witnesses contributed to the evolution of law and society in Italy. […] Today, conscientious objection is included among the inalienable human rights, and even though its cultural origins are also rooted in religious matters, this conquest has benefited everyone. We owe a debt of gratitude to those who contributed with their own lives to guarantee our freedoms as well.”

(Full Professor of Church and Canon Law at the “Magna Graecia” University of Catanzaro, Secretary of Associazione dei docenti universitari della disciplina giuridica del fenomeno religioso [Association of the Professors of the Law Discipline of the Religious Phenomenon], ADEC):

“The history of conscientious objection to military service—certainly for what concerns Italy, but also within the general frame currently offered by communitarian and international law—can by no means overlook the personal battles which took a great toll on those who, by adhering to the creed of Jehovah’s Witnesses, proved to be martyrs, namely, witnesses of this achievement of freedom. […] The total conscientious objection displayed by Jehovah’s Witnesses stands as a milestone on the path to the recognition of a universal right to object, but it is a sign of consistent faithfulness to one’s religious convictions, for which they paid a high price, for which we are grateful to them, and which we consider with respect and with a spirit of cooperation.”

(Lawyer and journalist, founder of “L'Incontro", a journal committed to the defense of civil rights. Among the others, he also defended Pietro Pinna):

“Almost all those I assisted (except for some radical objectors, free thinkers, anarchist, and, latterly, some Catholics) were Jehovah’s Witnesses whom I admired […] for their absolute respect of peace-oriented ideals, for their lofty moral sense. […] Ultimately, by my work in behalf of young Jehovah’s Witnesses even before the Supreme Military Court, the Court of Cassation, and Parliament (through fellows of the Italian Socialist Party), I gained sincere friendships, devoted acknowledgements, historical memories. One of my books, entitled “Non mi sono mai arreso” [I Never Gave Up], testifies how persistently I for many years pursued the goal shared with my unforgettable Jehovah’s Witness youths.”

“I have always looked with admiration and gratitude on the testimonies and on the ideal and religious principles offered us by pioneers of conscientious objection in our country, and Jehovah’s Witnesses doubtless make up the quantitatively most relevant part of that number. Their moral strength in asserting a principle and their mildness in accepting the penalty are an example that speaks for itself.”

(Magistrate from 1950 to 1993, former Professor of Law and Military Penal Procedure at the University of Turin, author of the book “L’Obiezione di coscienza al servizio militare” [Conscientious Objection to the Military Service][6]): “

In post-World War II Italy, the most numerous group of objectors was made up of members of Jehovah’s Witnesses. […] The Constitutional regulations that specifically concern the defense of Motherland and military service (Art. 52…) seem to be perfectly compatible with the recognition of conscientious objection, since an objector is not a coward who avoids fulfilling his social-solidarity obligations, but a citizen who sincerely refuses the use of weapons or, at any rate, to be part of an army, and who is loyally willing to take up other tasks, perhaps even more demanding ones, to the benefit of the community.”