A paper presented at an international conference held in Warsaw in January has now been published.

by Michele Amicarelli — On January 21–22, 2021, the Maria Grzegorzewska University of Warsaw, Poland, with the patronage of UNESCO, organized an international conference on “Education and the Challenges of the Multicultural World.” Due to the COVID-19 restrictions, the conference was held online. Some of the papers presented have been published in the International Journal of Pedagogy, Innovation and New Technologies. One of these papers is an interesting contribution to the growing literature on Tai Ji Men and their corresponding freedom of religion or belief case in Taiwan. The author is Susan Wang-Selfridge, who holds a Ph. D. in Music from the University of California, Los Angeles (UCLA) and has extensive teaching experience in the musical field, including at the same UCLA.

The paper starts by noting that, “Music is the essence of culture, the first music every child hears is the mother’s heartbeat. The rhythmic beat is full of love and security, creating an association that lasts a lifetime.” Culture, as the ancient Greek philosophers Pythagoras, Plato, and Aristotle taught, is transmitted from generation to generation through education, and supplies the building blocks for advanced civilizations.

“Pythagoras, Wang-Selfridge writes, believed that music was inseparable from numbers and considered music to be the key to both the spiritual and physical universe. He viewed music as a system of pitch and rhythm ruled by the same mathematical laws that operate the entire visible and invisible world.” This means that music is not only a pleasure, but can shape our moral character and behavior. Plato added that music has also a political function, as it can help building an ideal State. Therefore, Plato “promoted the usage of music modes of Dorian and Phrygian as they fostered the virtues of temperance and courage and limited modes of Mixolydian, Lydian, and Ionian, as they were considered to be ‘soft and convivial’ in character.” Aristotle agreed with Plato that music and physical education were essential to educating youth to become good citizens of a virtuous state.

Wang-Selfridge notes that, even before the Greek philosophers, Chinese sages of the Zhou Dynasty (which started in 1046 BCE) proposed a system based on both Li (virtuous conduct supported by rituals) and Yue (music). Li and Yue together would promote harmony and peace, and “the Chinese characters for harmony and peace first appeared in Li and Yue documents.”

Closer to us, German intellectuals such as sociologist Max Weber and philosopher Max Scheler considered culture as the rhythm of history, to be faithfully transmitted through principled education. And many sages, the author notes, from ancient Greek dramatist Sophocles to Martin Luther King, Jr,, identified conscience as the core of education of culture. Through conscience, we constantly re-examine the culture that has been transmitted to us, and become able to distinguish between its positive and negative features.

These, Wang-Selfridge notes, may appear as abstract ideas, while in practice students from poor families have little chance to appropriate culture, including music. Her experience, however, taught Wang-Selfridge that “music is often a path for talented musicians to escape impoverished backgrounds,” although musical illiteracy makes progress more difficult. Jimi Hendrix, for example, was never able to read or write music, and learned each song by ear. He succeeded, but only after a long struggle. Music, the author argues, should be taken more seriously as part of an integral, humanistic education, and more should be invested in educating to the arts. On the other hand, it is a mistake to regard musical education as merely technical. As Confucius said, educating to music cannot be separated from educating to a virtuous and happy life.

Government policies can impact on culture and education for better or worse. Here the author introduces Tai Ji Men as a case study. Tai Ji Men and its master, Dr. Hong Tao-Tze, propose an education to culture both of their dizi (disciples) and of a wider public through performances that include music. These activities have been highly praised by the highest political authorities of Taiwan, including several Presidents, and of other countries.

Yet, Wang-Selfridge notes, despite all this praise Tai Ji Men and Dr. Hong have been entangled in a 25-year-long judicial persecution. It started with a politically motivated crackdown on several spiritual and self-cultivation movements in 1996, which also involved Tai Ji Men. Despite the fact that the Supreme Court has declared Tai Ji Men not-guilty of tax evasion or any other charges, the NTB continues to impose taxes until the authorities agreed to withdraw all tax bills except one, for the year 1992. This did not make sense, as nothing different happened in 1992 with respect to the other years, but was based on a technicality and generated massive protests by Tai Ji Men dizi, which continue to this day.

These protests are a fruit and an expression of the education Tai Ji Men have received, and of the culture they learned and propagate, which is based on the notion of conscience. Wang-Selfridge notes that conscience is more than mere consciousness. Conscience is “self-awareness which is capable of introspection.” The injustice vested on Tai Ji Men derived from a lack of conscience in some sector of political life and bureaucracy. Tai Ji Men’s answer was, in turn, based on conscience. In the struggle of many who took to the street, the education they had received, which included arts and music, shone. 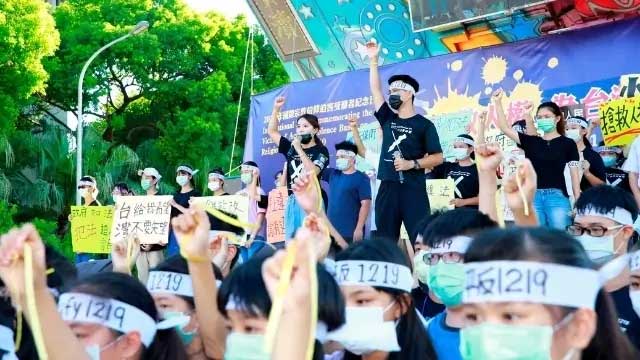 Wang-Selfridge’s article is a welcome addition to what has already been published on Tai Ji Men, from an original perspective rooted in a unique academic and personal experience in the field of music. It deserves to be read by those interested in human rights, conscience, education, and the Tai Ji Men case.

This article was published also on Bitter Wintrer