New Religious Movements, COVID-19, and Media: The Case of Scientology A Webinar organized by the Lithuanian Society for the Study of Religions discusses the book by Rosita Šorytė on how Scientologists confronted the pandemic.

by Alessandro Amicarelli — “We put a lot of enthusiasm in our work as volunteers. If we said we were Scientologists, we were accused of proselytizing for our church. If we didn’t say it, we were accused of hiding our identity for some sinister purpose.” This was Luigi, an Italian Scientologist, raising his hand and offering a comment during the Webinar organized on January 5 by the Lithuanian Society for the Study of Religions on “New Religious Movements in the time of COVID-19: Actions, Counteractions, and Consequences.” The Webinar’s opportunity was the launch of the book by Rosita Šorytė “‘We Can Lift This World While Quarantined’: Scientology and the 2020 Pandemic” (Madrid: FORB Press, 2020). The video of the Webinar can be freely accessed online.

Mentioning her long professional experience in the field of humanitarian aid, Šorytė, who also serves in the Scientific Committee of the European Federation for Freedom of Belief (FOB),ù stated that she found it laughable that Scientologists were criticized for mentioning the name of their Church in the valuable brochures about confronting COVID-19 they distributed throughout the world, while states such as Russia and China put their flags and names on any truck delivering humanitarian help, and made sure they were filmed and photographed. “It is a double standard,” she said, reminiscing on how countries always rejected proposals to provide help anonymously under the sole flag of the United Nations.

Double standards and the attitude of the media were very much at the center of the Webinar, moderated by Rasa Pranskevičiūtė-Amolson of Vilnius University, and Eglė Aleknaitė of Kaunas’ Vytautas Magnus University. “Misunderstandings and disinformation about new religious movements, and minority religions in general, existed long before COVID-19, Šorytė said. They are demonized as ‘cults,’ but a typical answer when I ask somebody’s opinion about Scientology is that they know it is ‘bad,’ but when asked how they know it, they would refer to something they heard from the media. The point is, first, many simply do not know anything about minority religions such as Scientology, and second, there is an organized anticult movement actively spreading negative information about them.”

Mentioning the well-known case of Shincheonji in South Korea, she noted how the movement was scapegoated after many members were infected by participating in gatherings that were not yet forbidden in the country, but received much less publicity when thousands of its devotees who had recovered from the infection voluntarily donated plasma.

Commenting on the book, Massimo Introvigne, managing director of CESNUR, the Center for Studies on New Religions and editor-in-chief of Bitter Winter, noted that, although written by an author whose field of experience is humanitarian aid and international organizations politics rather than sociology, the text revolves around a sociological concept, gatekeeping. “Media, Introvigne said, are reached every day by millions of news. They decide what to publish and what to ignore, which is normal. What is less normal is that, on certain subjects, most of them have preconceived notions and stereotypes, and would only open their gates to let pass what confirms the stereotype, while rejecting what would deny it. The book nicely shows how, because of their stereotype that Scientology is ‘bad,’ several media accepted and published news that Scientologists were not practicing social distancing, or were spreading wild conspiracy theories about COVID-19, even if this information happened to be false. At the same time, they did not publish the news about the massive and effective work done by Scientology volunteers in helping during the COVID-19 crisis, even if this information was both true and relevant.” 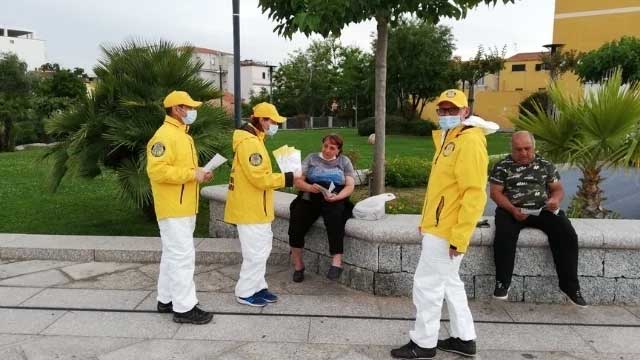 During the discussion, which involved scholars from various countries, including Bernadette Rigal-Cellard, the author of a detailed study of Scientology activities in the Greater Los Angeles area, several participants mentioned that, in addition to common-sense advice on masks, disinfectants, and hygiene, Scientology also offered not less important suggestions on how to confront desperation, and fear often associated with the pandemic and the quarantine. They are based on the booklet “Solutions for a Dangerous Environment,” published by Scientology putting together texts of its founder, L. Ron Hubbard.

“Religions, Introvigne said, during a crisis such as COVID-19 should do more than offering practical advice. It is expected that they propose a narrative on how to cope with the crisis—psychologically, morally, spiritually, not just physically. This is what Scientology did by spreading the booklet on ‘dangerous environments.’”

The title of Šorytė’s book comes from a verse of the song “Spread a Smile, Stay Well,” which in turn was also the name of a concert organized by Scientology earlier during the pandemic, whose video on YouTube exceeded 10 million views.

Šorytė writes that “Spread a Smile, Stay Well” “at first sight, may appear just as a sugary text, whose main aim is to allow a group of well-known performers to demonstrate their technical prowess. In fact, the text spells out Scientology’s ambitions during the pandemic and beyond. Its first commandment is to ‘spread a smile, not something else’ (i.e., not contagion and the virus), but the context is ‘starting a new direction,’ ‘affecting the future ahead,’ and even ‘lifting the world’ and ‘showing this world it can be restored.’” All these are quotes from the song and, “smiles,” Šorytė concludes, referring to Scientology’s notion of the thetan as the divine essence of humans, “as evidence that the crisis has been handled and thus ceased to be chaotic, become powerful tools to create a new world, one not dominated by fear but created by the collective effervescence of thetans progressively moving, including through beauty and art, from wrongly perceiving themselves as effect to the truth that they are cause. Scientologists sincerely believe they are equipped with the only technology in the world capable of achieving this goal.”

Obviously, non-Scientologists cannot be expected to share this belief, but when the purposes and actions of Scientologists and members of other new religious movements are systematically misrepresented by some media, then a serious problem for religious liberty is created.