Sajjad Masih Gill was serving a life sentence from 2013 for allegedly offensive SMS. On appeal, judges said this was not enough.

by Massimo Introvigne — Is life imprisonment an adequate punishment in Pakistan for sending an SMS critical of Prophet Muhammad? No, said last week the Lahore High Court: only the death sentence would do.

Sajjad Masih Gill is a 35-year Seventh-day Adventist from the district of Pakpatan, in the province of Punjab. In 2011, he was accused of having sent blasphemous SMS defaming Prophet Muhammad and arrested. The police did not find any evidence in his cell phone that the SMS had in fact been sent, but said it had been able to trace the messages back to his phone number through a cellphone tower. He and his lawyers maintained he had simply been framed as part of a crackdown on the Adventist community.

On  July 13, 2013, the court of Gojra, Punjab, sentenced him to life imprisonment. His appeal got international support, including by the American Jewish Committee, but was repeatedly delayed and moved from one court to another.

The case went on in a climate of violence. On October 22, 2015, Sajjad’s brother, Sarfraz Masih Gill, and nephew, Ramiz Gill, were attacked when they were returning home after visiting Sajjad in jail. They had to live in hiding ever since. On January 29, 2016, two lawyers from Sajjad’s defense team were stopped by armed men and threatened on the road from Kasur to Lahore.

Last week, the appeal (or, rather, revision) verdict was finally pronounced, with the judges accepting the prosecutors’ argument that the only possible penalty for blasphemy is death. The lawyer who led the final argument for the prosecution, Zeeshan Ahmed Awan, celebrated the success by posting on Facebook that “Honorable Lahore High Court accepts our prosecution argument that ‘Capital Sentence is the only possible Sentence in Blasphemy and Imprisonment for Life though provided in 295 C PPC, awarded by Trial Court is illegal being repugnant to injunctions of Islam’!” 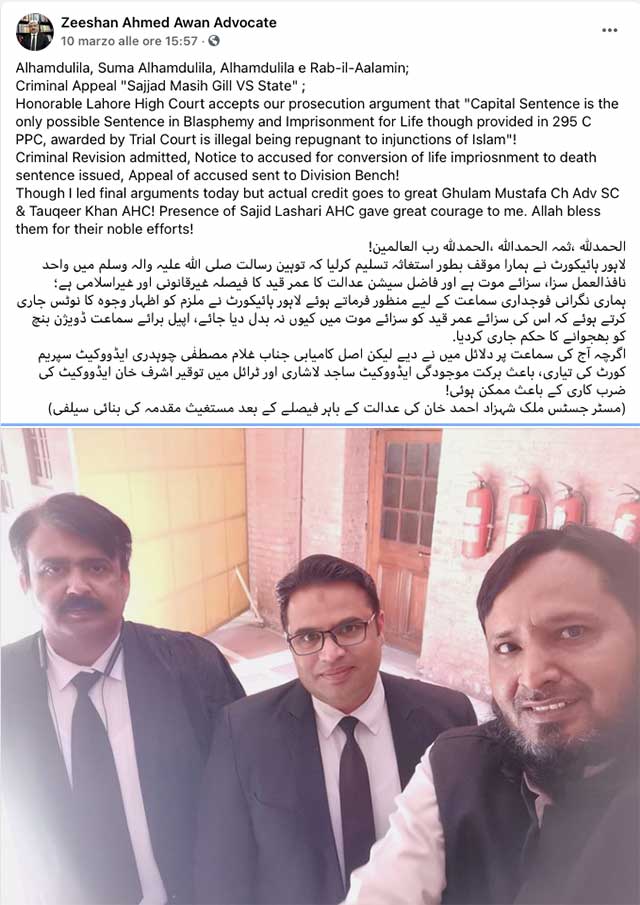 Sajjad’s legal team announced its intention to continue the legal fight, in what is another sad chapter in the enforcement of Pakistani law on blasphemy.