Persecuting the Church of Almighty God as “Xie jiao” in China 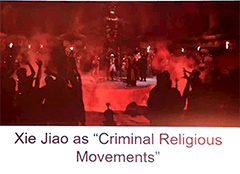 Professor Massimo Introvigne attended in the last few days a conference at the University of Hong Kong, where he spoke on the Chinese notion of xie jiao. The aim of the conference was a dialogue between the Chinese Anti-xie-jiao Association, which is connected with the Chinese Communist Party, Chinese authorities and scholars, and Western scholars, on xie jiao an on one particular movement China regards as xie jiao, the Church of Almighty God.

Professor Introvigne, what exactly is a xie jiao. Can’t we simply translate the Chinese expression with “cult”

But that was precisely the long and the short of the Hong Kong conference! Xie jiao is an expression used since the times of the Ming Dynasty, well before the current controversies on “cults.” The pendulum switched repeatedly from using it with a theological meaning, for “heterodox beliefs,” or with a police one, “criminal religious movements,” or “religious movements conspiring to overthrow the government.” Today China has adopted a list of xie jiao, whose members may go to jail, or worse, but my impression is that within the administration and the Chinese Communist Party (CCP) there are three different schools or thought. The first uses xie jiao in the traditional Chinese pre-Communist sense, asking the government to protect the “orthodox” beliefs and persecute the “heterodox” ones. A Chinese scholar even seriously argued that a movement claiming to be Christian but denying the Trinity should be regarded as xie jiao – and he meant regarded by the police and the courts, which is somewhat paradoxical in an officially irreligious state. The second school is influenced by the Western anti-cult movement and is in touch with the anti-cult Federation FECRIS, which, particularly through its Russian branch, is in turn eager to gain some recognition in China. This school is happy to translate xie jiao as “cult” and to apply to the xie jiao the definitions of the anti-cultists, based on brainwashing. Here lies another paradox, because the idea of brainwashing was invented by American intelligence agents during the Cold War as a form of anti-Chinese propaganda. Brainwashing was something the evil Chinese Communists did. Of course, today in China few are aware of this origin of the word “brainwashing”—we tried to remind them of it. There is also a third school, which would accept to define xie jiao in behavioral terms, as groups that commit serious common crimes. It is the only school we can have a dialogue with. It surely does have adherents within the police, but we don’t know how seriously this position is taken by the higher spheres of CCP in Beijing. Also, even those who adopt this more acceptable definition of xie jiao include within the serious crimes making a group a xie jiao the fact of opposing the CCP, which shows how different are the legal categories in China with respect to the West.

The conference focused on a specific group in the list of xie jiao, the Church of Almighty God, also known as Eastern Lightning, which seems now to rank second after Falun Gong, if not first, in the list of groups regarded as very dangerous by the CCP. This group is now also present in Italy. Can you introduce it?

The Church of Almighty God is a new religious movement, born in China in 1991. Its core teaching is that Jesus Christ returned to earth as the incarnated Almighty God. Although the movement never mentions her name nor any bibliographic details, and cautions that any information supplied by outside sources may be wrong, most scholars believe it identifies the incarnated Almighty God with a Chinese woman, Yang Xiangbin (b. 1973), who was born in northwestern China. In 1989, during the revival of the Chinese churches, the Almighty God gave up his studies and formally entered the house church movement, and began to utter prophetic words while attending meetings of the movement founded by Witness Lee (1905-1977), known as the Local Church in the West and as Shouters in China. Many believers in the Chinese House Church movement (i.e among the branch of Protestant Christianity not recognized by the Chinese government) believed that those words were from the Holy Spirit and started to read them in their gatherings. Only in 1993, however, the person who was the source of these messages was recognized as Christ, the incarnate God, and the only one true God. Among those converted to the message and the person of the Almighty God was Zhao Weishan (b. 1951, native of Heilongjiang Province, China), who was at that time a leader in a branch of the Shouters movement. He was later recognized as the “Man Used by the Holy Spirit,” and the “Priest,” of the Church of Almighty God. The Church of Almighty God is personally led and shepherded by the person it recognizes as the Almighty God, while Zhao Weishan is cooperating with the work of Almighty God, and is in charge of the administrative affairs of the Church.
Since the year 2000, both Zhao and Yang live in the U.S. There are no reliable statistics but most scholars agree the followers are hundreds of thousands, if not more than one million, not only in China, but in South Korea, U.S., Canada, Italy, and other countries.

The movement claims that thousands have been arrested, “re-educated” in labor camps, and some have “mysteriously” died in custody. We know you also heard the explanations of the Chinese authorities. How do they defend themselves?

Obviously, the authorities do not admit having killed anybody in their jails. But they do admit the arrests and the re-education procedures. They claim all this is needed because the Church of Almighty God, under the cover of religion, is a typical xie jiao conspiring against the government and is guilty of very serious crimes, from homicide to beating and kidnapping leaders of other Christian churches.

Do you believe these accusations?

I want to discuss methodology first. Each claim should be examined separately, and all the available documents collected and studied. I insisted with the Chinese authorities that all the documents they have about these incidents should be made available to independent scholars. Certainly, there is no shortage of texts produced by some leaders of other Chinese Christian churches, who hate the Church of Almighty God because it converted many from their flocks. And I also interviewed, as did several colleagues, leaders and members of the Church of Almighty God who now live in South Korea or the United States. I started from the most infamous episode, the 2014 homicide in a McDonald’s diner in Zhaoyuan, on which I believe I am ready to share some conclusions.

What happened in 2014 in Zhaoyuan?

On May 28, 2014, a group of missionaries claiming to represent "Almighty God" entered a McDonald’s diner in Zhaoyuan, Shandong and started preaching, asking customers for their phone numbers in order to contact them again in the future. One client, Wu Shuoyan (1977–2014), refused to supply her phone number. One of them, Zhang Lidong (1959–2015), beat her to death. Chinese authorities and media claimed that the Church of Almighty God was responsible for the murder. However, on the basis of research by Emily Dunn, the author of the only academic book on the movement published so far, and others, it appears that the Church of Almighty God was not responsible for the murder. At the trial following the events in Zhaoyuan, Zhang Lidong and other members of the group explicitly declared that they were not members of the Church of Almighty God led by Zhao Weishan. They regarded as “Almighty God” two persons, Zhang Lidong's daughter, Zhang Fan (1984–2015), and her friend Lü Yingchun. The latter is at the origin of the group that committed the 2014 crime, which can be described as a syncretism with beliefs taken from several different Chinese new religions. On October 11, 2014, Zhang Lidong and Zhang Fan were sentenced to death, and executed on February 2, 2015. Lü Yingchun was sentenced to life imprisonment. The other members of the group, who were in the McDonald but did not directly participate in the murder, were sentenced to lesser penalties. To me it is clear that the group responsible for the brutal murder was not part of the Church of Almighty God, although Chinese authorities were able to persuade the media otherwise–but not the scholars who studied the movement seriously.

So, your verdict is “not guilty” for the McDonald murder. What about the other charges, kidnapping pastors or conspiring against the government?

Clearly the Church of Almighty God does not have a good opinion of the CCP and in fact identifies it with the Dragon of the Book of Revelation. However, if one reads its literature, the impression is that the Dragon would fall by itself, and there is no appeal to a revolution. As for the kidnapping, this would be my next field of study. I am familiar with the accounts by leaders of China Gospel Fellowship, who were allegedly the targets of a massive kidnapping (32 victims) in 2002. There are no court documents, since nobody was prosecuted for this crime—a strange story in itself. And I have also heard the version of the Church of the Almighty God, that China Gospel Fellowship had to invent the kidnapping after some members, including a top leader, passed with the Church of Almighty God. There is a lot that sounds strange or not persuasive in the whole story. Be patient. I believe I did a thorough research on the McDonald’s murder and plan to do the same for the kidnappings