German citizens should sign declarations that they did not and will not participate in any Scientology-related activity before obtaining some public and private jobs.

by Massimo Introvigne* — In 2020, I published a book about Scientology and the visual arts. I interviewed artists from different countries of the world who are Scientologists. I learned how in Germany artists had their exhibitions cancelled when it was “discovered” that they were Scientologists. For instance, artist Bia Wunderer had an exhibition cancelled in Berg, Bavaria, for the sole reason that she is a Scientologist.

Ironically, even Gottfried Helnwein, who will later become a superstar in the art world, with museums all over the world competing for hosting his works, had an art exhibition cancelled in Ingolstadt, Bavaria, in 1997. Bavaria’s Secretary of State of Interior, Hermann Regensburger, who also served on Ingolstadt’s town council, identified Helnwein as “an internationally known Scientologist,” with the consequence that exhibiting his works “would not be acceptable.” 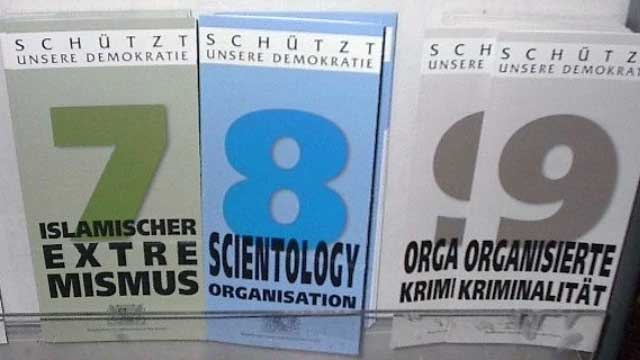 Jazz legend Chick Corea (1941–2021) also told me how several German jazz festivals were prevented from inviting him because he was a Scientologist, causing widespread protests both in the United States and in Germany, a country with an old and distinguished jazz culture. 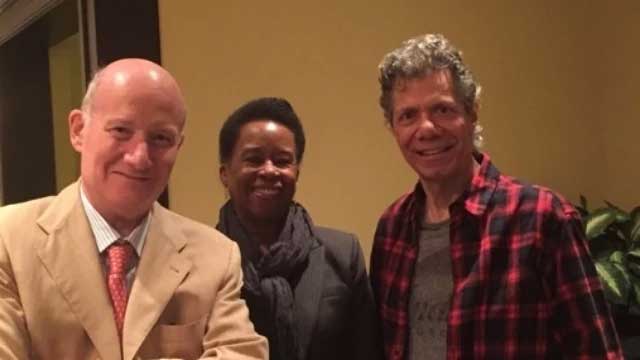 These stories always looked strange to me as an Italian. We do have our share of opponents of Scientology, but nobody would think of cancelling an exhibition of an artist because s/he is a Scientologist. In 2018 Claude Sandoz, a Scientologist painter, had an acclaimed exhibition at the Swiss Institute in Milan, and I do not remember anybody protesting because of his religious affiliation.

And while Bavaria tries to prevent Scientologists artists from exhibiting and performing, in the Italian Region of Piedmont in 2016 the State Parliament hosted a conference on philosopher Richard Kearney’s theory of “anatheism” co-organized by Italy’s National Church of Scientology. The speakers looked like a who’s who of Italian academic religious studies. Again, nobody complained. 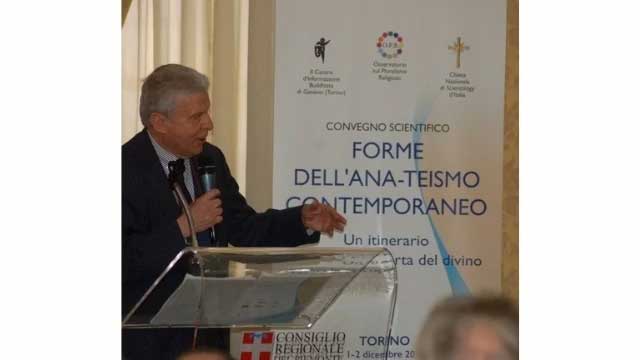 Sociologist Luigi Berzano speaking at the conference on anatheism in 2016 in Piedmont’ State Parliament in Torino.

In Germany, these are not occasional outbursts of intolerance. Local governments, political parties, and private businesses adopt what is called a “sect filter” (although “sekte” should rather be translated as “cult” in English). Anybody looking for a job, or for doing business with these institutions and companies, should sign a statement that s/he is not a Scientologist nor does s/he “use the technology of L. Ron Hubbard” (the founder of Scientology, 1911–1986). 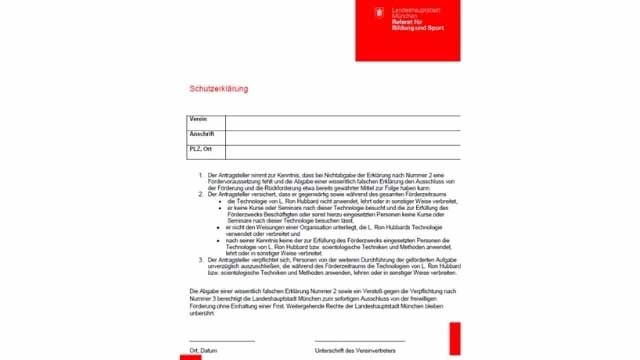 The sect filter was invented by an anti-cultist and former MP employed by the City-State of Hamburg as a professional anti-Scientology “expert,” Ursula Caberta, in 1995. Hamburg adopted the “sect filter” for employees and business dealing with the city and recommended its use to local private businesses. Scientologists started a good dozen of court proceedings against Hamburg, and consistently won, up to the Federal Administrative Court. In 2017, Hamburg gave up promoting the “sect filter” to private businesses but is still using it in the city administration.

Caberta agitated against Scientology and lectured about the beauty and benefits of the “sect filter” throughout Germany. It was adopted in Bavaria and elsewhere, including by large private companies. However, Scientologists won several court cases. In 2010, a court in Munich ruled that a kindergarten teacher, who had been fired after her ex-husband denounced her as a Scientologist, should be reinstated.

In 2019, the Munich Labour Court sided with the director of personnel of the well-known artistic museum and institution Haus der Kunst, who had been fired after 22 years of service following a campaign by anti-cultists and some politicians “exposing” him as a Scientologist. The case was then settled, with Haus der Kunst paying to the Scientologist Euro 110,000 as severance and allocating to him full pension.

On March 4, 2021, the State Administrative Court of Appeal of Baden-Württemberg uphold a 2020 judgement by the Administrative Court of Stuttgart and found against the State Air Traffic Security Agency. The latter had banned a skilled airport electrical technician with ten years of unreproachable service from entering the security area of any German airport only because the domestic intelligence service had alerted the Agency that he was a Scientologist.

Notwithstanding a string of victories in German courts (some of them having declared it a bona fide religion),which allows it to regularly operate as it does in other countries, Scientology in Germany remains, since 1997, under surveillance by the domestic intelligence service BfV (Bundesamt für Verfassungsschutz, Federal Office for the Protection of the Constitution) and its local branches, although in 24 years they have never reported any instance of violence, terrorism, or threat to Germany’s institutions.

Local branches of the BfV also issue press release criticizing specific initiatives of Scientology (such as one by the BfV of Baden-Württemberg of March 26, 2021). Again, in most other democratic countries it would look strange that an intelligence service would produce propaganda against a specific religious minority.

The same is done by both the BfV and local governments such as Bavaria or Hamburg, producing brochures alerting citizens against Scientology, as they do against radical Islam or organized crime.

Sometimes, German courts intervene. In 2009, the Higher Administrative Court of Berlin-Brandenburg ordered the removal of anti-Scientology propaganda placed by local authorities in front of the Berlin Church of Scientology. In 2001, the same Court had ordered the BfV to stop infiltrating agents inside the Scientology staff in Berlin. 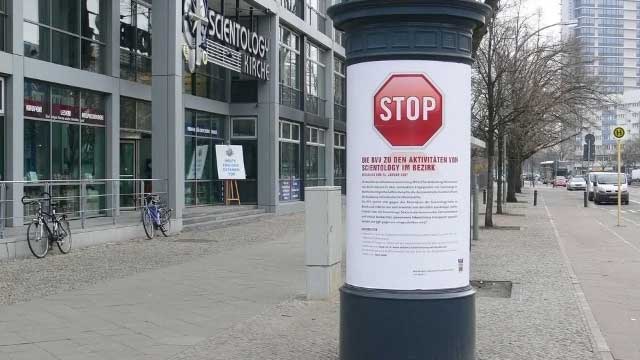 Removed: Anti-Scientology propaganda placed by the authorities in Berlin (credits).

German anti-Scientology activities are routinely criticized by the United States as gross violations of religious liberty. This criticism has also been echoed by official documents of the United Nations.

Germany has vigorously complained when its anti-Scientology activities have been described as non-democratic or compared by Scientologists to persecutions of minorities by the Nazis. It is certainly true that, unlike in Nazi times, members of discriminated religions do not go to jail or are tortured in Germany. Discrimination, however, should not be taken lightly, and is incompatible with international conventions on religious liberty.

Why is this happening in Germany, of all countries? Ursula Caberta or the BfV would answer by reciting the usual litany of accusations against Scientology, but they would answer the wrong question. Critics of Scientology exist everywhere, but Germany is the only democratic country with a “sect filter” and other extreme discriminatory initiatives.

In my opinion, there are three main answers to this question.

The first is the deep crisis of the mainline Christian churches in Germany. They incorrectly regarded the rise of new religious movements as an important reason for their loss of millions of active members (a phenomenon whose causes lie elsewhere). Both the Protestant and the Catholic churches created a network of “cult commissioners” (Sektenbeauftragte). Perhaps because the most famous Protestant “cult commissioner,” Friedrich-Wilhelm Haack (1935–1991), had an almost paranoid aversion to Scientology, the commissioners became the core of anti-Scientology opposition.

In general, Catholic “cult commissioners” in Germany were somewhat more moderate than their Protestant counterparts. However, when it came to Scientology, they never seriously challenged the Protestant narrative. Again, it is useful to compare the situation in Germany and in Italy, where two of the most senior scholars of religion who have opposed the anti-Scientology campaigns, Aldo Natale Terrin and Luigi Berzano, are both Catholic priests. They speak as scholars, not as representatives of the Catholic Church, yet there are no comparable figures in Germany.

In 1993, I proposed the distinction between a Christian “counter-cult movement” and a secular “anti-cult movement,” later adopted by several scholars. I first introduced it in the magazine of Danish Lutheran counter-cultist Johannes Aagaard (1928–2007). Although a fierce opponent of Scientology, Aagaard warned against the excessive cooperation with secular anti-cultists, who might also target Christian groups. In Germany, however, this caution was rare, and counter-cultists and anti-cultists regularly joined forces against Scientology.

A second factor explaining why in Germany opposition to Scientology became more extreme than elsewhere is that the country is the largest manufacturer of pharmaceutical products in the European Union. The word itself “psychiatry” was coined in Germany, in 1808, and the psychiatric lobby is well-established and influential in the country. Scientology’s campaigns against the use of psychiatric drugs and psychiatry in general make large pharmaceutical companies and psychiatric organizations its natural enemies. The fact that Scientology (and Gottfried Helnwein in some of its most famous paintings) keep reminding German psychiatrists of the cooperation of several of them with the Nazis (including for the euthanasia of disabled children) makes the conflict even harsher.

A third, important factor has to do with Germany’s Nazi past. It makes the country more ready to listen when some groups are accused of being “totalitarian” and “against democracy.” In fact, very few religions are organized in a democratic way (Catholics don’t elect their bishops), and many religionists put in writing millennial dreams of a brave new world where their ideas will rule a more peaceful society, yet anti-cultists astutely singled out Scientology as “anti-democratic,” a serious accusation in Germany.

In his textbook on the academic study of new religious movements (NRM), American scholar W. Michael Ashcraft noted how the academic discipline of NRM studies has been built on the refusal of the anti-cult narrative. A handful of scholars decided to cooperate with the anti-cultists and created a different discipline, “cultic studies,” which however “are not mainstream scholarship.”

For whatever reason, “cultic studies” criticizing Scientology came mostly from Canada, particularly from University of Alberta’s Stephen Kent and his pupils. Kent was never able to influence public policies in North America, but his depiction of Scientology as “anti-democratic” and “totalitarian” made him the ideal testimonial for the German campaigns.

Although Kent’s ideas about Scientology found only a limited acceptance among mainstream NRM studies scholars, in Germany they were disseminated by media and politicians among whom the obsession about “non-democratic” new religious movements had been fueled by the combined action of “sect commissioners” and the pharmaceutical-psychiatric lobby. These campaigns persuaded several German milieus that Scientology is somewhat dangerous. However, unlike—say—Russia or China, Germany is a democratic country with an independent judiciary, which has mostly ruled in favor of Scientology and Scientologists when they have been discriminated. But “sect filters” still exist, and the legal battle is not over.

*A paper presented at the ISFORB International Conference “Freedom of Religion in Europe Today: Under Critical Investigation,” Leuven, May 6–7, 2021.