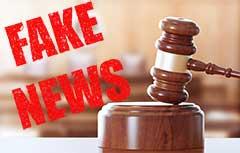 We publish the following news that does justice to parents subjected to public scorn because "guilty" of being Jehovah's Witnesses and of observing the dictates of their religion, without having committed, de facto, any crime. The case, dating back to September 2019, is a textbook example of how the fake news mechanism works admirably explained by Roberto Guidotti in this article.

(DIRE) Rome 3 October — Revoked a decree of the Juvenile Court against a couple of Jehovah's Witness parents, victim in the last year of a media pillory for opposing blood transfusion to their daughter. On 10 September 2020, the Milan Court of Appeal revoked a decree of the Milan Juvenile Court which limited the parental responsibility of a couple of Jehovah's Witnesses "solely because the parents had opposed the blood transfusions that the doctors had predicted necessary" for their daughter, while accepting proven alternative medical strategies.

The Court – reads a note from Jehovah's Witnesses – affirmed the legitimacy of the parents' behavior and found serious errors in the procedure adopted by the Juvenile Court. A year ago the story was at the center of a media case.

In September 2019, the couple had their 10-month-old daughter, a victim of a fall, hospitalized at the hospital in Legnano, where she had undergone surgery to remove a hematoma in the skull. After the operation, perfectly successful and with the child out of danger, the doctor on duty had proposed to the parents the administration of blood as a support therapy to raise blood values. Faced with the parents' request to use alternative medical therapies to blood transfusions, the doctor first alerted the Carabineers and then the Prosecutor's Office, which had requested and obtained from the Juvenile Court the provision limiting parental responsibility.

The story had caused great uproar. Newspapers and television news reported, in an untrustworthy way, that the child was saved only thanks to the intervention of the judge, who had authorized an "indispensable life-saving transfusion" denied by the parents, a transfusion which never occurred because it was not considered necessary.

With the 1991/2020 decree, however, the Milan Court of Appeal overturned the decision of the Juvenile Court and clarified the matter by stating that "the mere dissent of parents to blood transfusions in adherence to religious beliefs cannot be placed at the basis of an assessment of unfitness to exercise parental responsibility ". According to the panel, parents had the right to ask doctors, in accordance with their religious belief, that their child be treated with clinical strategies that did not involve the use of blood without this choice compromising their parental responsibility.

The judges also noted that the Juvenile Court should not have ruled because, according to Law 219/2017, "the competence to decide disputes in the event of dissent between parents and doctors on health treatments to be practiced for minors is exclusively of the Tutelary Judge” who, in this case, would have ruled only on the specific health treatment without questioning the suitability of the parents“. The decision of the Court of Appeal unequivocally establishes the realities of this affair and correctly qualifies the protagonists.

These were not fanatical parents, as unfairly defined by the media, but loving parents who had only asked for their daughter to be treated in accordance with their religious beliefs, with medical strategies equally effective as blood transfusions that would have saved their daughter from risks associated with such treatments.

A year ago – the note concludes – the media portrayed the situation incorrectly, even claiming that the girl had been saved by a blood transfusion, while - as confirmed by the decree - there was no transfusion. The hope is that this sad story will help to promote better information on Jehovah's Witnesses, free from stereotypes and prejudices.” (Agenzia DIRE)