Privileging the saisines (i.e., reports by those who write to denounce a “cultic deviance”) may only lead to biased conclusions.

by Massimo Introvigne — The MIVILUDES, the French Inter-ministerial mission for monitoring and combating cultic deviances (dérives sectaires), which is now part of the Ministry of the Interior, published last week its report for the years 2018-2020.

Like Diogenes wandering with his lantern in search of an honest man, the MIVILUDES wanders around France with the anti-cult ideology as its lantern looking for dishonest “cultic deviances.” Dérives sectaires is a quintessentially French formula and invention, of which MIVILUDES is no less proud than of the Tour Eiffel. It comes out handy to find “cultic” dangers even where no “cult” (which should be translated into French with the corresponding derogatory word, secte) exists.

The report does include some informative parts, mostly found in the pages devoted by researcher Bilel Ainine to the Muslim folk therapeutic practices of roqya and hiyama, although even here the use of an anti-cult and police jargon makes an otherwise interesting text both less readable and less persuasive. 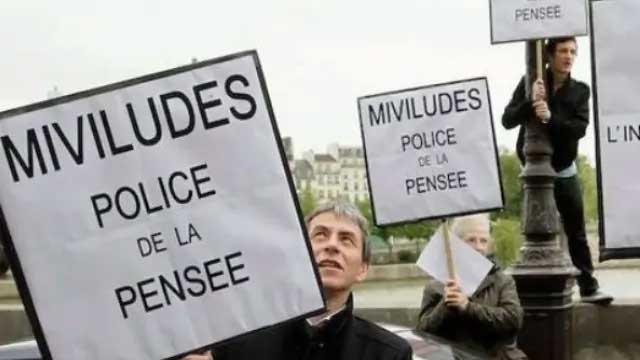 Protests against the MIVILUDES in France

Several cases in the report may illustrate how the system works. I recently devoted a long articcle and an encyclopedia entry to La Famille, a movement of remote Jansenist origins “discovered” by anti-cultists after more than one century of peaceful existence in France. The MIVILUDES has to admit that this group has nothing to do with the usual description of a “cult” (secte) by French anti-cultists, which focuses on a leader (called “guru” even when operating outside the Eastern religious traditions) who brainwashes the followers and takes their money. Nothing remotely similar is at work in La Famille.

Yet, the MIVILUDES finds something to criticize. Since it is now fashionable to denounce some groups as “separatist,” i.e., separated from the rest of the society, the MIVILUDES claims that in La Famille an “invisible barrier” exists dividing members from the other citizens “based on a religious quest for purity,” just as it happens with “the Jehovah’s Witnesses, the Plymouth Brethren, and the Mormons.” Lumping together the Jehovah’s Witnesses and the Plymouth Brethren, who don’t vote in the elections, with the Latter-day Saints, aka the “Mormons,” who at one stage counted among their members the U.S. congressional leaders of both main political parties and the Republican candidate for President shows that whoever wrote the report is not very familiar with the “Mormons.” Mitt Romney was a former “Mormon” bishop and stake president, well-known as such, who got 47% of the American popular vote in 2012, not exactly an example of “separatism” and lack of interest by the “Mormons” for the affairs of the larger society.

As for La Famille, the MIVILUDES finds there “risks for the minors,” calls it a secte (after having admitted that the typical features of its notion of dérives sectaires are not there), and vows to remain ready to “reevaluate the serious risks generated by its activities.”

If somebody somewhere sometimes mentioned that a group may include “cultic deviances,” the group gets caught in the report’s spider web. It is the case of Anthroposophy and Soka Gakkai, which “raise questions” not better identified, and even of the highly esteemed Plum Village (Village des Pruniers) near Bordeaux, founded by Vietnamese Buddhist monk Thích Nhất Hạnh, who received in 2015 the Pacem in Terris Peace and Freedom Award, one of the highest honors awarded by Catholic institutions in the United States. 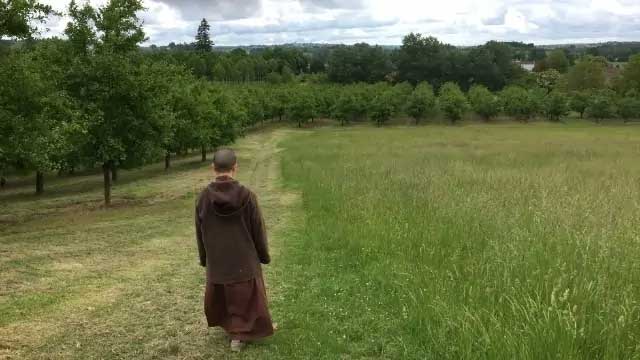 At the Plum Village

Perhaps the best example that the MIVILUDES would take seriously any report about “cultic deviances” is a paragraph devoted to the possible Satanist origins of incidents of cattle mutilations. This has been for decades a part of the Satanism scare, and virtually all scholarly books studying it describe the Satanic interpretations of cattle mutilation (which is mostly produced by animal predators) as the typical product of a moral panic. The MIVILUDES is aware that Satanic theories of cattle mutilation have been ridiculed by scholars, and is somewhat more cautious than usual. Yet, it calls the Satanic theory “sometimes worth being considered.” It notes that “the first four cases [of cattle mutilation in France in 2020] may correspond, according to the dates, to neo-pagan celebrations colored with witchcraft, or coincide with the Celtic feast of Beltane, connected with the celebration of nature.” A quick look at the studies of Satanic panics elsewhere would have persuaded the MIVILUDES that, precisely because they celebrate nature, neo-pagans and followers of Wicca certainly do not go around mutilating cattle, and no such incident has ever been reported.

There is also a part about Scientology that one might take as humorous if it would not involve the risk of perpetuating discrimination. We read that there are less and less French citizens complaining about Scientology, from 220 in 2015 to a mere 26 in 2020. A normal observer would conclude that Scientology is now largely accepted by French society, and there are no “cultic deviances” there. However, the astute observers of the MIVILUDES are not easily fooled, and may consider even the lack of complaints as evidence that there should be complaints. The report states that now “MIVILUDES receives few testimonies about Scientology,” but Scientologists “manage businesses,” and the authors of the reports even noticed that during the COVID-19 pandemic Scientology volunteers “decontaminated continuously and deeply apartments, buses, and even air conditioning systems.” Normally, one would conclude from this that Scientologists are good citizens well integrated in the society. Not the MIVILUDES, which sees in these activities something sinister, and implicitly calls for discrimination against business operated by Scientologists.

Theoretically, the MIVILUDES should not pass judgment on doctrines. But indirectly it does. For instance, it tells us that the so-called “prosperity theology,” popular among Pentecostals, is “a wrong interpretation of the Scriptures” according to the National Council of French Evangelicals, and that some Buddhist groups are not connected with the “traditional structure of the Buddhist movement.” Apart from the Napoleon-like attempt to imagine a “Buddhist church” (just as Napoleon tried to invent a “Jewish church” to control the French Jews: more about Napoleon later), which would then decide who is or is not Buddhist, whether a Buddhist or Evangelical theology is traditional or innovative, approved or not approved by some religious body or federation, should be totally irrelevant for the governmental institutions of a secular state.

It is also questionable that the MIVILUDES finds a clue of “cultic deviances” in “a backward vision of society” evidenced inter alia by “a rejection of abortion.” The majority of French citizens, according to polls, is in favor of abortion. But one wonders what the MIVILUDES would make of a religious group whose leader publicly stated that “Abortion is not a ‘lesser evil.’ It is a crime. It is wiping out one to save another. That is what the mafia does. It is a crime, it is absolutely evil.” These are words by Pope Francis, officially published in the Web site of the Vatican – in French as well, should the MIVILUDES prefer to read it in its language. The problem is not whether the Pope is right or wrong, it is whether a religious judgment implying “a rejection of abortion” is protected by religious liberty in France or regarded as a “cultic deviance.”

The problem of this, and of previous, MIVILUDES reports is its method. It hypostatizes as an almost sacred object the “saisine.” As evidenced by the uncertainties of the dictionaries, this French word is not easy to translate. In practice, a “saisine” is a report or complaint received by the MIVILUDES about a group that, according to its accusers, exhibits “cultic deviances.” The MIVILUDES receives the “saisines,” classifies and discusses them, and elaborates statistics and conclusions on their basis. In 2020, 85.6% of the “saisines” came from private citizens (a minority came from associations, administrative bodies, politicians, businesses, or the media). 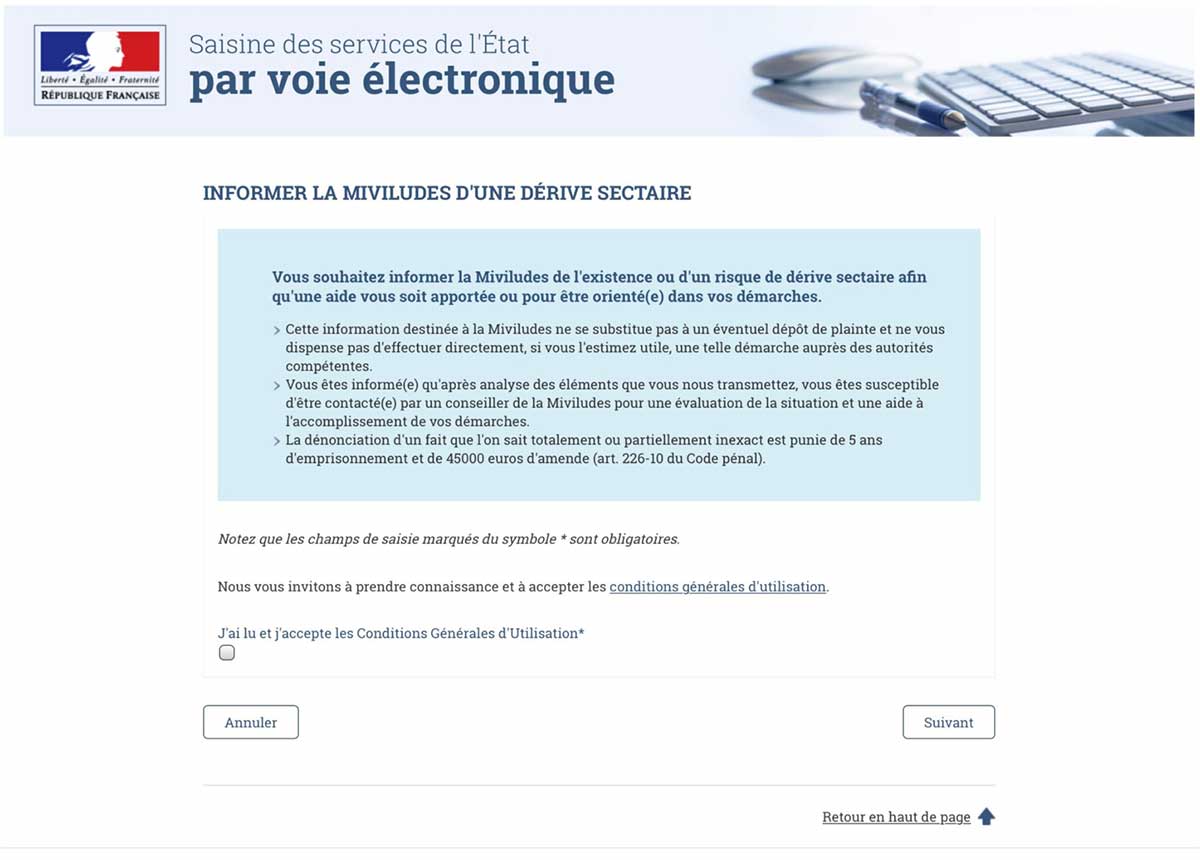 So you want to be an informer? MIVILUDES’ web form to report on “dérives sectaires.”

This method would not be regarded as admissible for the serious study of any social phenomenon. The sample is obviously self-selected and negatively biased. Only those who do not like a certain movement report it to the MIVILUDES. Nobody writes to the MIVILUDES to report how happy they are in a new religious movement (perhaps they should). There is no evidence in the report that denunciations are assessed by interviewing members of the relevant groups, or scholars who have a neutral attitude to new religious movements. Rather, the denunciations find their way to the report.

For example, in the section on “Evangelical Churches” The Church of Almighty God (CAG) is mentioned because the MIVILUDES has received three (3) “disturbing” “saisines” on this movement. Apart from the well-known fact that Chinese propaganda often sends to European public and private institutions fake and defamatory reports on CAG refugees, what is “disturbing” is that the CAG is classified among the “Evangelical Churches,” a mistake the MIVILUDES would have avoided had it read some scholarly literature on the movement rather than relying on the “saisines” only.

The MIVILUDES insists with its cult of the “saisines” even if it knows that they are rarely reliable, as evidenced by the fact that out of more than 3,000 “saisines” received in 2020, only 16 were forwarded to prosecutors for possible legal intervention (which does not mean that the prosecutors really acted on their basis).

A good example is Thích Nhất Hạnh’s Plum Village, a community many would not regard as “cultic” or controversial. It has a certain prominence in the report, based on 12 “saisines” received by the MIVILUDES in three years (on average, 4 per year). The report includes the complaint by somebody who wrote that after one week at the Plum village “my sister makes astonishing remarks and she is no longer the same person.” Another complainant wrote to MIVILUDES that the Plum Village “causes enormous damages to the persons by indoctrinating them.”

Again, there is no evidence that the Plum Village has been allowed to defend itself, or scholars familiar with Thích Nhất Hạnh and the Village have been consulted for a comment. This is not only bad methodology, it is a road leading infallibly to slander and defamation. Based on a few hostile witnesses, a whole community is pilloried and publicly exposed as deviant.

Now, finally, back to Napoleon. I had finished this review when an American correspondent, who is happily protected in her country by the First Amendment from any consequence she may incur in France for poking fun at governmental institutions, wrote to me that, in the interest of better understanding the system, she sent a “saisine” herself to the MIVILUDES. She discovered that, while in the United States before being allowed to interact with most governmental and even private Web sites on serious matters your identity or at least your email is verified, nothing similar occurs when you send a “saisine” to MIVILUDES. In fact, she managed to go through with an (admittedly well-written and historically accurate) “saisine” written by Napoleon Bonaparte from St. Helena, complaining that due to the wrong predictions of his fortune-teller, Marie-Anne Lenormand, he “lost his job, his home, and even an empire.” 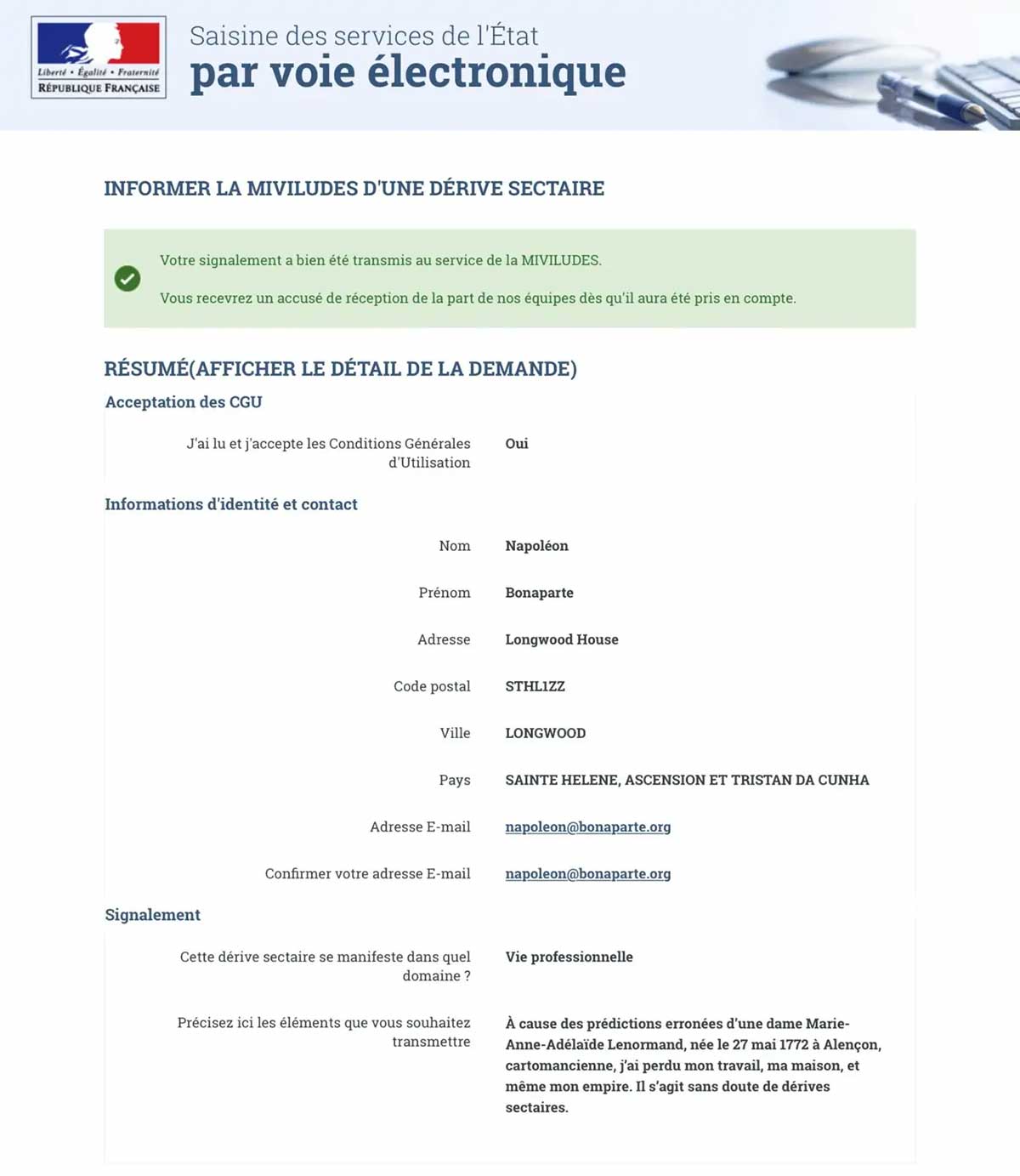 Presumably, the MIVILUDES will recognize this particular “saisine” as a prank, but it found no electronic obstacles and was regularly delivered. One may suspect that, if somebody wants to slander a religious movement, it may be enough to send to the MIVILUDES half a dozen of “saisines” signed by real people with real emails, and the “cultic deviances” of the group will be publicly exposed next year.