In the past 80 years many have asked themselves: how could this happen? The vast majority of German citizens hated the Jews, persecuted them or were conscious accomplices of such persecution. What made it possible? What drove almost an entire population, with a few exceptions, too few, to commit unimaginable cruelties? Who convinced them and how?

The most convincing answer seems to have been given by Daniel J. Goldhagen, author of the volume Hitler's Willing Executioners. Ordinary Germans and the Holocaust. In his work Goldhagen demonstrates and documents that Germans of all backgrounds, not just SS or Nazi party members, carried out one of the worst genocides in history. Ordinary men and women brutalized and murdered Jews out of ideological conviction and free choice.

So the question should be: how and when did this dehumanizing ideology arise and how did it take root in the German society of the time?

This question was answered by the sociologist of religions Massimo Introvigne, founder and director of CESNUR (Center for the Study of New Religions). According to Introvigne, campaigns of hatred and defamation against a religion or a group can generate a widespread climate of intolerance. If such a campaign persists, sooner or later, it will lead to discrimination of those affected by it and they will begin to lose rights. Continuing with intolerance and discrimination leads to persecution.

The defamatory campaigns against Jews have continued for centuries, accused almost in every country as "Christ's murderers". Then they were accused of contaminating society with alleged usury and a thousand other specious accusations. Nazism made the "quality" leap by adding the racial aspect, describing Jews as an inferior and harmful race, recognizable by their somatic features, smell and other unpleasant anatomical details. Under the impetus of this campaign of hatred, almost all Germans came to hate Jews and to accept as "deserved" the persecution they later suffered.

Jews protest, rightly so, when someone talks about the persecution of other human groups and compares it to the Holocaust. But let us not forget that also gypsies, Jehovah's Witnesses and homosexuals were persecuted and murdered by the Nazis. Certainly in smaller numbers, but the difference in number does not make the persecution suffered any less serious.

A persecution that is not extraneous to our time.

Kristallnacht—and What Groups Like ADL Are Doing About Its Legacy

by John Evans — Listen to the sound of hate. Listen as it grows. From soft-spoken slander to sardonic laugh; from the bang of a gavel to fiery speech, then the jeers of the mob, the screaming of epithets, the explosion of gunfire—and finally, at the end, the tinkling of broken glass.

Today marks the 83rd anniversary of Kristallnacht, the “night of broken glass,” so named for the myriad shards of glass littering the streets of Germany after a riot that saw the destruction of Jewish shops, buildings, and synagogues in 1938. 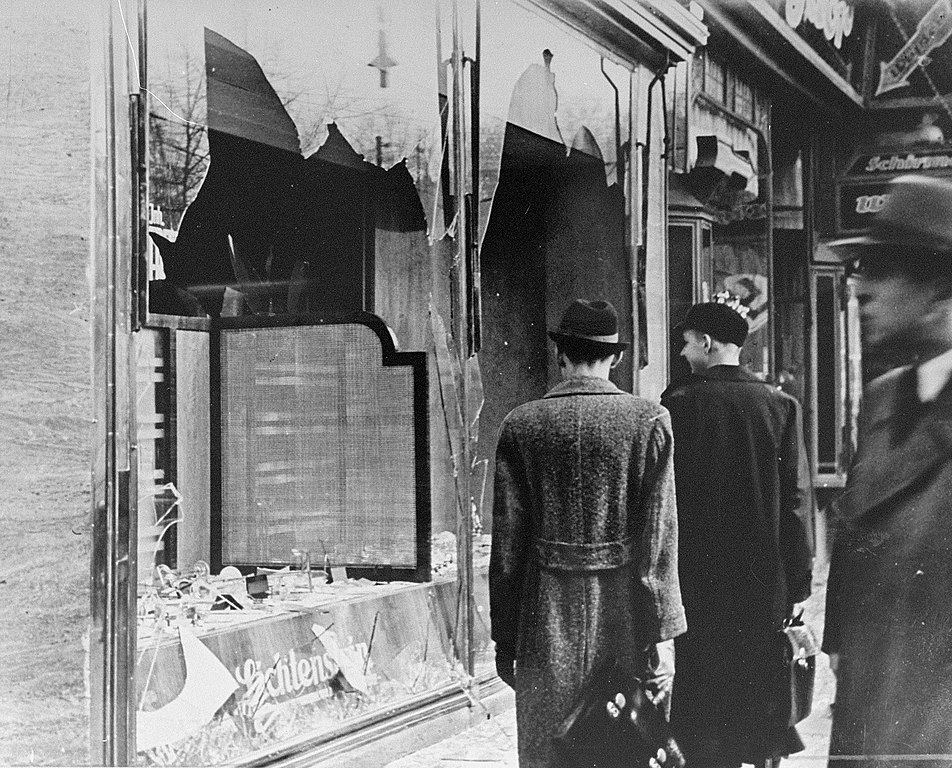 German citizens look the other way on nov. 10 1938, the day after Kristallnacht. What they see or don't want to see are destroyed Jewish shops and houses (credits).

Nazi paramilitary thugs along with private citizens demolished nearly 300 synagogues throughout Germany, Austria and the Sudetenland in a rampage that destroyed 7,000 Jewish businesses and ended in the death of hundreds of Jews and the incarceration of 30,000 others in concentration camps. The highly organized nationwide pogrom was greenlit by Hitler and marked the escalation of Nazi anti-Semitism from economic and social oppression to overt violence, beatings, imprisonment, torture and murder.

Listen to the sound of hate. Listen as it grows.

Police and civil authorities were warned in advance not to interfere, except to protect property owned by non-Jews. Even insurance on damaged property was confiscated by German authorities for “reparations” (calculated in the billions) for the alleged shooting of a German diplomat by a young Jew.

Kristallnacht is where many date the Holocaust began.

How does one mark such a dark time? With lamentations? Prayers and fasting? The Anti-Defamation League (ADL) is opting instead for solutions to hate and bigotry in all its forms—marking the 83rd anniversary of Kristallnacht with its own annual Never Is Now summit, so-named after the familiar response to the Holocaust: Never Again.

Never Is Now opened the conversation to scholars, students, celebrities, community leaders and heroes, “all,” as ADL puts it, “united in an effort to rally our communities in the pursuit of a better tomorrow. In the midst of the highest rates of anti-Semitic incidents ever tracked by ADL, we’re tackling crucial conversations about hate and bigotry in today’s world and creating a stronger, more inclusive movement for the future.”

The three-day conference was kicked off by U.S. Vice President Kamala Harris—herself no stranger to prejudice as a Black, South Asian American—and continued this week, addressing subjects like the spreading of online hate through social media, the link between disinformation and bigotry, the need for all branches of Judaism to unite against anti-Semitism, the connection between anti-Black speech, racism and anti-Jewish hate, and many other topics.

Let us pray that through such conversations and the unity they foster; through problem-solving instead of handwringing; through education rather than demagoguery, the sounds of hate will be drowned out by the gentle murmur of joy.

That, or the tranquility of peace.