Bitter Winter starts a series on the bloody repression of a large religious minority, investigating why it is happening.

by Massimo Introvigne — One of the oldest and bloodiest persecutions of a religious minority in the world today is targeting the Ahmadis in Pakistan. In this series, we will examine where this persecution comes from and who fuels it. First, we will have a look at who the Ahmadis exactly are.

Mirza Ghulam Ahmad (1835–1908) was born and lived for most of his life in Qadian, Punjab (for which his followers are sometimes called Qadianis). In the years 1880-1884 he wrote the four volumes of the work Barahin-i-Ahmadiyya, intended to show the superiority of Islam on other faiths, and particularly on Christianity, welcomed by many Islamic circles. In 1889, he announced to have received a divine revelation, around which a community of followers gathered.

The break with the more orthodox Muslim circles occurred in 1891, when Ahmad proclaimed to be both the Masih (messiah, the same title given to Jesus by Muslims) and the Mahdi expected to appear in the last times to restore the faith. Muslim clerics declared him heretic, and his messianic claims were also criticized by Christians and Hindus, particularly those in the Arya Samaj movement. Ahmad died in Lahore on May 26, 1908, and is buried in Qadian, which is still an important place of pilgrimage for the Ahmadiyya movement.

His successor, the medical doctor Hakeem Noor-ud-Din (1841–1914), assumed the title of khalifah, and organized the first mission to a Western country, the United Kingdom. He could not prevent divisions in the movement, which manifested as a schism after his death on March 13, 1914. The majority of the community followed the Jama’at-i-Ahmadiyya (Ahmadiyya Movement), originally based in Rabwah, present-day Pakistan, presided over by Ahmad’s son, Mirza Bashirud Mahmud Ahmad (1889–1965), who was succeeded by Mirza Nasir Ahmad (1909–1982), Mirza Tahir Ahmad (1928–2003), and Mirza Masroor Ahmad (born in 1950), all with the title of khalifah. 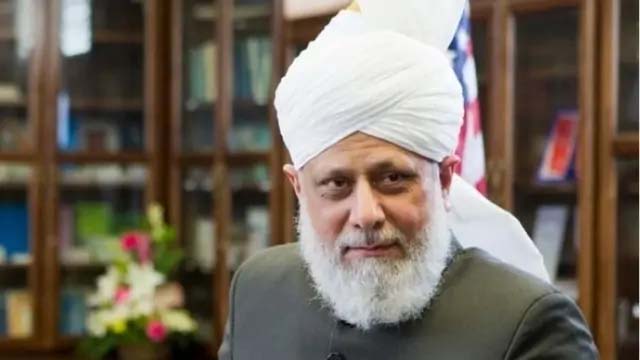 A minority, based in Lahore, gathered in the Ahmadiyya Anjuman Isha’at-e-Islam Lahore (Ahmadiyya Society for the Spread of Islam in Lahore), closer to traditional Islam, which it tried to spread in the West with a minimum of adaptation and with less insistence on the messianic nature of the founder. Up to the 21st century, the majority Ahmadis in Rabwah (and, to a lesser extent, the much smaller minority group in Lahore) continued to grow through their active proselytizing not only in Asia but in Africa, Indonesia, the United States and Europe. The majority group is present in 209 countries and claims over ten million members. The minority group represents less than 0.5% of the world Ahmadi population. The main international headquarters for the majority branch are in London, where a satellite television channel broadcasts religious programs to the world.

Ahmadis consider themselves followers of Islam in its truest and most authentic form, and they vigorously reject any accusation of heresy or deviation. They mainly use the expression ilham, which designates the revelations granted to saints, about the message they claim Ahmad received from God, an expression that should be regarded as acceptable in an Islamic context. However, other Muslims accuse Ahmad of having considered himself a “prophet,” whereas Islam teaches that no prophet could arise after Muhammad. The Ahmadi formula for Ahmad, “at the same time a prophet and a follower of the Holy Prophet [Muhammad],” is not enough to establish Ahmadiyya’s orthodoxy in the eyes of Muslim clerics, or at least of the most conservative of them.

Another aspect that has caused disagreements between Ahmadis and conservative Muslim circles is Ahmad’s doctrine on holy war (the military aspect of jihad, a word that also means struggle against one’s own imperfections), which the founder of Ahmadiyya declared “forbidden” for modern times, and destined to be replaced entirely by the peaceful preaching of Islam. It is because of this doctrine that Ahmad during his lifetime was accused of having placed himself at the service of the English colonial power, and today Ahmadis are accused by radical Muslims of not supporting what they see as righteous armed struggles in Palestine, Kashmir, and elsewhere.

Other ideas of Ahmad on the “separation of mosque and state,” which paralleled Western ideas on separation of church and state, and religious freedom for non-Muslims and Muslims alike, attracted many but again caused hostile reactions from conservative milieus.

Christians and Ahmadis are persecuted together in Pakistan and other countries, and the latest khalifahs, including the present one Mirza Masroor Ahmad, have multiplied initiatives on peace, human rights, and religious freedom involving members of several different religions. 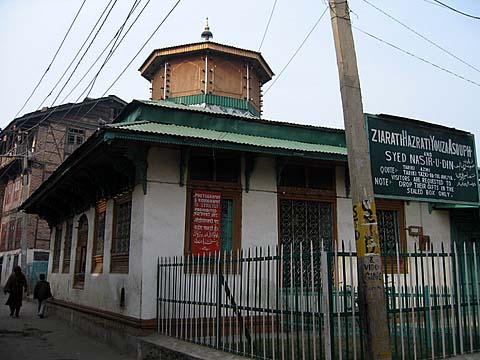 The Rozabal shrine in Srinagar, where Ahmadis and others believe Jesus is buried (credits).

On the other hand, a theological dialogue with Christians is more difficult, because Ahmadis believe that Ahmad was “the second coming of Christ,” not in the sense that in him Jesus returned to Earth, but rather meaning that the new messiah came “in the spirit and power of Jesus Christ.” Ahmadis also believe that Jesus was crucified, but did not die on the cross. Deposed from the cross still alive, he was healed through the application of a prodigious ointment, marhan-i-Isa, whose formula had been communicated by revelation to the disciples, and went on to preach the Gospel to the lost tribes of Israel in Afghanistan and Kashmir. In the latter area, Ahmadis (and several other religious groups) believe, Jesus died at age 120, and his grave can still be visited in Srinagar.

Common persecutions have however taught Christians and Ahmadis to set aside theological differences and engage in a “dialogue of blood” and common advocacy of religious liberty. We will trace the origins of the present persecution of the Ahmadis in the next article.