hey were reportedly arrested for being outspoken about a recent notification that issued the complete replacement of textbooks in Tibetan with textbooks in Chinese.

Local Authorities notified the parents and families about the change prior to the start of the fall semester, stating that from September 2021 onwards, all their children must go to school only with the newly introduced textbooks in Chinese. Photographic evidence received from sources shows police authorities sitting outdoors on the grassland explaining this to Tibetan parents. 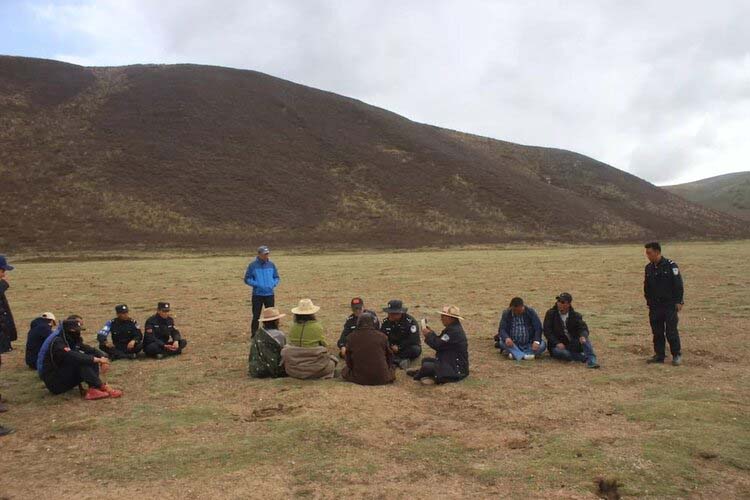 After learning of the enforced order, Yang Ri and Guldak expressed their concerns in a chat group on WeChat, a multipurpose messaging application heavily used by Tibetans inside Tibet. A source quoted one of the students saying “With this move, we Tibetans will surely face problems in the future”.

The same source quoted a statement by other students, “If the Chinese government completely transforms the current textbooks into the Chinese language, students [Tibetans] won’t be able to continue in the future. If that is the case, it is better for us to live a nomadic life and look after the livestock [yaks and sheep] in the mountains instead of attending school”. The source further said there are many Tibetans put behind bars for voicing similar deeply felt concerns against the replacement of the Tibetan language.

The replacement of the Tibetan language, and therefore the marginalisation of Tibetan identity, has gained momentum in the past decades under ambiguous laws and policies, such as laws that purportedly promote bilingual education, and the Chinese Communist Party’s stringent ban on informal Tibetan classes in Tibetan monasteries, whose management have long been placed under CCP control.

Promoting Mandarin Chinese as the national common language from infancy was also promulgated in the 14th Five Year Plan (2021-2025). On 21 July 2021, the General Office of the Ministry of Education issued a notice clarifying that from September 2021 onwards, kindergartens in all ethnic and rural areas will be taught in Mandarin Chinese to promote a standardised national language and equity of so-called “high-quality education”.

Yang Ri and Guldak’s arrest in Golog follows Rinchen Kyi’s arrest on 1 August. Also from the same prefecture, she was a dedicated Tibetan teacher at Sengdruk Taktse Middle School, which was forcefully shut down without any official clarification on 8 July.

In July, an announcement by the Ministry of Education in Tsolho, Malho and Yushu Tibetan Autonomous Prefectures in Qinghai Province issued notices, in Chinese, of higher admission score requirements for Tibetans enrolling in national high schools where Tibetan is the main medium of instruction, a move which sources in the area have described as strategic means of reducing access to Tibetan education.

The detention of Sherab Dorjee and forced replacement of the Tibetan language in Gyalten Getsa Tibetan School were also reported in the neighbouring traditional province of Kham.