Those who argue that the G-word is not appropriate and the hired guns for Beijing play different games. But in both cases, the CCP wins.

by Marco Respinti — On April 29, 2021, the US Embassy to Italy in Rome hosted a webinar of its “Transatlantic Thursdays” series, entitled Human Rights in China: the Uyghur Community. Introduced by Kimberly Krhounek, Minister Counselor for Political Affairs at the US Embassy in Rome, and moderated by Giulia Pompili, Asia-Pacific desk journalist at Il Foglio, two Uyghur panelists took the floor: Rushan Abbas, founder of the Washington-based “Campaign for Uyghurs”, and singer Rahima Mahmut, director of the London, UK, branch of the World Uyghur Congress.

The video of the webinar

The two keynote speakers effectively illustrated the situation in the Xinjiang Uyghur Autonomous Region (XUAR), that its non-Han inhabitants call East Turkistan, where, out of its hatred of religion, the CCP harshly persecutes Uyghurs and other Turkic people of Muslim faith, along with other religious groups. They told personal stories and important anecdotes, adding details and substantiating their charges against the Chinese regime with strong evidence. 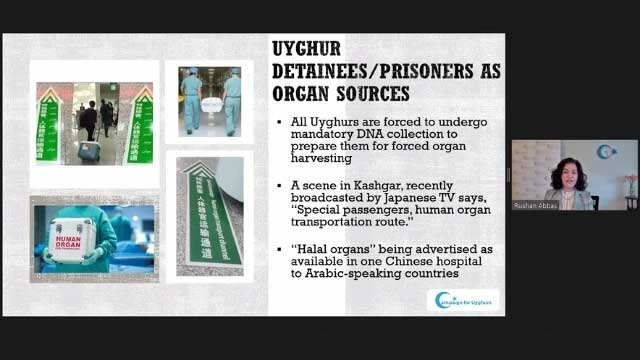 Rushan Abbas speaking at the Webinar

Rushan Abbas (who quoted Bitter Winter) displayed revealing pictures of the sufferings of the Uyghurs, who are subject to all kinds of cruelty, from kidnapping to unlawful incarceration, from forced weddings to forced sterilization of women, from organ harvesting to compulsory abortions. Rahima Mahmut focused on culture, highlighting the war waged by the CCP against the Uyghur language and traditions, in a general attempt to wipe out her people’s identity. She also read some beautiful Uyghur poems in her English translations, and recited verses in the Uyghur language that resonated as the voice of the voiceless.

A question posed by the undersigned, during the Q&A session, drew much of the focus on the label “genocide,” still a controversial G-word. I in fact asked whether the panelists have an idea why, not only CCP officials or hired guns on the Party’s payroll, but also respected independent commentators still hesitate to define genocide the Xinjiang/East Turkistan crisis. They stop short of reaching the obvious conclusion. They are aware of all the evidence of the genocide, but they refrain to call it a genocide. They denounce it as if it were a genocide, but they do not dare to call it genocide.

A brief but clear statement from the audience by Italian MP Paolo Formentini, who recently introduced a resolution on genocide to indict China in the Italian Parliament, strengthened the case. Formentini commented that, no matter how hard it will be to pass his resolution in the Italian parliament, nonetheless what the CCP does in XUAR “is of course genocide.”

Generally, the hesitant “good guys” affirm that the Uyghur crisis is not a genocide because there is no attempt at the physical elimination of all members of a persecuted minority. But the two Uyghur speakers showed that the opposite is true, underlying that the crimes committed by the CCP in Xinjiang/East Turkistan qualify for genocide under the UN Genocide Convention since they meet its five requirements. Rahima Mahmut pointed specifically at two very recent documents: the report The Uyghur Genocide: An Examination of China’s Breaches of the 1948 Genocide Convention, published by the Washington-based Newlines Institute for Strategy and Policy in collaboration with the Raoul Wallenberg Centre for Human Rights in Montreal, Canada, and the opinion of leading lawyers at Essex Court Chambers in London, led by Alison McDonald QC.

The first document—that Bitter Winter reviewed and that, by the way, the Jewish News also promoted—clearly states: “While commission of any one of the Genocide Convention’s enumerated acts with the requisite intent can sustain a finding of genocide, the evidence presented in this report supports a finding of genocide against the Uyghurs in breach of each and every act prohibited in Article II” of the UN Convention on the Prevention and Punishment of the Crime of Genocide, commonly called “Genocide Convention,” “(a) through (e).” Namely, “(a) Killing members of the group. […] (b) Causing serious bodily or mental harm to members of the group. […] (c) Deliberately inflicting on the group conditions of life calculated to bring about its physical destruction in whole or in part. […] (d) Imposing measures intended to prevent births within the group. […] (e) Forcibly transferring children of the group to another group.” And it concludes that “China bears State responsibility for an ongoing genocide against the Uyghurs, in breach of the Genocide Convention.”

The second document is extremely important, being a 100-pages legal opinion—the first legal opinion on this matter. After considering principles and facts in a very detailed way, this legal statement concludes “that the available evidence credibly establishes that crimes against humanity and the crime of genocide” (two different crimes, legally speaking) “have been committed” by the Chinese regime in XUAR.

Its last paragraph underlines: “Serious international crimes are of concern to all States, and, in line with the authors of other reports, we consider there to be a strong imperative for national governments to take urgent action to prevent the ongoing atrocities committed against the Uyghur population of XUAR. At the very least, national governments should render official statements recognising the atrocities being committed and stating their view that there is evidence of the commission of crimes against humanity and/or genocide. They may also consider whether it is possible for them to exercise criminal jurisdiction over any individuals suspected of the crime and/or to impose Magnitsky sanctions in line with their domestic legislation. They should also initiate and engage in diplomatic efforts to demand a full and transparent investigation into the facts on the ground, the trial and punishment of those found to be responsible for any international crimes, and the cessation of further atrocities against the Uyghur population.”

Commentators and possibly even scholars who don’t dare to pronounce the G-word should be always carefully distinguished from CCP propagandists and hired guns. The former may have intellectually honest reasons for their shyness, the only ignoble ones being longing for social acceptance or supporting governments and businesses that want to protect their trade with China. Readers at large can still benefit from their research and utterances. But inevitably their refusal to qualify what is happening in XUAR as “genocide” is an undeserved gift to genocidal Communist China. This is the substance of the answer that the two Uyghur panelists gave to my question. 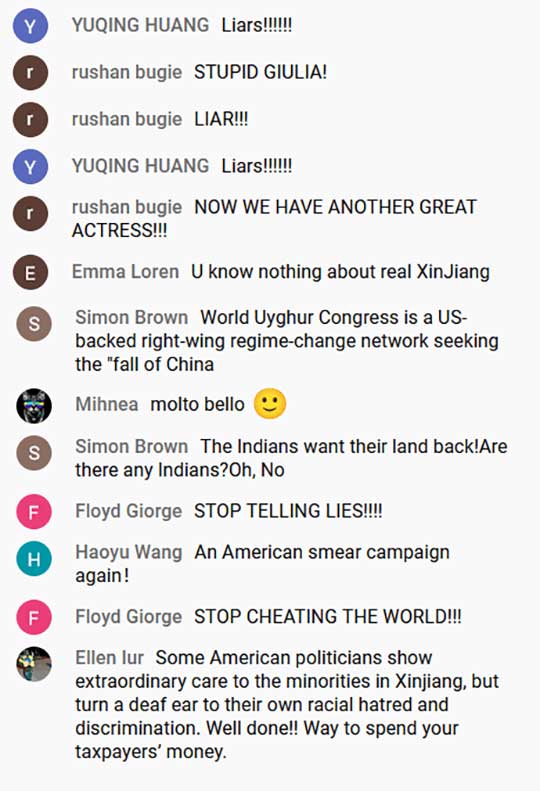 The army of haters and trolls that unleashed their bile against the US (for hosting the webinar), the two speakers, and the moderator (with personal offences) on YouTube demonstrates that the CCP doesn’t need any help to spread lies. It has its own legions of trolls.