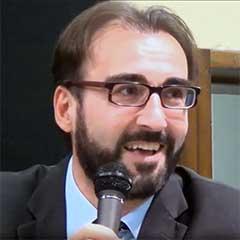 Born in La Spezia, Italy, 1974, Marco Croce is an Assistant professor in ecclesiastical law and canon law since November 2017 at the department of juridical sciences of the University of Florence.

He teaches Law and religions and Ecclesiastical Law at the University of Florence Law School.

He obtained a Ph.D. in constitutional justice and fundamental rights in 2010 at the University of Pisa with a dissertation on "Religious freedom in the Italian constitutional law" (supervisor: Professor Roberto Romboli). The Ph.D. thesis was judged among the best three at the Leopoldo Elia award in 2010 and obtained the third place and a diploma of honor at the Fasto Cuocolo Memorial Prize in 2011.

From May to October 2017, after winning a national competition organized by the Italian Interior Ministry, he participated as a lecturer to the preparatory courses for clergy members of religions without a negotiated legal framework, organized by a consortium of Italian universities (Florence, Bologna, Pisa, Bari, Cosenza, Salerno, Palermo).

He is a member of the editorial board of the law reviews Quaderni di Diritto e Politica Ecclesistica and Osservatorio sulle fonti.

He participated to several Italian and International scientific congresses and he was a member of several research teams. He is a member of the scientific associations "Gruppo di Pisa" and "ADEC".