A Campaign to Discriminate Religious Charities in Australia Easter articles against Scientology tried to revive old attempts to use the Charities Act to discriminate against religions some politicians and media do not like.

by Massimo Introvigne — It is customary in Australia to publish stories about religion for Easter, and The Sydney Morning Herald and The Age, both owned by Nine Publishing (the company that resulted from the merger between Nine and Fairfax) obliged by publishing aggressive articles against the Church of Scientology.

The articles are a digest of anti-Scientology rhetoric, insisting on what has recently became a curious fad among anti-cultists, the idea that Scientology is “shrinking fast,” what one of the best Australian scholars of new religious movements, Bernard Doherty, has recently called the “historically naïve predictions of its demise.”

Some of the folk statistics about Scientology are based on a false quote from the American Religious Identification Survey (ARIS), which reportedly found only 28,000 Scientologists in the United States in 2008. In fact, the 2008 ARIS did not include statistics for Scientology. However, one anti-cult Web site claimed they had interviewed by telephone the ARIS team, getting from that phone call the figure of 28,000, which was unfortunately quoted also by reputable scholars. When I decided to look into the matter, I contacted the colleague who was the main author of the 2008 ARIS report, Professor Barry Kosmin. He told me that he and the ARIS team were indeed approached by people who claimed to be “interested in Scientology. Our informal response—caveat emptor—was that our data suggested 25,000 +/- 300,000.” A range between 25,000 and 300,000 was arbitrarily transformed into “28,000” by the opponents of Scientology. 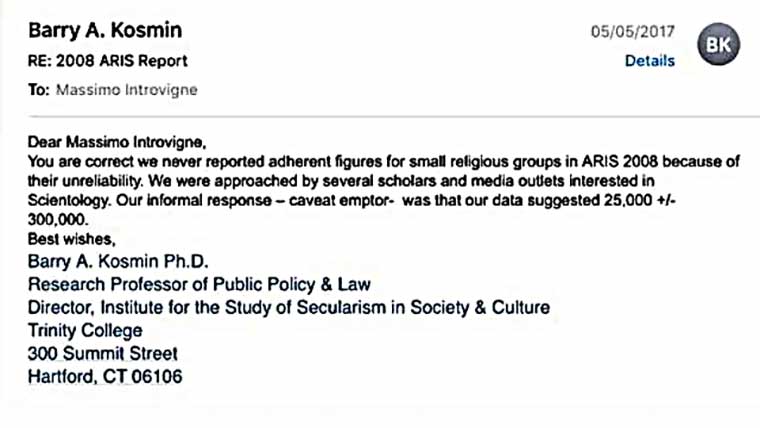 Counting Scientologists is notoriously difficult, given that nobody is “baptized” into the Church, and there are different levels of identification with Scientology. Anti-Scientology media buy the anti-cult figures, without realizing that they are sawing off the branch they are sitting on. If there are only a few thousand Scientologists in Australia, for example, how can they be a danger so significant that it threatens the whole country?

Opponents insist on finding something fishy in the fact that Scientology keeps building large “Ideal Orgs” buildings that (in their opinion) are disproportionate when compared with the number of members in the countries where they are built. I grew up in Italy in the 1960s and 1970s, when this was a popular criticism of the Catholic Church. Some statistics indicated the number of active Catholics as shrinking, yet new large churches were built. The controversy died a natural death when the media realized what scholars had known all along, that religious buildings do not only serve a functional purpose and do not grow bigger only when they should accommodate more devotees. There are several non-functional reasons explaining religious architecture, and there always were.

All this is largely folklore. What has practical implications is the call to consider “religions that do not provide charitable services—for example, hospitals or shelters for the homeless—” as “not eligible for tax concessions.”

In the case of Scientology, French scholar Bernadette Rigal-Cellard has argued that a number of services it provides, although different from “hospitals or shelters for the homeless,” are indeed charitable, and the Australian media and the legal scholar they quote on this point are thus factually wrong. Managing hospitals and shelters is not the only way a religion can provide “charitable” services, as evidenced by Scientology’s efforts during the COVID-19 pandemic. 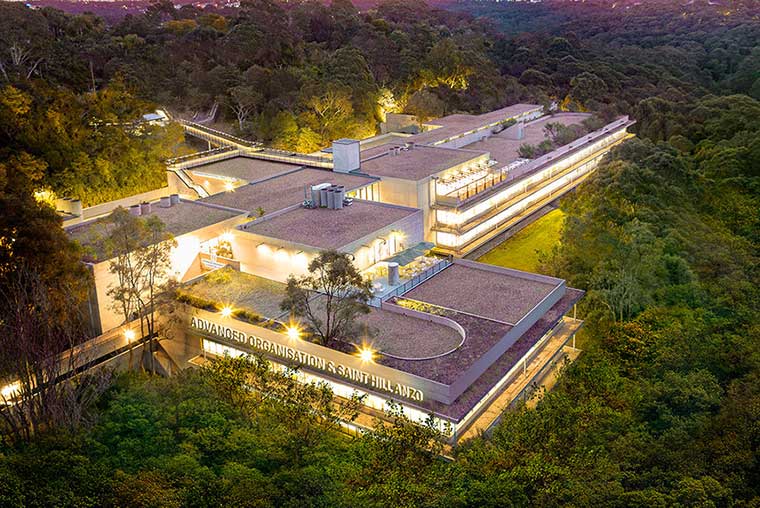 However, the controversy needs to be understood within the Australian context. There is a context specific to Scientology, whose story has been told by Doherty and James T. Richardson in the article “Litigation, liberty, and legitimation: the experience of the Church of Scientology in Australian law,” published in issue 247 for March-April 2019 of the Australian scholarly journal St. Mark’s Review. Two sentences of this valuable study are quoted out of context in the Nine Publishing anti-Scientology campaign. In fact, the article warns against discrimination of religions made unpopular by anti-cult campaigns, and reconstructs how Scientology, once banned in several Australian states, won recognition as a religion by the High Court of Australia through a landmark decision rendered on October 27, 1983. As Doherty and Richardson summarize, the High Court, after “a quite sophisticated analysis of characteristics to consider in defining religion,” “firmly established” that “Scientology met any reasonable criteria for a religion.” The Australian decision has subsequently been quoted as a model in several foreign cases.

But the relevant Australian context goes beyond Scientology. In 2012, Australia established the Australian Charities and Not-for-profit Commission (ACNC) and in 2013 it passed a new Charities Act. The Act confirmed previous Australian legislation, and included among the “purposes presumed to be for the public benefit” “the purpose of advancing religion” (Part 2, Division 2, 7[e]). Interestingly, the Catholic Church, which certainly operates hospitals and shelters, insisted that limiting the definition of public benefit to material charitable activities (excluding the spiritual ones) would be seriously detrimental to religious liberty.

Those who lobbied for a different model did not give up, however. They were supported by the media company Fairfax (now part of Nine) that published aggressive articles against the Plymouth Brethren Christian Church (which sued Fairfax and won), Scientology, and the Jehovah’s Witnesses. A reductive definition of “charity” would have allowed to exclude from the charities’ fold these groups Fairfax, for whatever reason, did not like.

One of the most active proponents of a reform of the Charities Act that would exclude the presumption of public benefit for religious charities was controversial Senator Nick Xenophon. He made no mystery that he wanted provisions that would allow to de-register both Scientology and the Plymouth Brethren Christian Church, two religions he looked at through heavy anti-cult lenses. Xenophon did not succeed, but since at that time he had some political weight, he was appeased by including in the Charities Act 2013 a provision in article 6(2)(b) allowing to de-register charities whose activities cause “identifiable detriment” to “the general public or a section of the general public.” However, this provision was never enforced to de-register any charity, and there are scholars doubting it is enforceable at all.

In 2018, Xenophon was not re-elected, and he is now busy representing Huawei against what he calls “false and totally unsubstantiated claims” that the company is so connected with the Chinese Communist Party that it represents a security risk for Western countries.

“I have had enough of politicians and they have probably had enough of me,” Xenophon said. Yet, some media seems to continue his misguided campaigns to amend the Charities Act or re-interpret its “public benefit” notion to discriminate against certain religions.

They would do better to meditate on the remarks of the High Court of Australia, directed at those who had tried to deny to Scientology the status of religion: “Religious discrimination by officials or by courts is unacceptable in a free society. The truth or falsity of religions is not the business of officials or the courts. If a purported religion had to show that its doctrines were true, then all might fail. […] In the eyes of the law, religions are equal. There is no religious club with a monopoly of State privileges for its members. The policy of the law is ‘one in, all in.’”