CCP Launches Disgusting Campaign to Discredit Witnesses of Its Atrocities The full force of the Party’s propaganda is deployed against women and men who dared to speak. Even their relatives in China are compelled to testify against them.

by Ruth Ingram — The Chinese government is running a concerted campaign to malign, discredit and terrorize Uyghurs who have lost touch with loved ones, in an attempt to claim the moral high ground in its propaganda war on terror.

A text message out of the blue from a relative begging them to return, hounding calls from officials, or as in Aziz Isa Elkun’s case, a Chinese news feature with his elderly mother, castigating him for being a bad son, strike terror in the hearts of traumatized exiles, leaving them in a no man’s land of grief and longing.

So-called “Proof of Life videos” are the latest tactic employed by the CCP to turn the tables on members of the Uyghur diaspora who dare to speak out about the atrocities being meted out on their relatives, friends, and colleagues, trapped in the dark web of internment and disappearance in Xinjiang.

The US-based Uyghur Human Rights Project has analyzed 22 Chinese government-orchestrated clips in which the “disappeared,” the “imprisoned,” the “interned” and ostensibly, according to Chinese news outlets, “persecuted” family members of exiled Uyghurs are paraded as healthy and alive, and highly critical of their sons and daughters who dare to claim otherwise.

Emily Upson, author of the report, “The Government Never Oppresses Us” discussed her findings in a recent webinar, and traced the development of CCP finesse in exposing exiled activists, blackening their names and questioning their moral character.

The first, rather crude “proof of life” clip followed swiftly the rumor that beloved singer and musician Abdurehim Heyit had died in custody while serving an eight year prison term for his composition alluding to “martyrs of war.” The clumsy, hostage style video against a grey tiled background, refuted the assertions by parading the shaven headed Heyit to reassure his fans that he was in “good health,” and had “never been abused.” 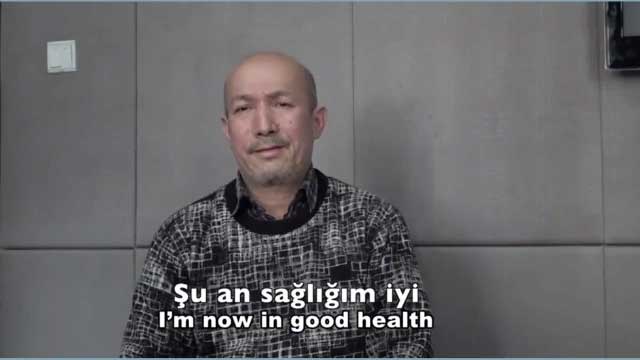 “I am now in good health”: screengrab from a video of Heyit released by China Radio International’s Turkish service.

The knock-on effect of Heyit’s appearance and cynically scripted speech backfired on Beijing by provoking a flurry of activist-led hashtag campaigns such as #MeTooUyghur and #MenmuUyghur from the diaspora, demanding proof of life confirmation of their own relatives.

A flurry of Chinese state videos has followed, each with increasing degrees of sophistication and plausibility, designed to refute specific allegations from heads of state and exiles and introduce doubt and suspicion into the mix. Many purport to be investigative pieces by journalists who set out down long dusty roads, on a mission to retrieve the lost relatives and redeem the reputation of China. They are met by outraged families, dismayed by the unpatriotic behavior of their children, who urge them to return repentant to the bosom of the Party.

Ferkat Jawdat, who had been a successful software engineer in the States for eleven years, never set out to be an activist. He was joined in the US by his father in 2006 and three brothers in 2011, and they had tried every legal means to bring their mother to the USA to join them but failed, despite agreement by the US that she could come. Not only was she refused a passport to travel, but she was interned twice for “re-education” and eventually sentenced to seven years imprisonment in 2018. This was the last straw for Jawdat, whose subsequent media campaign for his mother reached the incensed ears of Beijing. They resorted to a smear campaign by calling him “scum,” in league with Michael Pompeo, the day after US determinations of a CCP lead genocide against the Turkic people in Xinjiang, and accusing him of being “an agent of Bin Laden.”

The final insult was to parade his mother, Munawer Tursun, on the Global Times, praising her life under the CCP, and his uncle Anwar Tursun condemning his “terrible” activities in the USA. She called her son “trash” and “a stain on the family.” As a side ball, completely unrelated to her son’s case, she threw in her disdain for Rebiya Kadeer, whom she called, a “separatist” and a “degenerate among Uyghurs.”

The CCP was not to know, however, that their tactics would be later exposed by a western journalist who managed to locate Munawer in Xinjiang, and discover a more sinister back story. She described the stage management, the scripting, the hours posing with various kinds of fruit and manipulation of the set. Because of the publicity surrounding her case, Ferkat now speaks with his mother every day, and has learned her true feelings towards him.

Others, however, are not so fortunate, and are deeply wounded by insults and hatred levelled at them in public by their dear ones. The report named a string of Uyghur activists all of whom have been castigated by their families. Arafat Erkin, who has been searching for his elderly father since 2018, was hauled up by his uncle for committing “shameful deeds.” Zumrat Dawut, a camp survivor, who was interned and forcibly sterilized, heard her family call her a liar to her face and accuse her of mistreating her father. They blamed her activism for his death, with no mention of his detention in October 2019.

London-based Aziz Isa Elkun (came under special scrutiny when he exposed the destruction of Uyghur cemeteries, including the grave of his own father in April 2019. He had been forced to lose touch with his 78-year-old mother Hepizem since the clampdowns in 2016, and was shocked when he saw her featured during a knee jerk CGTN probe into his allegations. His heart broke when he saw his father’s antiseptic new grave and heard his own mother lashing out at him, her only child. (Bitter Winter published last year evidence that the CCP television had lied).

But a unique treasure trove of insults has been reserved for the women who have witnessed and experienced firsthand the sexual abuse of female camp detainees, and dared to speak out. Their exposés have shocked the world and rattled the pride of the CCP. Nothing has been spared during the full-frontal character assassinations unleashed by family, friends, work colleagues, and  community leaders to undermine their credibility.

A Global Times Twitter video lashing out at Sayragul Sauytbay following her escape from Xinjiang over the Kazakh border after a period of internment, concluded its volley by commandeering the Vice-chairwoman of the Women’s Federation in Zhaosu county to call her a “child abuser,” an inveterate liar, a “degenerate member of all women,” and a “scumbag.”

Trying to make sense of these proof of life videos which discerning observers would immediately suspect as fake, Emily Upson said one of the aims was to cast a shadow of doubt over the witnesses in subtle ways through clever scripting and choreography. “The style is becoming increasingly plausible,’ she reflected. Despite the evidence gushing out of Xinjiang, comments on her Twitter feed still reflected the power of the CCP to sway opinions. “If people believe in China, they will believe them.”

William Nee, Research and Advocacy coordinator for China Human Rights Defenders, said that they follow the pattern of all “hostage” style appearances on China State Television. Psychological intimidation of both the detainee and families watching, manipulation into silence, defamation and discrediting witnesses and their statements, were all par for the course.

But the chilling reality, whether they are believed or not, are proof that the CCP is watching, not only the exiles, but the ones that are left behind. Regardless of words put into mouths and rehearsed scripts, they are a constant reminder that the next knock on the door will not simply be a camera crew, but a squad of machine toting police, ready to put a bag over your head and march you into oblivion. The ever-present threat of retaliation is there.

Once Ferkat’s mother was released, he was contacted on WeChat, the Chinese social media platform, by a fluent Uyghur speaking, Han Chinese agent. “He told me he was powerful, he knew everything about me and my family, and wanted to be my friend.,” said Ferkat. “He told me that he had been responsible for the release of my mother, he could also arrange  a passport and get her out of China.” “All I had to promise was to keep my mouth shut, stop speaking out and decline interviews,” he said.”

He reminded Ferkat that he was a lone voice speaking out against the might of China and was doomed to failure. “But If I stop speaking out, I will lose my voice,” said Ferkat. “I refused.” The agent then threatened him, saying that retaliation could come at any time and in any form. “Just remember,” he said, “you have many family members inside our borders.”

Pictures at top of page: Artwork by the Uyghur artist who uses the pseudonym Yettesu poignantly depicts how the cynical “Proof of Life” videos are produced in Xinjiang.

Ruth Ingram is a researcher who has written extensively for the Central Asia-Caucasus publication, Institute of War and Peace Reporting, the Guardian Weekly newspaper, The Diplomat, and other publications.