by Alessandro Amicarelli — When everything else fails, governments that, for whatever reasons, want to discriminate religious or spiritual movements they do not like use a secret weapon: taxes.

CAP-LC notes that, “Tax weapons have been often used to discriminate against religious and spiritual minorities. This is becoming a global problem, and one the human rights community should be aware of.” 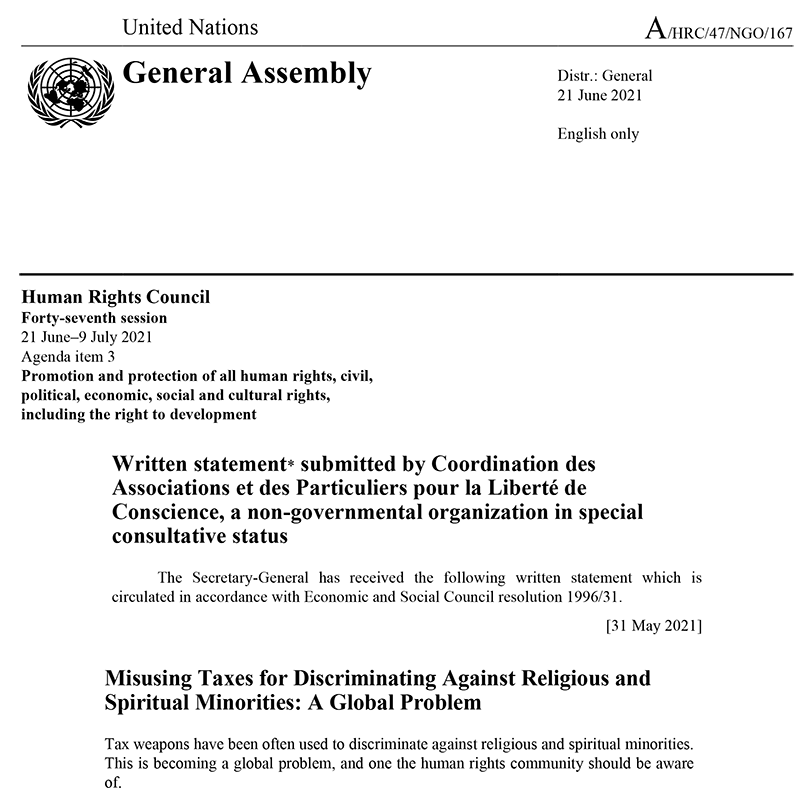 The most notorious case, not surprisingly, concerns France and its policy against “cults,” called in French “sectes.” In 1996, a French Parliamentary Commission established a list of 172 “sectes.” Even if subsequent governments stated that the list was no longer officially endorsed by the government, and acknowledged that publishing it might have been a mistake, tax offices continued to use it for claiming that “sectes” were in generally fraudulent organizations that, by arguing that the money they received from their members consisted of non-taxable gifts, were guilty of tax evasions.

French tax authorities moved against the Jehovah’s Witnesses, the Religious Association of the Pyramid Temple and the Association of the Knights of the Golden Lotus (both connected with the same movement, the Aumist Religion of the Mandarom), and the Evangelical Pentecostal Church of Besançon. 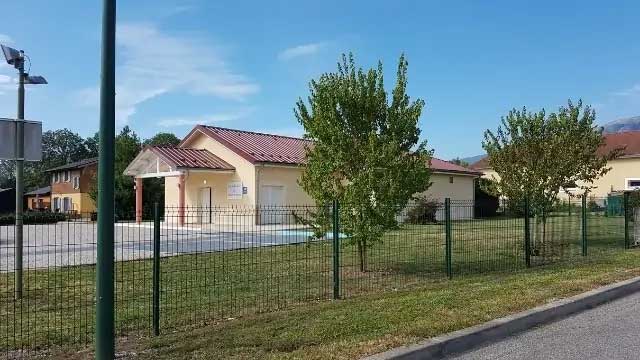 A Kingdom’s Hall of the Jehovah’s Witnesses in Crozet, France (credits).

“All these associations, CAP-LC reported, were declared ‘fraudulent’ by the tax services, and condemned to heavy tax adjustments, up to several million euros in the case of the Jehovah’s Witnesses.” But the whole matter ended up in a fiasco for the French anti-cult policy. Since France is a party to the European Convention of Human Rights, all these groups, having lost their cases in France, took the matter to the European Court of Human Rights, and won. France had to reimburse to them the full amount of the tax bills they had paid.

A similar problem, CAP-LC notes, exists in Taiwan about Tai Ji Men, “but it has international implications, since the movement discriminated against is international.”

“Tai Ji Men, CAP-LC explains, is a spiritual and self-cultivation menpei (similar to school) teaching qigong, with roots in esoteric Taoism, and with a global outreach through its cultural activities and dedication to promoting a culture of love and peace, and the Movement of An Era of Conscience. In 1996, Tai Ji Men was among the victims of an ill-fated crackdown on new religious movements, which was started largely for political reasons. The indicted Tai Ji Men leader, Dr. Hong Tao-Tze, the founder and master of the spiritual school, and members were later fully exonerated from all criminal charges. However, as a by-product of the 1996 events, the National Taxation Bureau (NTB) moved against Tai Ji Men accusing it of tax evasion, claiming that the gifts members give to their spiritual master in the so-called ‘red envelopes’ are in fact taxable tuition fees for a cram school.”

Taiwan’s highest courts ruled that there was no cram school, nor tuition fees nor tax evasion, and the content of the ‘red envelopes’ consisted of non-taxable gifts. The NTB, reports CAP-LC, “after twenty years of court cases, finally agreed to correct the tax bills it had levied against Tai Ji Men to zero except the year 1992. Once again, it is difficult to understand that the NTB’s correction of the tax bills excluded the 1992 tax bill,” although the NTB argued that for that year all appeals had been exhausted, and so the NTB was unable to revoke the tax bill.

“The NTB’s position, CAP-LC writes, was obviously against justice. If the content of the red envelopes is not taxable for all the other years, it cannot be taxable for 1992 either. However, the NTB remained deaf to the voice of the Supreme Court, which had conclusively established that these offerings are non-taxable gifts, and the appeals by international scholars and human rights organizations. The NTB once even promised to withdraw the erroneous tax bill, but eventually ignored its promise.”

In 2020 this drama, in the words of CAP-LC, “advanced towards a sad denouement. The Enforcement Agency seized and auctioned Dr. Hong’s properties and, after two auctions failed, transferred land intended for the construction of a Tai Ji Men self-cultivation center as payment of the taxes for 1992, which should not have existed in the first place.” 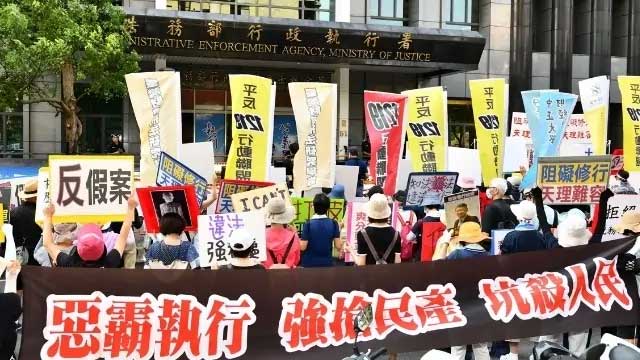 Tai Ji Men protests in front of the Enforcement Agency

CAP-LC insists that this is not a domestic Taiwan matter as “it affects all Tai Ji Men dizi (disciples), who are present in several countries.” It is not merely a tax case either (if it was, Tai Ji Men would have settled it long ago, spending much less money than what they used for legal expenses) but a freedom of religion or belief (FORB) issue of global relevance.

“We represent, says CAP-LC, an NGO active in the field of religious liberty. We see, every day, cases of religious persecution where human lives are lost. It may seem that, compared to extra-judicial killings and tortures, taxes are but a minor matter. However, intolerance and discrimination are preliminary steps, often leading to human rights violations.” CAP-LC notes “a widespread concern that tax system laws may be used in several countries to discriminate against religious and spiritual movements that some politicians, for whatever reason, do not like. The European Court of Human Rights and courts in the United States of America have stated that such use of the tax system is inappropriate and illegal. Worst of all, many people have no way of seeking redress, and even if they do, they are treated unfairly and irrationally, rendering the remedy system ineffective.”

CAP-LC asks “all countries and all women and men who cherish freedom of religion or belief to take a firm stand against the improper use of taxes as a weapon of intolerance and discrimination, to uphold the basic human rights guaranteed by the Universal Declaration of Human Rights.”

Although Taiwan is not a member state of the United Nations, it has declared its intention to enforce the Universal Declaration of Human Rights. Just as France did, it should thus correct the consequences of its past wrongdoings.