Shouters: Persecuted in China and Entitled to Asylum, Court of Rome Says An important decision recognized refugee status to members of groups classified as “xie jiao” by the CCP.

by Massimo Introvigne — In China, the popular nickname “Shouters”[1] designates a network of different groups claiming to follow the tradition of Chinese Protestant ministers Watchman Nee (1903–1972) and Witness Lee (1905–1997). There are also followers of these preachers who do not accept the label “Shouters” and claim to be different from those so designated. Shouters are banned as a xie jiao[2] by the CCP since 1983, i.e., even before the official list of xie jiao was compiled in 1995.

Under Article 300[3] of the Chinese Criminal Code, “using” a xie jiao is considered a crime punished with heavy jail penalties. Chinese case law makes it abundantly clear that “using” a xie jiao is interpreted as carrying out any religious activity on behalf of a banned group, including attending worship meetings, sharing one’s faith with relatives and friends, and even keeping at home literature of one of the proscribed movements. 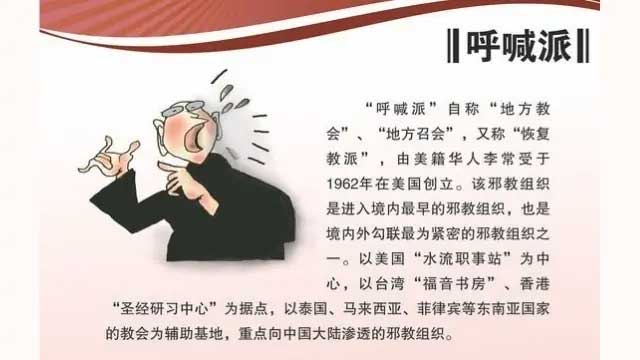 Anti-Shouters propaganda in China. From Weibo.

It should thus be clear that refugees who escape to a democratic country have a “credible fear of persecution” in China if they are known there as active in a xie jiao, and are thus entitled to be granted asylum. The study of hundreds of cases of members of The Church of Almighty God proves, however, that this is not automatic nor easy. Even when the court accepts that the refugee’s religious movement is labeled a xie jiao in China, it should still be satisfied that the asylum seeker’s individual story is credible. One frequent objection is that passports should not be granted in China to those included in the national police data base as members of a xie jiao. Since the asylum seeker got a passport, it is argued, he or she was not known to the authorities as a member of a banned group.

In the case of The Church of Almighty God, a case law has developed in democratic countries where both the persecution of the church in China and the passport issue have been discussed in hundreds of decisions. Cases about the Shouters are much rarer, and this is why the decision rendered by the Justice Court of Rome on February 2, 2021, whose grounds have just been published, is significant.

The case concerned a male member of a Shouters congregation, whose father, also a devotee of the same group, had been arrested in 2013 and sent to a transformation through education camp. The son continued the father’s evangelistic activities, and eventually became the proselytization leader of his local Shouters congregation. In 2016, the son was arrested, beaten, and tortured for 24 hours, and then sent home and kept under surveillance. He reported that through a “cousin” he ascertained that his name was not in the national police data base, and was also able to bribe police officers to get a passport, with which he escaped to Italy. Maybe the “cousin” was really a relative, but expressions like “cousin” and “uncle” often hides the intervention of organized crime.

The Italian administrative commission that examined his case did not find the story of how he obtained the passport believable, nor that the police did not record the arrest, and denied the asylum.

The Justice Court of Rome, on appeal, reversed the administrative decision. In a well-motivated decision, it started by explaining that only the five authorized religions are legal in China. With an implicit criticism of recent Italian decisions that said otherwise, it explained that there is no way in China nor procedure for new groups to be accepted as an authorized religion. Protestant movements can only join the Three Self Church, but this means renouncing their identity and becoming part of a government-controlled system.

Then, the judges explored the concept of xie jiao and Article 300 of the Chinese Criminal Code, and reiterate that being an active member of a xie jiao is enough to be sent to jail in China. They mentioned several documents proving that the Shouters are listed as a xie jiao, and that their persecution in China continues.

They also found the applicant’s story credible, quoting precedents of refugees from The Church of Almighty God. Importantly, the court accepted as credible that the local police did not record the applicant’s arrest in the national data base, and that through the “cousin” he was able to corrupt the officers and get his passport. Why the police did not record the arrest may be guessed from the fact that they confiscated all the money they found in the applicant’s home. In these cases, by not recording an arrest, the police are able to keep the money for themselves.

[1] ⬆︎ (呼喊派). Opponent, the CCP and Chinese media called “Shouters” the members of the Local Church since the late 1970s, because of their practice to shout the name of the Lord Jesus Christ loudly. The Shouters were declared a xie jiao and banned in 1983, well before the first official list of the xie jiao was published in 1995. In China, “Shouters” and “Local Church” are often used as synonyms, although the leaders of Witness Lee’s branch of Local Church, whose headquarters are in Anaheim, California, insist that in China the Shouters are now a constellation of different groups, not all of them in contact with, or endorsed by, their organization in the U.S.

[2] ⬆︎ (邪教). Often incorrectly translated as “evil cults,” the expression xie jiao (which has been used since the late Ming era) means “heterodox teachings” and indicates the religious movements included in the list of the xie jiao, which  the government regards as hostile to the CCP, dangerous, and not “really” religious. Xie jiao are prohibited, constitute the black market of Chinese religion, and being active in a xie jiao is punished with severe jail penalties under Article 300.

[3] ⬆︎ The dreaded Article 300 of the Chinese Criminal Code punishes with 3 to 7 years of imprisonment “or more” those who “use” a xie jiao. Case law shows that “using” a xie jiao is an expression interpreted by Chinese courts as being active in a xie jiao in any capacity. In some cases, being found in possession of literature of a xie jiao has been regarded as sufficient for the application of Article 300.