The Persecution of the Ahmadis in Pakistan. 4. “Democratic” Persecution The worst court decision justifying the persecution of Ahmadis was rendered in 1993. Nor did the situation improve later.

by Massimo Introvigne — As we have seen in the previous articles, the military regime of General Zia created with blasphemy laws and Ordinance XX the most effective legal tools to persecute the Ahmadis. When at the end of 1988, Benazir Bhutto became Prime Minister, Ahmadis initially believed in her promises of respect for minorities, although they also remembered that her father Zulfiqar Ali Bhutto, before being deposed and executed by Zia, had also enacted anti-Ahmadi legislation.

Their hopes were quickly disappointed. Benazir Bhutto did not touch Ordinance XX, and answered international criticism by arguing that several cases were pending before Pakistan’s Supreme Court, and whether the anti-Ahmadi ordinance was compatible with the Constitution was a matter to be solved by the judiciary.

In 1990, Bhutto lost her position as Prime Minister after a corruption scandal. New elections were called, and Nawaz Sharif became Prime Minister. She returned to power with the 1993 elections. Bhutto was accused of corruption and dismissed again in 1996, which led first to the re-election of Sharif and then to the military coup of 1999, which installed General Pervez Musharraf as president. 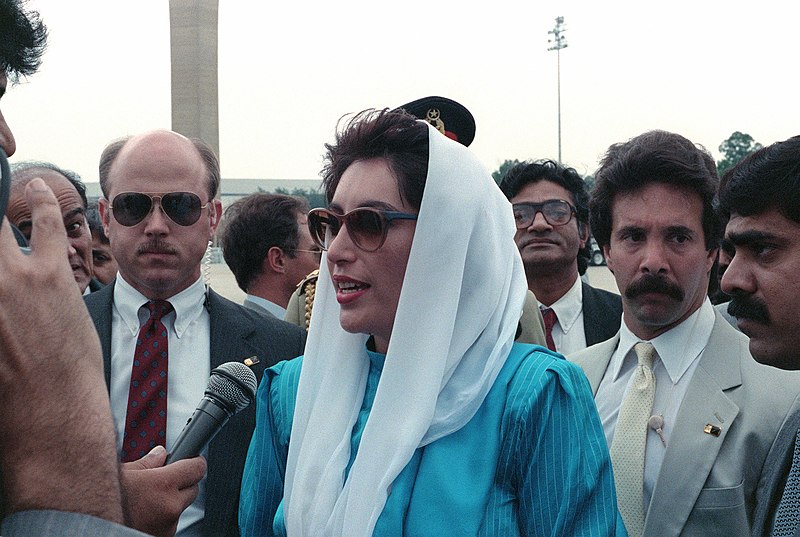 Benazir Bhutto arrives in the U.S. for an official visit, 1994 (credits).

The democratic era of 1988–1999 did not lead to an improvement in the situation of the Ahmadis. On the contrary, on July 3, 1993, the Supreme Court in Zaheeruddin v. State ruled on five cases where Ahmadis had been found guilty of violating Ordinance XX, and decided that the statute was constitutional.

Interestingly, the court used an intellectual property argument to argue that the Ahmadis would be prevented from calling themselves Muslims or using Muslim symbols even in Western countries. The Justices recognized (or invented) common law trademarks for the word “Muslim” and the main Muslim symbols, declared the Muslim community the owner of such unregistered intellectual property, and stated that the Ahmadis were guilty of (criminal) trademark infringement.

As legal scholars have demonstrated, however, this was a faulty argument, since American and other Western courts have repeatedly decided that, while the names and symbols of smaller religious organizations may be validly registered as trademarks, broader religious names such as “Christian,” “Jew,” and even “Baháʼí” cannot become valid trademarks, and different organizations should remain free to use them. Besides, who can represent the “Muslim community” and own a trademark on its behalf was not really explained.

Faulty at it was, the decision not only affirmed the validity of Ordinance XX but triggered new anti-Ahmadi riots. While the Supreme Court had commented that Ahmadi religion cannot be called Muslim nor propagated, but Ahmadi lives should be protected against mob violence, its verdict was intended as a license for further persecution of the Ahmadiyya by local courts, the police, and Muslim extremists. 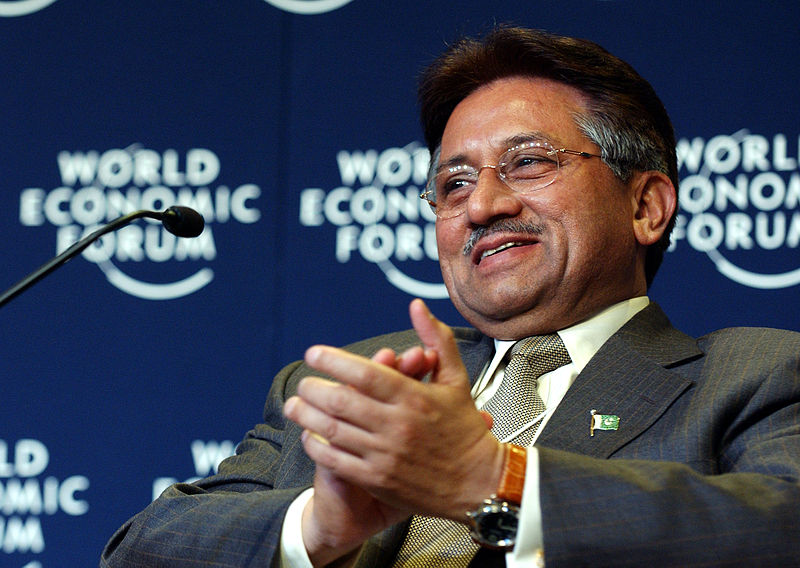 During the Musharraf military regime that replaced the democratic rule in 1999, riots were less frequent as the military maintained a tighter control on the territory, but Ordinance XX remained in force, and Ahmadis were still discriminated.

On December 27, 2007, Benazir Bhutto was assassinated in Rawalpindi, while she was campaigning for the elections scheduled for 2008. The assassination was one of the elements that led to the fall of President Musharraf and the transition to a second democratic period, which continues today.

It is, however, a partial democracy only, as the rights of the religious minorities are not guaranteed. Ahmadis are excluded from political life through a perverse mechanism we will examine in our next article, and continue to be targeted by violence, with perpetrators often claiming that Ordinance XX justify their actions.

A count for the years between 1984, when Ordinance XX was passed, and 2020, includes 269 Ahmadis who were killed in Pakistan, but thousands were wounded, lost their homes, their jobs, and their mosques. 86 Ahmadis were killed only in the attack against two Ahmadi mosques in Lahore on May 28, 2010. 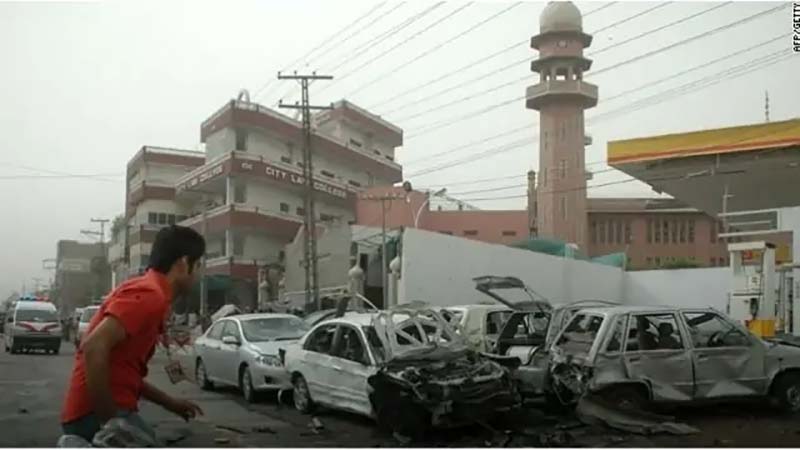 While these attacks were carried out by extremists, although with the police turning a blind eye, other Ahmadis were victims of the police itself. One is Abdul Qadoos, who was arrested by police in Chenab Nagar (Rabwah) in January 2012, and falsely accused of a murder. He was tortured for two months, then freed and left lying on a street. Taken to the hospital, he died on March 30, 2012.

Not even foreign Ahmadis visiting Pakistan are safe. US cardiologist Dr Mehdi Ali Qamar was shot dead in front of his wife and infant son when visiting a cemetery in Rabwah, Punjab, on May 26, 2014.

In 2014, anti-terrorism laws were enacted in Pakistan. However, rather than protecting Ahmadis, they were used to ban their publications and sending the police to raid their TV channel.

On July 27, 2014, anti-Ahmadi riots erupted at Kachi-Pump in Gujranwala. Ahmadi homes were set on fire. An Ahmadi woman, Bushra Bibi, and her two granddaughters Hira (eight months old) and Kainaat (seven years old), remained trapped in one of the homes and died. Another woman, who was pregnant, suffered a miscarriage. Eight Ahmadi women and children had to be hospitalized. 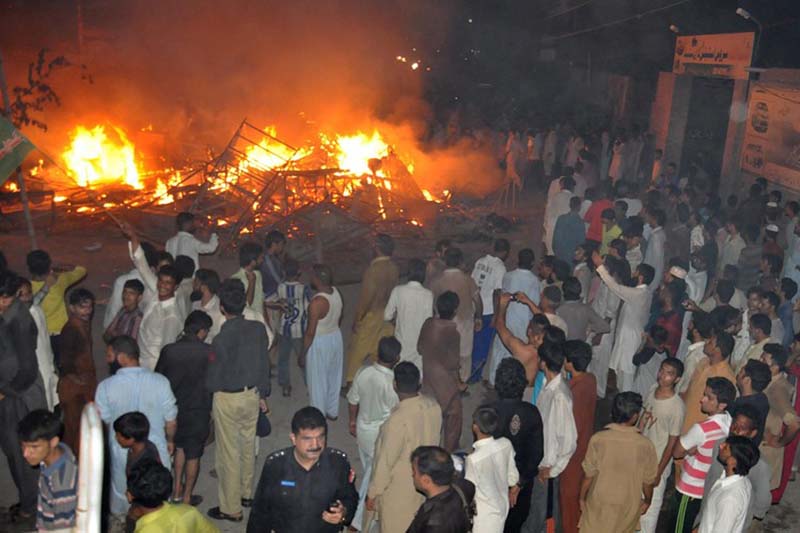 On December 12, 2016, an Ahmadi mosque in Dulmial, Chakwal, was attacked and set on fire by a mob. One of the local Ahmadis died of a heart attack during the incident. On 23 August 2018, another Ahmadi mosque in Ghaseetpura, Faisalabad, was attacked, and five Ahmadis were wounded by gunshot. 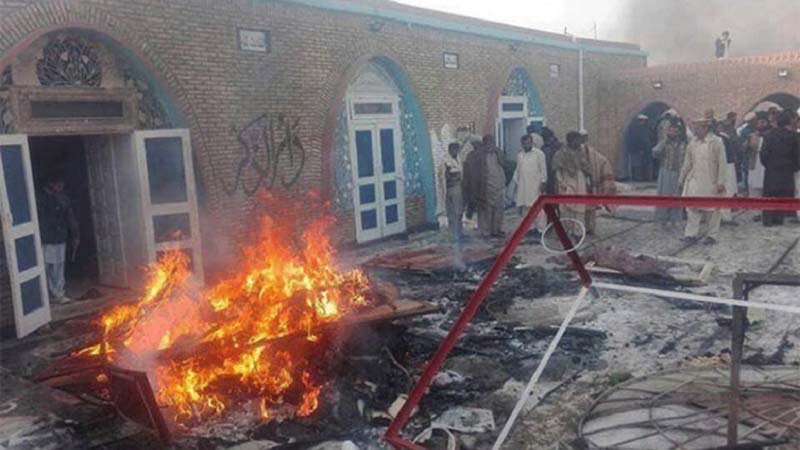 On May 24, 2018, rioters destroyed an historic Ahmadi mosque in Sialkot. They told the police they were authorized to do so by Ordinance XX, as the mosque “offended Muslim feelings,” which is prohibited by the ordinance. The police sided with them, and arrested two Ahmadis who tried to oppose the rioters. On October 25, 2019, the police itself seized the Ahmadi mosque in Murad, Bahawalpur district, and destroyed a large section of it.

Several Ahmadis have been arrested and charged with blasphemy, which is much worse than being accused of violating Ordinance XX, as blasphemy is punished with the death penalty. Some of those accused of blasphemy remain in jail today.
Dozens of Ahmadi graves and cemeteries have been desecrated. Muhammad Abdus Salam, one of the world’s leading physicists and a Nobel Prize laureate, had the word “Muslim” erased from his grave in Rabwah, Punjab, because he was an Ahmadi. 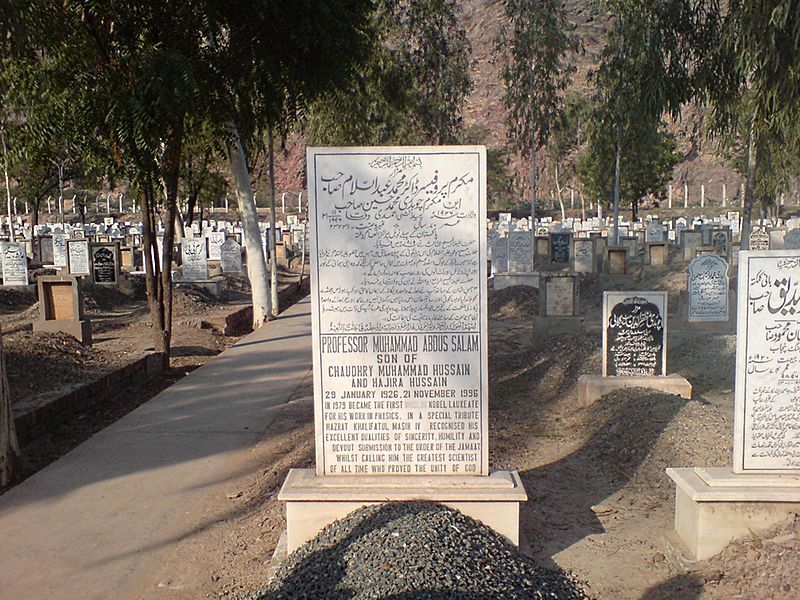 The grave of Muhammad Abdus Salam, with the word “Muslim” obliterated (credits).

Routinely, Ahmadis are bullied in schools, discriminated in the workplaces, or lose their jobs.

These are only some of the incidents targeting the Ahmadis in Pakistan’s recent history. Bitter Winter regularly report on attacks, including murders, and discrimination. Until Ordinance XX remains part of Pakistani law, Ahmadis will continue to be persecuted. Nor, as we will see in the next article of the series, can they hope to rectify this situation by participating in the democratic political process.