The Fall of “Brainwashing” Theories in the Late Twentieth Century by Massimo Introvigne — One of the most tragic consequences of “brainwashing” theories applied to religious minorities is that they were used to justify the illegal practice of “deprogramming,” created by Ted Patrick in California and flourishing in the 1970s. If their sons and daughters had been “brainwashed,” these parents felt justified in hiring “deprogrammers” who claimed to be able to kidnap the “cultists,” detain them, and persuade them, more or less violently, to abandon the “cults.”

In the same years, the academic study of the new religious movements was born, both in the United States and the United Kingdom. The scholars who studied the movements criticized as “cults” found that conversions to them happened much in the same way as conversions to any other religion, and only a small percentage of those attending the courses and seminars of groups like Unification Church, studied in depth by Eileen Barker and where allegedly miraculous techniques of “brainwashing” were used, joined the groups. Empirical evidence confirmed that there was no “brainwashing” or mental manipulation, and these labels and theories were not less pseudo-scientific than the ancient claims that “heresies” converted their followers through black magic.

The scholars were successful in marginalizing the use of the word “cult” and the “brainwashing” theories in the academic community, but the controversy moved to courts of law. Deprogramming had become a very lucrative profession, and a cover for other illegal activities, some law firm believed former members can sue new religious movement claiming damages for “brainwashing,” and substantial financial interests had entered the field. 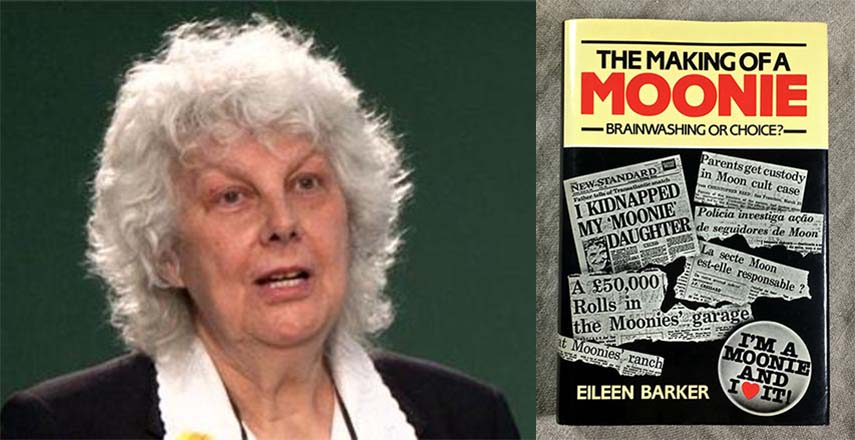 Eileen Barker’s 1984 book “The Making of a Moonie” had a crucial influence in debunking brainwashing theories as pseudo-scientific.

It took a good decade for the majority scholarly opinion, that “brainwashing” and mind control were pseudo-scientific theories, to prevail in courts of law. The decisive confrontation happened in the US District Court for the Northern District of California in 1990, in the Fishman case. Steven Fishman was a “professional troublemaker,” who attended the stockholders’ meetings of large corporations for the purpose of suing the management with the support of other minority stockholders. He then signed settlements and pocketed the money paid by the corporations, leaving the other stockholders who had trusted him empty-handed. In a lawsuit brought against him for fraud, Fishman claimed in his defense that at the time he was temporarily incapable of understanding or forming sound judgments, because he was a member of the Church of Scientology since 1979, and as such had been subjected to “brainwashing.” Scientology was not a part of the suit, and had nothing to do with Fishman’s wrongdoings (although years later Fishman would falsely claim otherwise).

Having examined in detail the documents of the scholarly discussion about “brainwashing,” Judge S. Lowell Jensen concluded that “brainwashing” and mind control “did not represent meaningful scientific concepts,” and while defended by a tiny minority of academics, had been rejected as pseudo-scientific by an overwhelming majority of the scholars studying new religious movements. Singer’s testimony was declared not admissible, and Fishman went to jail.

Fishman was the beginning of the end for the use of “brainwashing” anti-cult theories in American courts. For anti-cultists, worse was to come in 1995, when deprogrammer Rick Ross was involved in a civil trial after he had unsuccessfully tried to deprogram Jason Scott, a member of the United Pentecostal Church, a 5-million strong Christian denomination few would regard as a “cult” or a new religious movement. Scott was supported by Scientology lawyers and detectives, which proved that his mother was referred to Ross by the Cult Awareness Network (CAN), at that time the largest American anti-cult movement. CAN was sentenced to pay millions in damages, and went bankrupted. CAN’s name and assets were purchased by a Scientology-related group, which allowed sociologist Anson D. Shupe and his team free access to CAN archives. They concluded that the former CAN’s practice of referring the parents of “cult” members to deprogrammers was not an occasional occurrence but happened regularly. In turn, the “deprogrammers” kicked back to the “old” CAN hefty (and probably illegal) commissions.

After the Scott case, deprogramming became illegal in the United States, and deprogrammers who continued their activities had to claim that they were now operating on a voluntary basis through “interventions” or “exit counseling.” Most democratic countries, and the European Court of Human Rights, also outlawed deprogramming. In Japan, deprogramming was not stopped by courts of law until the seminal decision of the Tokyo High Court in the case of Unification Church member Goto Toru in 2014, confirmed by the Supreme Court in 2015. Human Rights Without Frontiers campaigned for years on behalf of Goto, and played a crucial role in securing this decision.

Only in South Korea, deprogramming continues to this date, particularly against a Christian new religious movement, Shincheonji, notwithstanding massive street demonstrations in 2018 after a female member of that group, Gu Ji-In, was strangled to death by her father while she tried to escape the deprogrammers.

But in general, deprogramming has been truly discredited, and the Fishman and Scott decisions have created a serious barrier against the use of “deprogramming” theories in U.S. court cases. Yet, anti-cultists have not given up, as we will see in the next article of this series.