The Persecution of the Ahmadis in Pakistan. 5. Why Ahmadis Cannot Vote A perverse mechanism prevents members of the persecuted religion from voting, excluding them from the democratic process.

by Massimo Introvigne — Nobody knows how many Ahmadis there are in Pakistan, since many try to hide their religious affiliation for fear of the persecutions described in the previous articles of the series. However, they are in the millions, possibly four millions or five. Enough to be an interesting electoral constituency, and to assert their rights through the ballot box. There is only one problem about this. They cannot vote.

From 1947 to 1985, Pakistanis had the right to vote in all elections based on the simple fact of being citizens of Pakistan, irrespective of their religion. In 1985, however, a year after the infamous Ordinance XX of 1984, which we discussed in the previous articles as a statute institutionalizing the persecution of the Ahmadis, the military dictator General Zia ul-Haq decided that, if and when elections will be held, citizens will be divided in two separate electoral lists. Muslims will elect 95% of the members of the National Assembly. Non-Muslims will vote to elect the remaining 5% of the members of the National Assembly, representing religious minorities.

This was bad enough for Christians, Hindus, and Sikhs, but put Ahmadis in an impossible situation. It is a tenet of their religion that they are Muslims, and should publicly confess so, lest they commit the sin of disowning their faith. In Pakistan, however, if they say they are Muslims they violate Ordinance XX and go to jail. If they say they are not Muslims, they violate a basic principle of their faith, something they believe in conscience they cannot do. 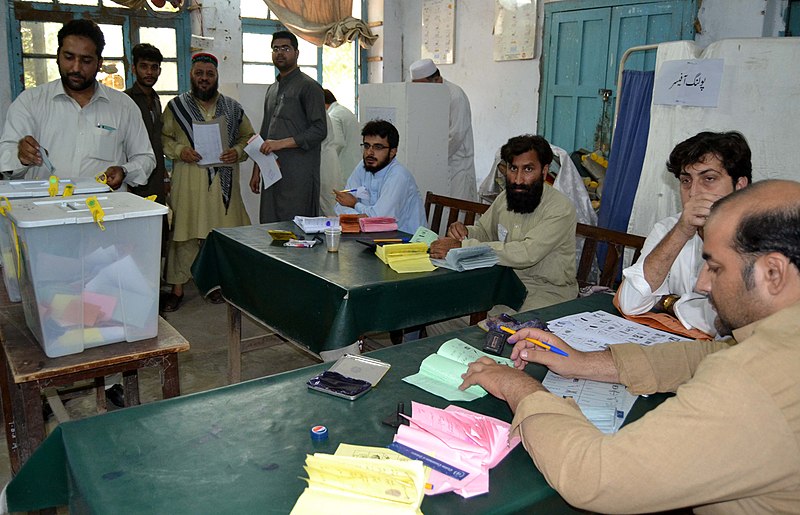 A polling station in Pakistan. Millions of Ahmadis cannot vote in the country (credits).

Nor can the Ahmadis simply declare themselves as Muslims, hoping that whoever is managing the electoral process in their polling station would not know them as Ahmadis. To prevent this, the law request the voters to show personal ID. Pakistani ID shows whether a person is Muslim or non-Muslim. To obtain an ID certifying they are Muslims, the applicants should sign a declaration not only stating that they do not recognize any prophet after Muhammad but that they regard the founder of the Ahmadis, Mirza Ghulam Ahmadi, as an “imposter.” Obviously, this is even more against the conscience of the Ahmadis than declaring that they are not Muslims. 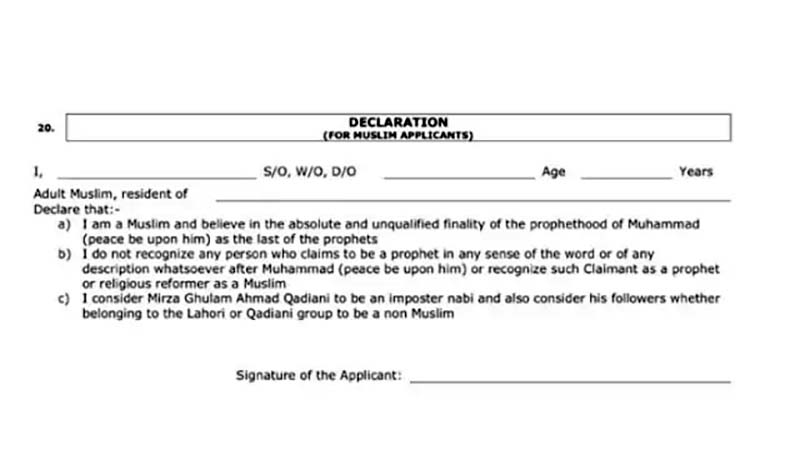 English version of the form needed to obtain ID as Muslims.

The United States repeatedly protested the 1985 Pakistani election law, and finally in 2002 another military president, Pervez Musharraf, eliminated the separate electoral colleges for Muslims and non-Muslims, and went back to the joint electoral college that existed before 1985.

When the new law was discussed, Ahmadis were excited at the prospect of participating at last in Pakistan’s electoral process. Alas, that was not to be. When Musharraf issued his executive order on the joint electorate system, he included an article 7B stating that “the status of Qadiani Group or the Lahori Group (who call themselves ‘Ahmadis’ or by any other name) or a person who does not believe in the absolute and unqualified finality of the Prophethood of Muhammad (peace be upon him), the last of the prophets, or claimed or claims to be a Prophet, in any sense of the word or of any description whatsoever, after Muhammad (peace be upon him), or recognizes such a claimant as a Prophet or religious reformer, shall remain the same.”

This means that lists of Ahmadi voters continue to be compiled, and to be registered in these lists and vote the Ahmadis should publicly declare that they are not Muslims, something they are not prepared to do for reasons of conscience. To further discourage Ahmadis from voting, these lists are made public, meaning that those who are not known as Ahmadis, if they decide to register themselves as non-Muslims and vote, will become known as members of a despised religion and exposed to discrimination and persecution.

In 2018, a case originating from a 2017 proposal to amend the electoral law with the eventual aim of eliminating the separate voters list for the Ahmadis reached the Islamabad High Court, whose judgement absolutely prohibited any step making the Ahmadis’ participation in the elections easier, and further asked that Ahmadis identify themselves as such in any document or job application. The decision went as far as to suggest that legislation should be enacted compelling Ahmadis to add a word identifying themselves as members of the religion to their last names. Justice Shaukat Aziz Siddiqui, who signed the decision, made no mystery that what he was recommending to the Parliament was to act to “completely terminate” the legal existence of the Ahmadiyya community in Pakistan.

These did not remain idle words, although Siddiqui was later in the year 2018 removed from his position after a speech in which he attacked Pakistani intelligence service ISI and his fellow judges. Quoting Siddiqui’s decision, the National Database and Registration Authority (NADRA) instituted a new policy for identity cards and passports. Applicants who are Ahmadis should sign a declaration stating, “I declare on oath that I am not a Muslim, and I belong to the Qadiani/Ahmadi religion.” As mentioned earlier, if they want to receive their ID as Muslims, they should declare that they regard the founder of the Ahmadi faith as an imposter.

The implications are dramatic. Not only the Ahmadis in Pakistan cannot vote, they may be put in the position of not having a valid ID, excluding them even more totally from social life and preventing them from traveling abroad.
It is great time for the international community to take notice of the horrific persecution of the Ahmadis in Pakistan, and act through appropriate sanctions. Mere words have proved so far ineffective.